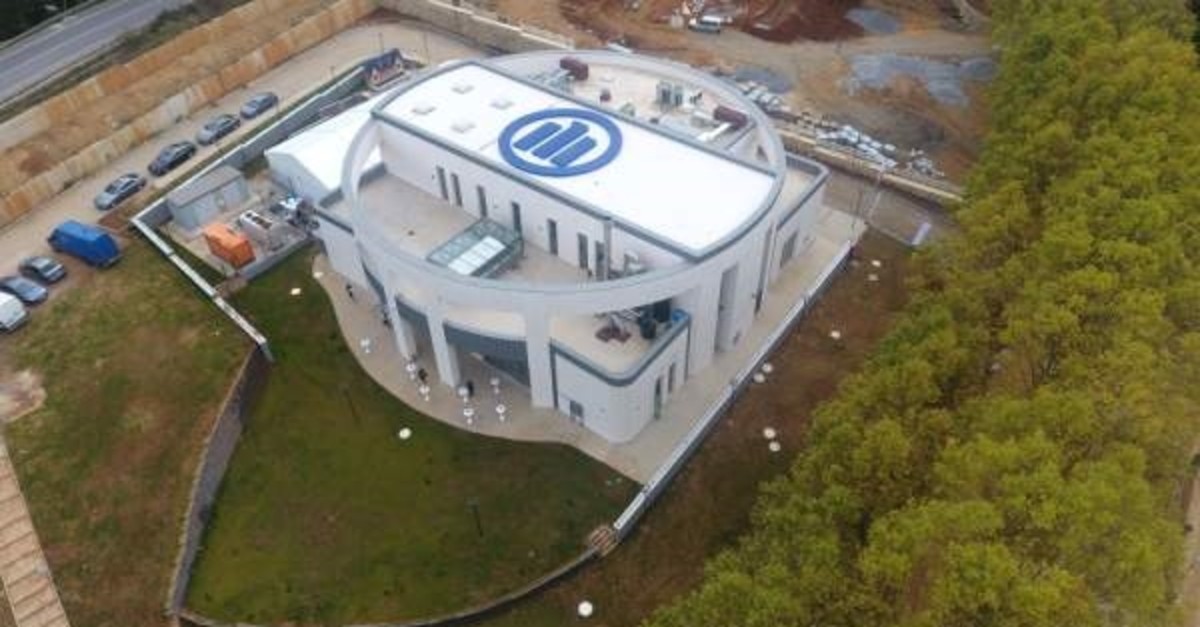 The Allianz Teknik Earthquake and Fire Testing and Training Center was established by Allianz Turkey on the Turkish-German University campus in Istanbul, Oct. 15, 2019. (AA Photo)
by Daily Sabah Oct 15, 2019 11:36 pm
The Allianz Teknik Earthquake and Fire Testing and Training Center, established by Allianz Turkey on the Turkish-German University campus with an investment of TL 30 million, was inaugurated on Tuesday.
Allianz Turkey CEO Tolga Gürkan said in his keynote speech that with Allianz Teknik Earthquake and Fire Testing and Training Center, they aim to contribute to raising risk awareness in society on earthquakes and fire hazards.
Gürkan stated that as the pioneer of the new generation insurance sector in Turkey, they achieved another first in the sector. "According to AFAD [Turkey's Disaster and Emergency Management Authority], earthquakes show the highest risk of natural disasters in Turkey with 9.3 points. However, seven out of 10 people in our country think that their house is intact even though they have not had any examination," Gürkan said.
The Allianz Turkey CEO further recalled that Turkey experienced fires with serious effects last year. "The 5.8 magnitude earthquake on Sept. 27 reminds us once again that we have a long way to go in terms of social risk awareness. The most important step that can be taken for these critical risks faced by our country is to take precautions before the risk occurs," he noted.
"The way to achieve this is to increase individual and corporate awareness. That is exactly what we have dreamed of as Allianz Turkey. With Allianz Teknik, we aim to raise awareness of social risks against earthquakes and fire hazards faced by our country."
Stressing that Allianz Teknik, which was realized with an investment of TL 30 million, is Turkey's first facility that complies with the international accreditation standards and collects fire and earthquake tests of this scale in a single center, Gürkan said they will conduct information activities against earthquakes and fires with the center, which they see as an important step in raising social risk awareness in Turkey.
Over 1 billion euros invested since 2008
Allianz Group Board Member Sergio Balbinot highlighted Turkey's strategic importance in the geographies where the Allianz Group operates. "Turkey, which has great potential in terms of increasing the share of insurance in the economy and insurance awareness in the society, ranks at the top of our long-term investment agenda. Our investment of more than 1 billion euros [$1.10 billion] since 2008 is the most important indicator of our belief and persistence in this country," Balbinot added, underlining that Allianz Teknik is a project that can set an example for the world.
"Allianz Teknik is the third test center of the Allianz Group and the group's first test center outside Germany. Allianz Teknik is also the first test center in the fields of earthquake and fire," he continued. "We show Allianz's leadership in the sector in innovation, technology-oriented new generation insurance applications, sustainability and its agile approach in business practices, as well as the successful financial results of all the countries we operate, as an example."
Turkish-German University Rector Halil Akkanat stated that the university aimed to unite the traditions of Turkish and German higher education in the fields of research and teaching. "We also consider this center as one of the most important examples of university-industry cooperation. It is our main desire to expand the cooperation realized between the two institutions with the establishment of the center in all areas," professor Akkanat stressed.
The Allianz Teknik Earthquake and Fire Testing and Training Center consists of 10 main sections: An earthquake laboratory, earthquake training hall, conference hall with earthquake simulation and spray rooms, fire training hall, fire pump room, smoke escape simulation room, clean fire simulation and a fire reaction laboratory.
Allianz Teknik, the third test center in the world after the two test centers in Munich, is also the group's first test center that serves in the fields of earthquake and fire.
With this center, which will house professional risk consultancy services, it is aimed to contribute to the training of qualified technicians and engineers for the public and private sectors by acting together with the professional organizations and universities.
Last Update: Dec 20, 2019 1:05 am
RELATED TOPICS