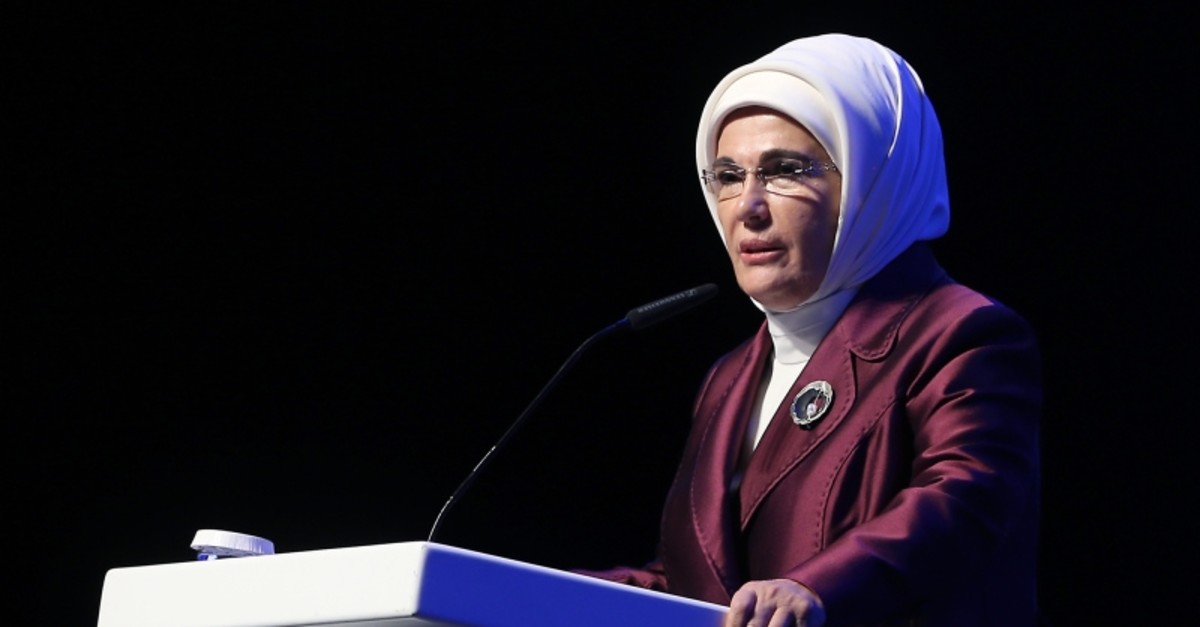 Today's cities are facing new challenges that require a reinterpretation of the city concept and development of new solutions in areas like traffic, transportation, security and waste management, first lady Emine Erdoğan said.

“This is why our next road map should be about building smart, happy and cultural cities,” Emine Erdoğan said Friday at the Kartepe Summit 2019, organized under the theme of “Urbanization and Happy Cities.”

When competition among the world’s metropolises is added to these challenges, Erdoğan said, new approaches are needed to harmonize the cultural infrastructure with the technological infrastructure.

The three-day summit kicked off in the Kartepe district of northwestern Turkey's Kocaeli, a leading winter tourism destination in the country.
Each year, the event focuses on an issue that has major significance for the world and humanity. This year’s summit shed light on the impact of urbanization on the future of humanity and the world, along with the problems and opportunities it bears.

The summit dealt with questions like how to make city-dwellers happier, against the background of the ever-growing prominence of the cities in the wider quality-of-life assessments.

The global ratio of city-dwellers over the wider population grew from 46.7% in the early 2000s to 55% by the year 2018. According to reports published by the U.N., the ratio will continue to rise to 65% by the year 2050, effectively providing living space for two-thirds of the population worldwide.
Compared to developed societies, developing nations see much faster rates of urbanization. Even though Europe and North America currently stand out with their high rates of urbanization, by 2050, Africa and Asia are expected to lead the statistics, with urbanization rates approaching 90%.

“We should adopt a human-centered approach to transforming our cities as we do in all areas. We must develop policies that prioritize the physical and mental needs of a human,” Erdoğan said, indicating they should focus more on projects where local material meets traditional architecture.

“Our cities should be more participatory and respond to the needs of young, old, women and men with special needs and people with disabilities,” the first lady said.

Erdoğan added that waste was one of the most important issues for cities, remarking that the amount of waste has increased in parallel to the increase in migration to the cities.

The first lady leads a massive nationwide recycling initiative named the Zero Waste Project and champions recycling in every field. The project is viewed as Turkey’s stepping stone into sustainability and environmental protection.

Late to effective waste management despite rapid industrialization, Turkey has sped up efforts to minimize the environmental impact and looks to set an example for the international community in waste management with the Zero Waste Project launched in 2017.

The project has been embraced nationwide. It was first applied at the Beştepe Presidential Complex and the ministries before being adopted by municipalities around the country as well as private companies and public buildings, from hospitals to schools.

"Unfortunately, plastics have taken the whole world captive," Erdoğan said. “I fear that the 21st century will go down in history not as an information or technology century, but as a ‘plastics century.’ The researches show that in 2050, there will be more plastic in the world's oceans than fish.”

The first lady said that Turkey aims to achieve a nationwide zero-waste system by 2023. She added that she had the opportunity to know closely the town of Kamikatsu in Japan, the world’s first zero-waste urban area. "It has increased our hopes for the mobilization," she said.

Thanks to the system established in Kamikatsu, local people recycle 80% of their waste by sorting the waste into 45 different categories.

“... They persist as if it is a national cause. More interestingly, the public sees in this process that in fact many materials are packed unnecessarily. This awareness is gradually becoming a lifestyle. Kamikatsu is a small example, but it shows the possibility of recycling on the scale of a residential area. Our cities should also become the cities that can exist with renewable energy sources, without consuming, ” Erdoğan said.

Speaking at the summit, Industry and Technology Minister Mustafa Varank said cities, with their dynamic structures, are the center of production, growth, innovation and knowledge.

“Our age is the age of change and transformation. Our government focuses on this aim in all the policies it implements, from education, health, and social security to justice. That is why we attach great importance to smart cities, ” Varank said.

“According to the latest analysis, the innovations brought by smart cities will contribute $20 trillion to the global economy in the next 10 years, ” the minister stressed. It means more than 27 Turkey-sized countries will join the global system, he added.

“Every new step in these technologies will give countries a significant global competitive advantage, ” he stressed, stating that they saw this opportunity and accelerated their studies in this field.

Varank added that Turkey will carry out smart city projects with support from the central government and local institutions.

He said the Industry and Technology Ministry has signed a cooperation agreement with the Environment and Urbanization Ministry and Istanbul’s Esenler district to establish a smart city in an 8-million-square-meter area. This project will be the center for electric cars, autonomous vehicles, information technologies and software, he added.

“We attach great importance to enterprises in smart cities field, we can become a key player in the $20-trillion market,” Varank said.

The Kartepe summit hosted discussions on issues related to urbanization, which continue to occupy more and more significant positions in terms of determining the quality of life for humanity. It organized several panels, conferences, forums and workshops, participated by scientists, researchers, civil society members, policymakers, decision-makers and journalists.

The first Kartepe Summit held in 2017, around the theme of “July 15, and Coup d’etats around the world,” brought together 187 participants from 26 countries presenting their views and papers. The summit ended with a declaration presented to national and international agencies, including but not limited to the U.N.

Last year, the second summit focused on the theme of “Immigration, Refugees, and Humanity.” This time, 336 participants from 31 countries shared their views with the global public, contributing to a summit declaration shared once again with the relevant national and international agencies.