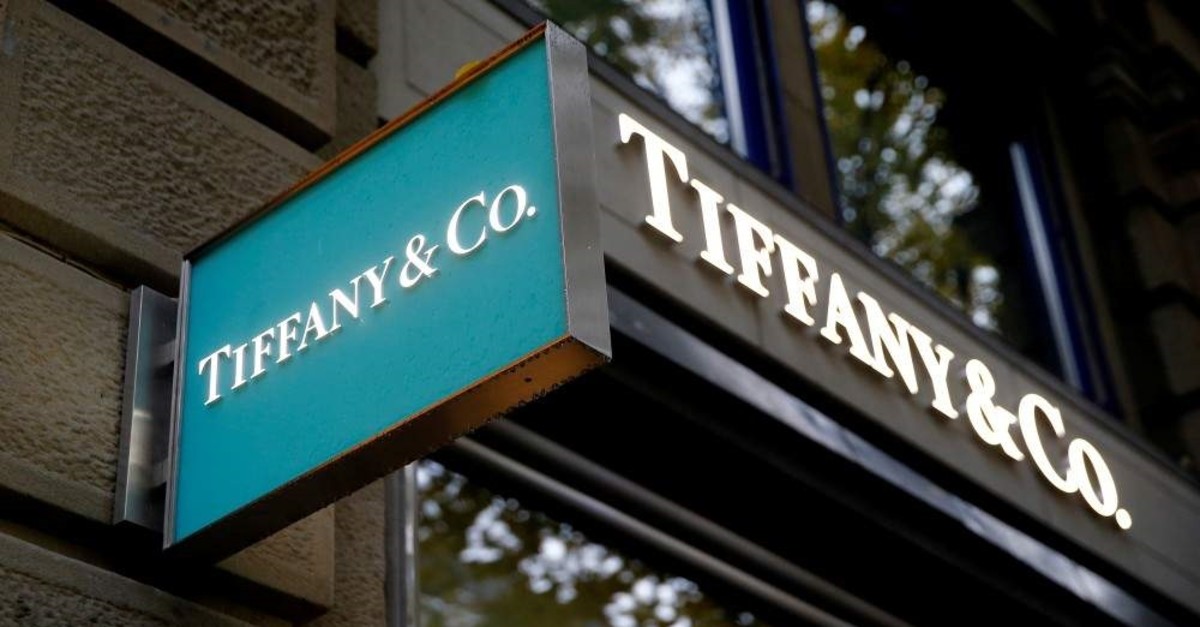 The logo of U.S. jeweller Tiffany & Co. is seen at a store at the Bahnhofstrasse shopping street in Zurich, Switzerland Oct. 26, 2016. (REUTERS Photo)
by Compiled from Wire Services Oct 28, 2019 2:13 pm
French luxury giant LVMH said on Monday it was in preliminary talks to take over U.S. jewelers Tiffany & Co. but there was "no certainty" that they would be successful.
A source told AFP at the weekend that LVMH had made a bid for Tiffany, but that the iconic U.S. company had yet to respond to the offer.
"Following recent market rumours, the LVMH group confirms having started preliminary discussions about a possible operation with Tiffany," LVMH said in its statement Monday.

LVMH has offered $120 a share, or about $14.5 billion, for Tiffany, according to the Wall Street Journal. LVMH made the offer earlier this month, Bloomberg News reported. Representatives of both LVMH and Tiffany declined to comment on the reports. Tiffany shares closed at $98.55 on Friday.

The offer comes as Tiffany has struggled with stagnating sales as China's slowing economy has weighed on spending by Chinese tourists, who make up a substantial portion of luxury spending. The strong U.S. dollar has also made Tiffany products more expensive for overseas consumers. Protests in Hong Kong, Tiffany's fourth-largest market, have also weighed on sales.

The purchase would add another household name to LVMH's plethora of upscale brands. It owns fashion names such as Christian Dior, Fendi and Givenchy as well as watchmaker Tag Heuer.
It would also give LVMH a much broader foothold in the United States and broaden its offerings in jewelry.

The offer "makes a great deal of sense," said Robert Burke, an independent fashion consultant. "This would catapult them in front of their competitors."
LVMH competes with the Kering Group, which owns Gucci and Saint Laurent, and Richemont SA, which owns Cartier.
'A girl's best friend'

"His attempt to put a $14.5 billion ring on Tiffany, having already added Bulgari a couple of years ago is likely to take the fight in this sector to its closest rival Richemont, who own Cartier, and would help LVMH in gaining better access to U.S. markets," he said.

Hewson added, however, that Tiffany shareholders were "unlikely to accept this initial bid" and could hold out for more.

But Tiffany's profits and sales have been hit hard from the fallout in the U.S.-China trade war and unrest in Hong Kong, he noted.

The luxury industry is jittery, not just over the trade war but also because of a broad anti-corruption campaign launched by Chinese president Xi Jinping which has put the brakes on extravagant gifts offered by businessmen and bureaucrats.

The discussions between the two companies come after LVMH owner billionaire Bernard Arnault inaugurated a Louis Vuitton factory in south Texas alongside U.S. President Donald Trump and his daughter Ivanka.

Tiffany's flagship New York store is next to Trump Tower on 5th Avenue.