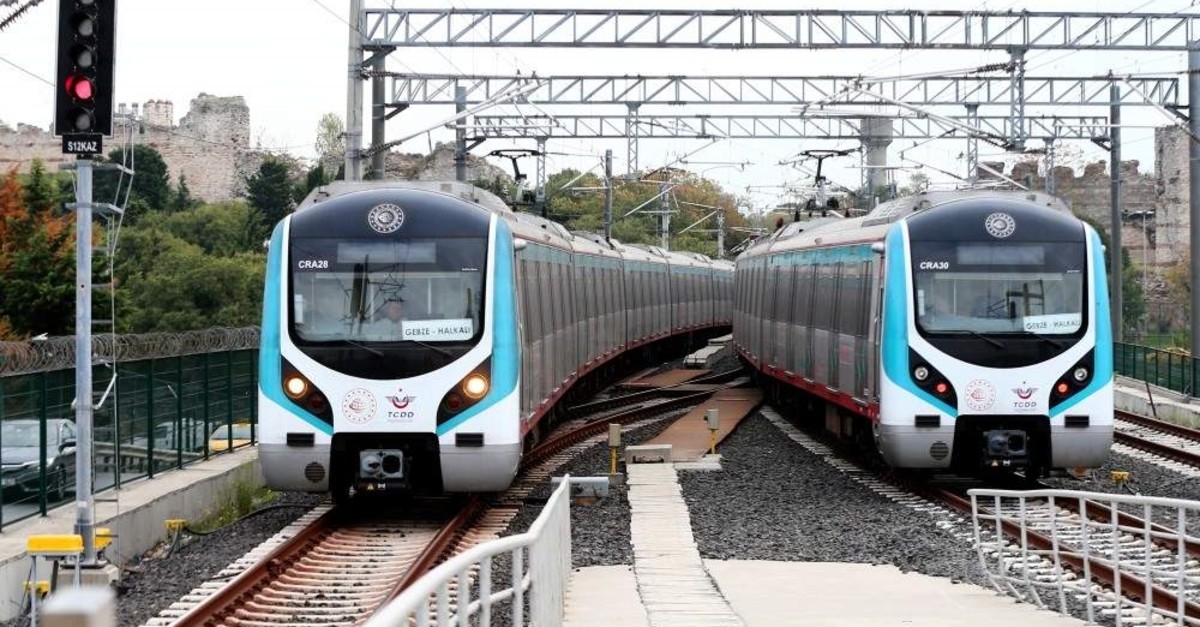 Bridging Asia and Europe under the Bosporus, the Marmaray has carried 403 million passengers since its inauguration on Oct. 29, 2013.
by Daily Sabah with AA Oct 29, 2019 11:10 pm
The Marmaray, which connects Istanbul's Asian and European sides via an underwater tunnel, has transported 403 million passengers since it was put into service six years ago.
According to the Ministry of Transport and Infrastructure, the Marmaray, which was initially the dream project of Sultan Abdülmecid, was put into service on Oct. 29, 2013 with President Recep Tayyip Erdoğan and many foreign statesmen in attendance, Anadolu Agency (AA) reported.
Commissioned on the 90th anniversary of the establishment of the republic and dubbed the "project of the century" with its 153-year history, the Marmaray is among the firsts in the world in terms of technological infrastructure, economic size, acceleration of railway transportation and many other innovations.
Having increased the number of passengers gradually in the last six years and joining two continents at five stops for five and a half years, Marmaray started serving 43 stops on the Gebze-Halkalı line with a ceremony attended by President Erdoğan on March 12.
Called the Gebze-Halkalı suburban line after this date, the Marmaray has carried five times the population of the country and 27 times the population of Istanbul in the last six years. The number of passengers carried on this line has reached 402.7 million in six years.
The number of passengers transported on the Marmaray between Oct. 29, 2013 and March 12, 2019 was 318.3 million, while the number in question stood at 84.4 million between March 13 and Oct. 29, 2019.
The average number of passengers carried daily on the Marmaray with the commissioning of the suburban line rose from 162,000 to 365,176 with a 125% increase. The number of passengers transported since the opening of schools, except for Sundays, fluctuates between 420,000 and 470,000.
Meanwhile, Sirkeci, Yenikapı, Üsküdar, Ayrılıkçeşmesi and Söğütlüçeşme take the lead as the busiest stations on the line.
Currently, the Marmaray serves Istanbulites with an average of 120 minutes of travel and 286 daily trains across a distance of 76.6 kilometers between Gebze and Halkalı at 43 stations.
The trains run at eight-minute intervals between Zeytinburnu-Söğütlüçeşme-Zeytinburnu on the first track and 15-minute intervals between Gebze-Halkalı and back on the second track.
Passengers traveling on the first track can make transfers at the Söğütlüçeşme station to go to Gebze, while Zeytinburnu serves as the changing station for passengers wishing to go to Halkalı.
Last Update: Dec 20, 2019 1:19 am
RELATED TOPICS