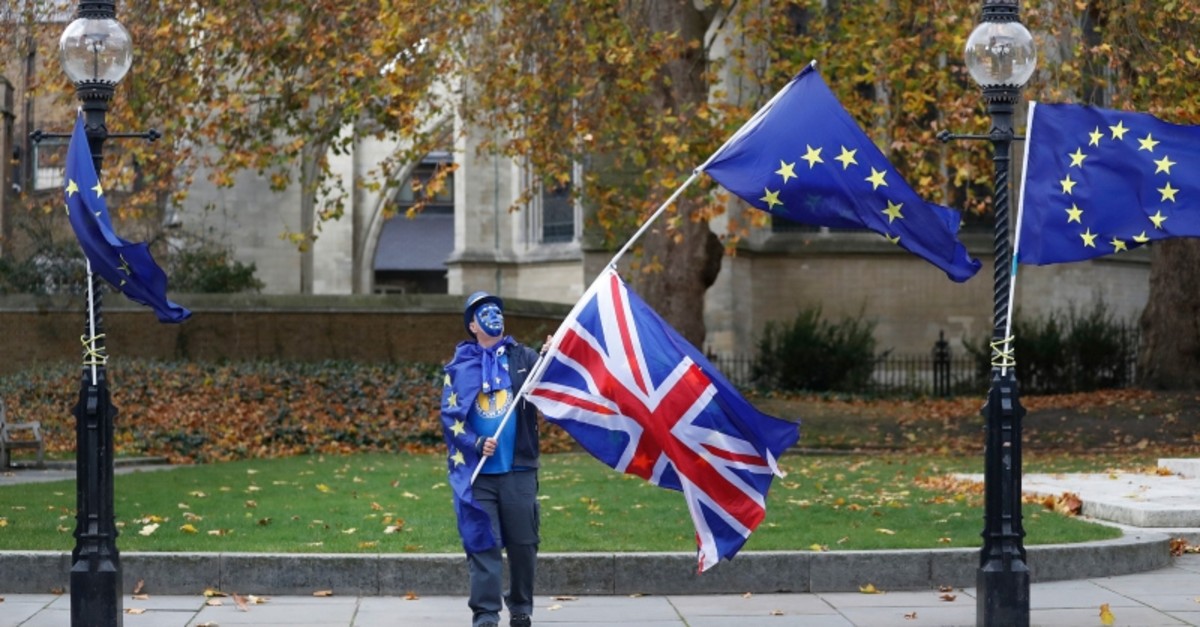 An anti Brexit, pro European Union campaigner waves flags near Parliament in London, Wednesday, Nov. 22, 2017. (AP Photo)
by Associated Press Oct 30, 2019 7:57 pm
A British think tank slammed Prime Minister Boris Johnson's Brexit deal on Wednesday, concluding that the economy would be 3.5% smaller over the next decade compared with staying in the European Union.
The study by the National Institute of Economic and Social Research says the agreement would deliver a 70 billion-pound ($90 billion) blow to the U.K. Researchers said that the outlook is clouded by political and economic uncertainty.
"We would not expect economic activity to be boosted by the approval of the government'
s proposed Brexit deal," the group said.
The researchers based their prediction over the long term on the assumption that the U.K. would leave the bloc with a free trade agreement with the EU after a transition lasting until 2021 while negotiating new deals with other nations. It said that higher "barriers to goods and services, trade and restrictions to migration," would force the economy to slow.
As politicians squabble over how and when Britain will leave the EU, Brexit is reshaping the economy. Initially planned for March, Brexit was pushed back to Halloween and now is not likely to happen before January. Companies are meanwhile shifting investments, creating new supply chains and stockpiling goods to mitigate any damage that would occur from leaving the EU, with or without a deal.
The NIESR estimated that the economy was 2.5 % smaller than it would have been had Britain not voted in 2016 to leave the European Union.
The British government says it plans a different scenario than the one considered by the think tank.
"We are aiming to negotiate a comprehensive free trade agreement with the European Union, which is more ambitious than the standard free trade deal that NIESR has based its findings on," the Treasury department said in a statement.
The research suggested a no-deal Brexit would cause an even greater loss to the economy, with a 5.6% blow to GDP.
Liberal Democrat Brexit spokesman Tom Brake said the figures "come as no surprise."
"The Tories' obsession with Brexit at any cost puts our future prosperity at risk," he said. "It is unconscionable that any government would voluntarily adopt a policy that would slow economic growth for years to come."
Last Update: Dec 20, 2019 1:20 am
RELATED TOPICS