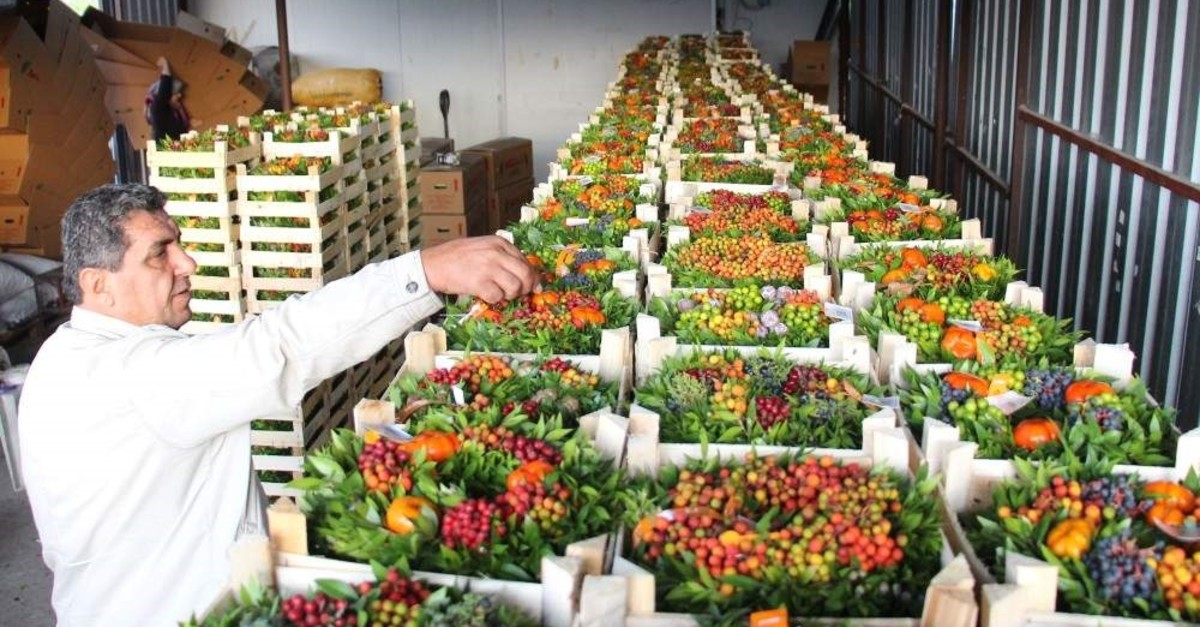 DHA Photo
by Daily Sabah with DHA Oct 31, 2019 4:23 pm
Wreaths produced in the district of Bucak in the southern province of Burdur for Christmas are being exported to almost all European countries, particularly the Netherlands, the United Kingdom, Germany and Denmark.
Christmas wreaths, used by Christians to decorate different areas such as doors, dining tables and cemeteries, make a significant contribution to the employment of women in Kocaaliler Municipality in the district.
Having begun in mid-August, the wreath production season will last until mid-December. Produced and exported since the 2000s, the wreaths are made of completely natural forest waste products such as pine scraps, pine cones, juniper and cypress branches, sandalwood, myrtle fruit, cranberries, wild strawberries, dried peppers and eggplants.
In workshops and at home, locals can make 25-30 wreaths per person daily. Around 300 women make TL 100 to TL 150 on a daily basis. The average unit price of the door decorations is 2.50 euros. While exports started in early October, the decorations are delivered by trucks or aircraft in special refrigerated containers.
By the end of the season, approximately 650,000 door ornaments are made and exported to many countries, including the Netherlands, the U.K., Germany, Spain, Belgium and Denmark. Meanwhile, companies in the region received demand from the U.S. for the first time this year. This year, they sent samples to the Maldives and Seychelles and exported their products for the first time to Japan.
“Exporters leading and maintaining this business provide serious employment to our town,” Kocaaliler Mayor Selahaddin Gökçe said.
Aziz Düz has been producing wreaths for about 20 years in Kocaaliler and exporting them to European countries. “The wreaths, which are used as door decorations in Europe, expand their usage area every year,” he noted. “The wreaths that we mainly export to Germany and the Netherlands are used as door ornaments and table ornaments besides for celebrating Christmas. They are also used for funerals. In short, Europeans use wreaths wherever they want to express joy or sorrow.”
Düz stresses that they produce 2,700 wreaths daily, reaching 250,000-300,000 in annual exports.
Last Update: Dec 20, 2019 1:21 am
RELATED TOPICS