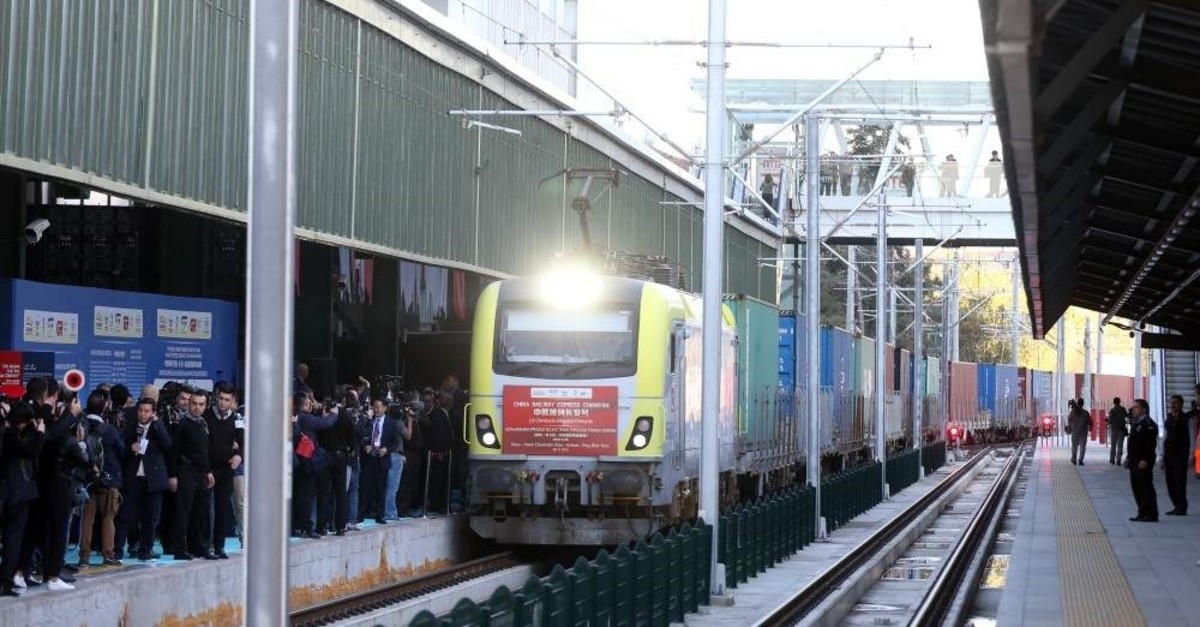 The countries in the Middle Corridor of China's Belt and Road project celebrated a milestone in global trade on Wednesday as they hailed the arrival of a Chinese freight train in Turkey, signaling the full integration of the 'Silk Railway' dream

Turkey and the world witnessed a historic moment on Wednesday as Ankara welcomed and sent off the first train that departed China and for Europe passing below the Bosphorus via Istanbul’s Marmaray tunnel for the first time, marking the realization of the "Silk Railway" dream.

The real Silk Road was an active trade route used between the 2 B.C. and the 18th century that connected China and Europe through Anatolia and the Mediterranean region.

Within the scope of the Belt and Road Initiative (BRI), which aims to connect Asia, Africa and Europe via roads and sea lanes, the railway will reduce freight transportation time between China and Turkey from one month to 12 days thanks to the Baku-Tbilisi-Kars (BTK) railway line, while the whole route between the Far East and Western Europe will take 18 days with the integration of the Marmaray tunnel, said Transportation and Infrastructure Minister Cahit Turhan at the welcoming and sendoff ceremony at the historic Ankara Train Station on Wednesday.

“Considering the $21-trillion trade volume between Asia and Europe, the importance of the issue will be easily understood. The Iron Silk Road line, which benefits a population of nearly 5 billion and 60 countries, has become a new and a very important alternative for the global commercial network,” Turhan stressed.

The minister pointed to the geostrategic and geopolitical importance of Turkey, which connects three continents to each other. Turkey, which is an Asian, European, Balkan, Caucasus, Middle East, Mediterranean and Black Sea country with its geographic location and historical and cultural continuity, holds an important role in the economic and social development of the geographies, Turhan stressed.

The first freight train from China entered Turkey via the eastern province of Kars on Sunday, Nov. 3 after traveled through Kazakhstan, Azerbaijan and Georgia. It then passed through the Turkish towns and cities of Ahılkelek, Kars, Erzurum, Erzincan, Sivas, Kayseri, Kırıkkale, Ankara, Eskişehir, Kocaeli, Istanbul's Marmaray tunnel and Kapıkule in Edirne.

Turhan emphasized that the country established uninterrupted and high-quality transportation infrastructures between continents by establishing a wide variety of transport links as well as corridors in recent years to further strengthen Turkey’s current position.

“With an investment of nearly $754 billion, we have strengthened our transportation and communication infrastructure and completion of the missing links on international transportation routes was among our priorities,” the minister underscored.

On the basis of cooperation between Turkey, Azerbaijan and Georgia within the scope of the Belt and Road Initiative, the Baku-Tbilisi-Kars (BTK) railway line established a freight and passenger link between Europe and China and was launched in October 2017.

Turhan said China Railway Express, which made its first trip via the BTK line has given new direction to the global rail transportation.

With the said line, the minister stressed Turkey has become the most important connecting point of the Middle Corridor stretching from Beijing to London and the Iron Silk Road that extends from Kazakhstan to Turkey.

The minister said that the China Railway Express, carrying a freight of electronic goods equal to the load of 42 trucks, will make 11,483 kilometers in 12 days, starting from Xian in China and passing through two continents and seas and 10 countries with 820-meter-long 42 containers.

Carrying the freight through Baku-Tbilisi-Kars railway and Marmaray saves time and energy compared to other corridors. “This is a historic moment for global and regional trade. This train symbolizes the beginning of a new era in railway transportation,” Turhan remarked.

Kazakhstan National Railway Head Sauat Mynbaev also remarked that the project reinforces the connection between Asia and Europe and stressed that the "One Belt, One Road" project will result in further development of freight transportation.

Azerbaijan’s Deputy Economy Minister Niyazi Seferov also pointed out that the China Railway Express is the first train to cross under the Istanbul strait. “The train will contribute to the friendly dialogue among the countries through which it passes,” Seferov said.

Shaanxi Regional Party Committee Secretary Hu Heping also emphasized that the Chinese freight train contributes to enhancing the economic and commercial dialogue among Eurasian countries. “I believe that the train will expand cooperation among the regional countries,” he remarked.