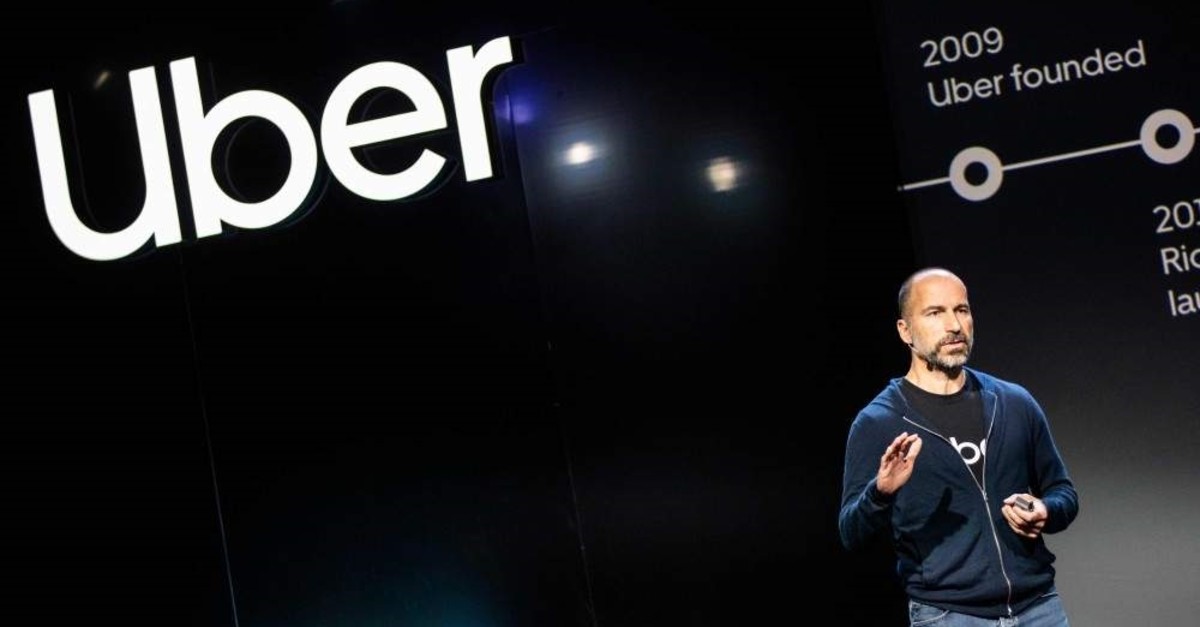 This Sept. 26, 2019, file photo, shows Uber CEO Dara Khosrowshahi addressing the audience during a keynote speech at the start an Uber products launch in San Francisco. (AFP Photo)
by Anadolu Agency Nov 11, 2019 9:33 am
Uber CEO Dara Khosrowshahi backpedaled Sunday after calling the murder of Saudi journalist Jamal Khashoggi a "mistake" made by the Saudi government, the news site Axios said.
Khosrowshahi made the remarks to Axios in an interview on U.S. cable channel HBO, saying: "I think that the (Saudi) government said that they made a mistake."
His remarks on Khashoggi’s murder came after being asked about Yasir Al-Rumayyan, the director of Saudi Arabia's Public Investment Fund, who is a member of the company's board of directors. The sovereign wealth fund is Uber’s fifth-largest investor.
"Listen, it's a serious mistake. We've made mistakes too," said Khosrowshahi and compared the gruesome killing of Khashoggi to the company's fatal driverless car accident in March 2018. A self-driving Uber test vehicle struck and killed a female pedestrian in the accident in Tempe, Arizona.
"We stopped driving, and we're recovering from that mistake. So I think that people make mistakes, and it doesn't mean that they can never be forgiven. I think they've taken it seriously," he said.
Axios said Khosrowshahi later called to express his regret for the remarks to describe the journalist's death and sent a statement.
"I said something in the moment that I do not believe. When it comes to Jamal Khashoggi, his murder was reprehensible and should not be forgotten or excused," said the statement reported by the news website.
A Saudi hit squad killed and dismembered Khashoggi in the Saudi Arabian consulate in Istanbul, Turkey, on Oct. 2, 2018. His body was never recovered. In a report in May, U.N. Special Rapporteur Agnes Callamard concluded it was a "deliberate, premeditated execution” and called for Saudi Crown Prince Mohammad bin Salman to be investigated. Saudi officials described a rogue operation that did not involve the prince.
Last Update: Dec 20, 2019 1:35 am
RELATED TOPICS