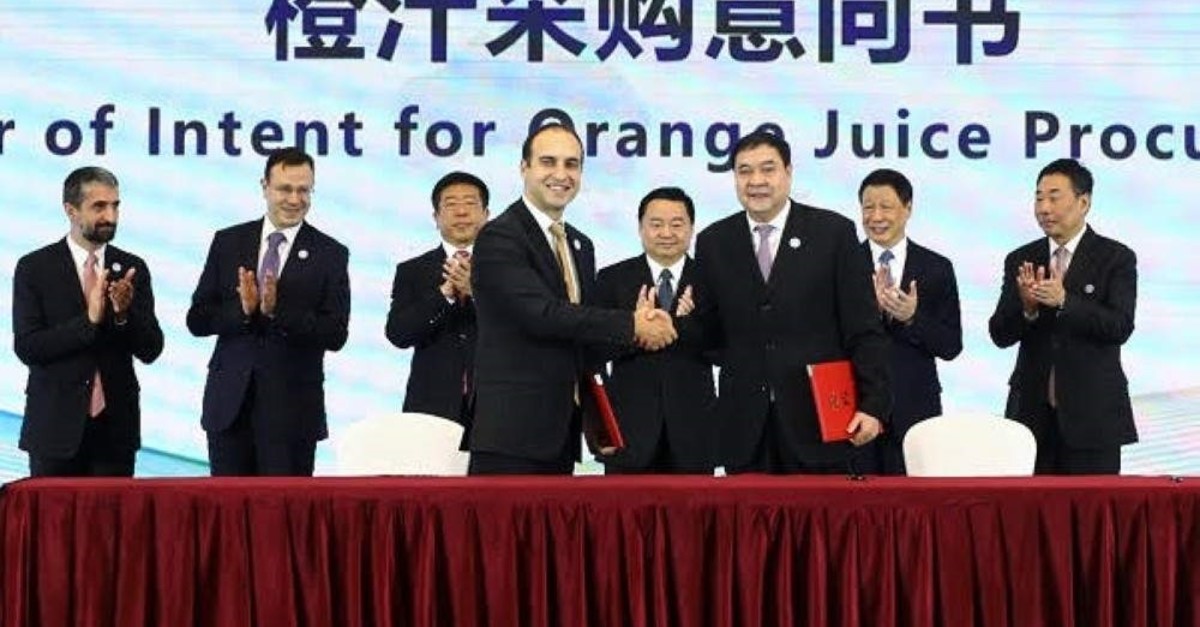 Officials from Turkish fruit juice producer D?MES and China Eastern Airlines signed a 5-year cooperation agreement to offer D?MES' juices in business class, Shanghai, Nov. 11, 2019.
by Daily Sabah Nov 12, 2019 7:13 pm
Turkish fruit juice brand DİMES continues to grow in international markets by expanding its cooperation with the world's leading airlines and taking part in the catering menus of the most prestigious airlines in the world.
DİMES, which has steadily increased its share in the Far East market, has also become the choice of China's strongest growing airline China Eastern Airlines, the Turkish fruit juice producer said Tuesday in a statement. The cooperation between DİMES and China Eastern Airlines is an important step in terms of economic relations between Turkey and China.
Within the scope of the cooperation, China Eastern Airlines, one of the world's top seven airlines with more than 110 million passengers per year, will offer DİMES products in the catering services to First Class and Business Class passengers. According to the five-year cooperation agreement, DİMES products will be available in China Eastern Airlines' online catalog.
DİMES General Manager Ozan Diren signed the cooperation agreement in Shanghai. Chinese Eastern Airlines (CEA) General Manager Li Yang Ming, Deputy General Manager Tian Niu Wen, DİMES Sales Director Selim Can Devrim, Shanghai Consul General Sabri Tunç Angılı, as well as Zhang Hong, General Manager of China Eastern Aviation Import & Export Corporation, attended the signing ceremony.
In a special interview with Chinese state television CCTV, DİMES General Manager Ozan Diren stated that China Eastern Airlines gained worldwide respect thanks to its widespread domestic access as well as its strong international growth, modern aircraft fleet and qualified services. “With our products, we will be part of the flight experience offered by one of the leading brands of world aviation to its guests,” Diren said. “This is exactly what we mean by turning the fruit of the fertile lands of our country and the labor of agricultural producers into value-added products. Our cooperation is a big and important step for DİMES as well as our country's economy.”
Liu Shaoyong, Chairman of the China Eastern Air Holding and Party Leadership Group Secretary, who accompanied Ozan Diren in the CCTV special interview, said they chose Turkey and DİMES, Turkey’s largest and most reliable manufacturer, to offer the best and the best quality to their customers.
Last Update: Dec 20, 2019 1:38 am
RELATED TOPICS