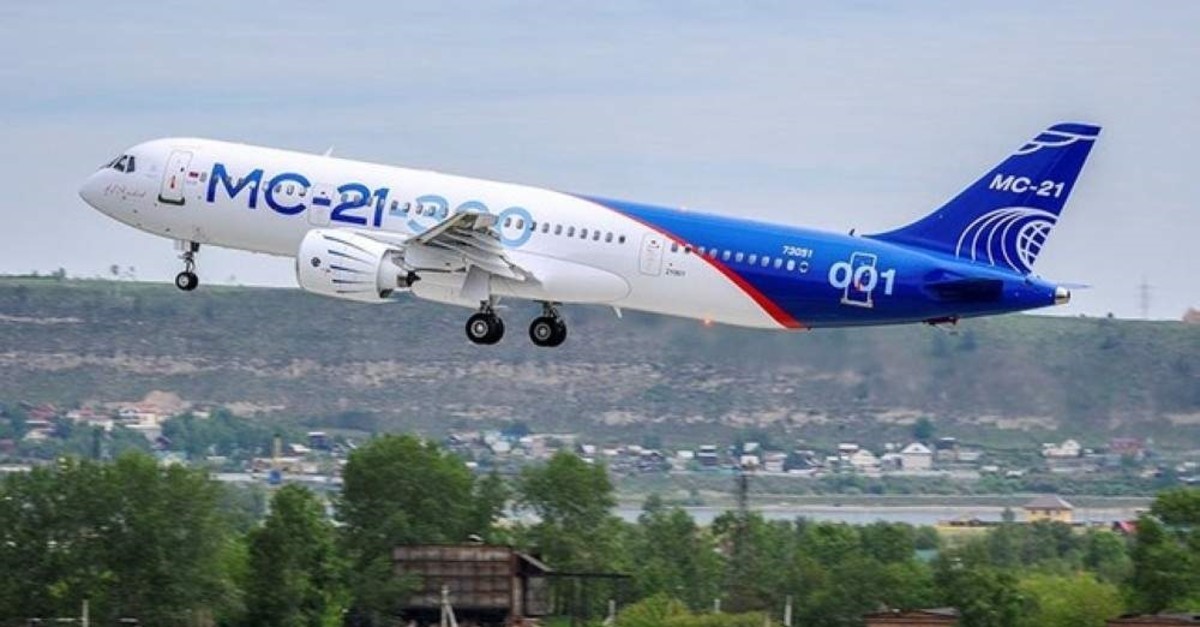 An MS-21 medium-range passenger plane takes off in Irkutsk, Russia, May 28, 2017. (Reuters Photo)
by Daily Sabah Nov 24, 2019 6:51 pm
Russia and Turkey are discussing the delivery of Russian-made passenger aircraft, said Yuriy Slyusar, president of Russia’s United Aircraft Corporation (UAC).
The two countries are discussing issues related to the delivery of the MC-21 passenger plane and the SSJ100, a regional jet designed by Sukhoi Civil Aircraft Company (SCAC), a division of the UAC, Slyusar was cited as telling reporters yesterday.
“Yes, we are discussing both the MS-21 and the Superjet (Sukhoi Superjet-100),” Slyusar said when asked the related question.
Manufactured by Irkut Corporation, the medium-haul MC-21 passenger plane made its debut abroad by flying to Istanbul to attend Teknofest, Turkey’s largest technology and aerospace event, in September.
The aircraft, with the widest body in its class, has a 211 passenger capacity and 6,000 kilometers flight range and is 42.20 meters in length with a 35.90 meter wingspan.
The SSJ100 is a 100 seat regional jet that in 2008 successfully accomplished its first flight.
In the meantime, Ankara and Moscow were previously also said to have been discussing Su-35 fighter jets as well as co-manufacturing some components of the Russian-made jets.
At a visit to International Aviation and Space Salon (MAKS) on Aug. 27, President Recep Tayyip Erdoğan was shown the newest generation of Russian stealth aircraft, the Su-57 fighter jet, Su-35 fighter jets, the Ka-52 military helicopter and Mi-38 transport helicopter.
Soon after Erdoğan's visit, Sergei Chemezov, the head of Russia's state-owned manufacturer Rostec, said they would be willing to sell Russia's top air superiority warplane to Turkey if Ankara "expresses the desire."