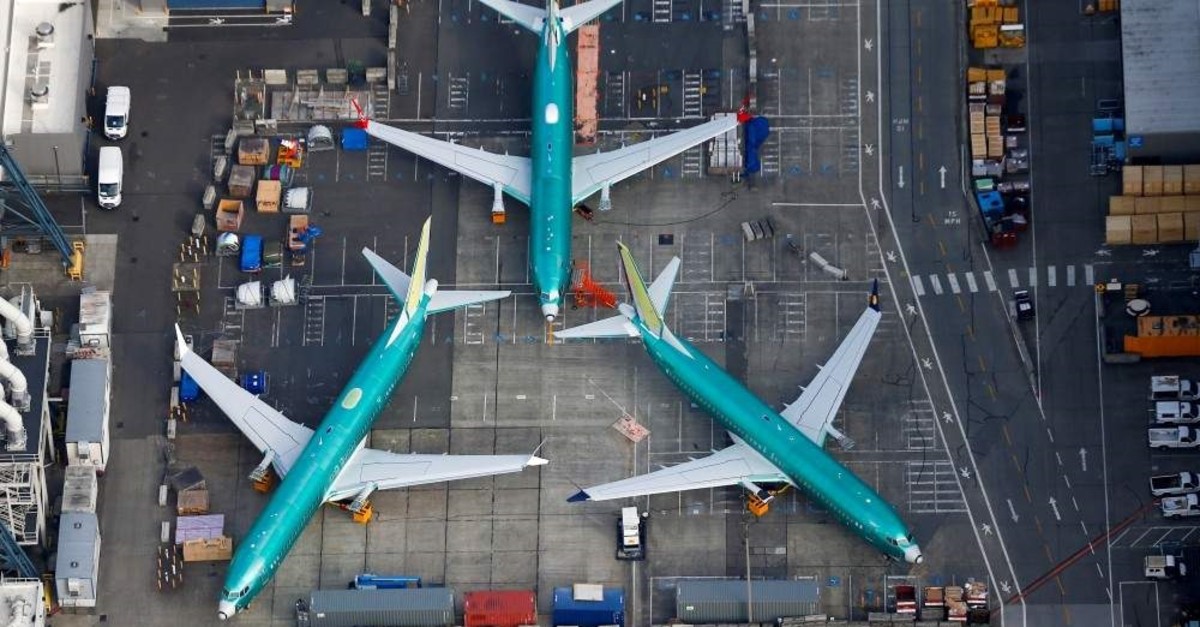 An aerial photo shows Boeing 737 Max airplanes parked on the tarmac at the Boeing Factory in Renton, Washington, U.S., March 21, 2019. (Reuters Photo)
by Dec 25, 2019 6:11 pm
Boeing Co. documents under review by a U.S. congressional panel appear to point to a "very disturbing" picture of commentary from the planemaker's employees over the grounded 737 Max aircraft, a congressional aide said Tuesday.

The documents were submitted to the House of Representatives transportation infrastructure committee and the Federal Aviation Administration on Monday, the same day Boeing announced the firing of chief executive Dennis Muilenburg amid a crisis over the handling of the aftermath of two fatal crashes.

The best-selling 737 Max has been grounded since March. The crashes in Indonesia and Ethiopia within five months killed 346 people.

"Similar to other records previously disclosed by Boeing, the records appear to point to a very disturbing picture of both concerns expressed by Boeing employees about the company's commitment to safety and efforts by some employees" to make sure Boeing's production plans were not disrupted, said the aide, who spoke on condition of anonymity.

Boeing said in a statement that it "proactively brought these communications to the FAA and Congress as part of our commitment to transparency with our regulators and the oversight committees."

The tone and content do "not reflect the company we are and need to be," Boeing said. "We have made significant changes as a company in the past nine months to enhance our safety processes, organizations, and culture."

The company said Monday that Boeing board chairman David Calhoun, 62, a former General Electric executive who has been on the board since 2009, would take over from Muilenburg as CEO and president from Jan. 13.

The latest batch of documents submitted to the FAA contained instant messages from a former Boeing senior pilot, Mark Forkner, according to a person briefed on the matter.

In October, Boeing turned over 2016 messages to the FAA between Forkner and another pilot that said he might have unintentionally misled the U.S. regulator and raised questions about the performance of a key safety system during testing.

Boeing had earlier turned over the documents to the U.S. Justice Department, which has an active criminal investigation underway into matters related to the 737 Max plane.

Boeing is struggling to mend relations with U.S. and international regulators it needs to win over to get the jet back in the air.