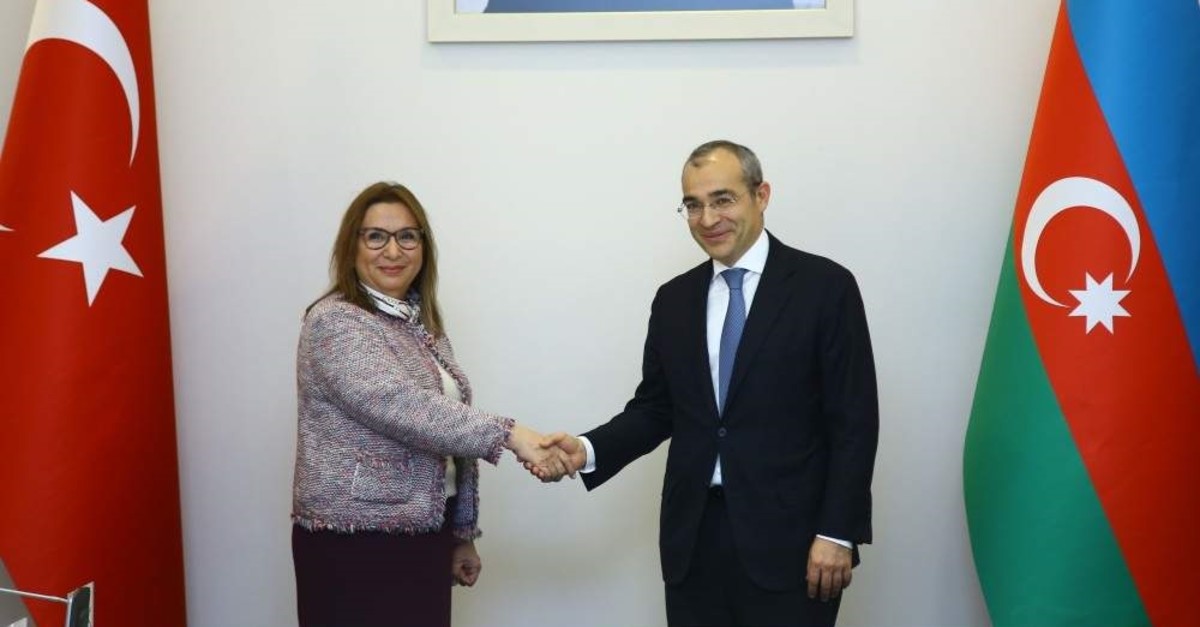 "The deal will be signed during the Strategic Cooperation Council meeting in the presence of both presidents," Pekcan said during her visit to Baku to meet her Azerbaijani counterpart.

Underlining that they attach utmost importance to relations with Azerbaijan and that she met with President İlham Aliyev as part of the talks, Pekcan said: "Aliyev gave the good news that Azerbaijani investments in Turkey will be increased."

Pekcan stated that the committees will start working as of today to eliminate any obstacles for Turkish businesspeople's investment and trade in Azerbaijan, continuing: "In a time when trade wars prevail in the world, we must take steps to bring out our own potential. We have to turn this into an opportunity. There may be instability in the region. However, considering that this is temporary, we have to aim at how to turn this period into an opportunity. I know that this period is a very good opportunity for the development of cooperation opportunities with Azerbaijan."

Highlighting that the presidents give full support to increasing trade between the two countries, Pekcan said that the Preferential Trade Agreement is ready to be signed. "I hope it will be signed in the presence of our presidents at the Strategic Cooperation Council Meeting. Then we will expand its scope to further clear the way for the businesspeople of the two countries."

The trade minister emphasized that they also intensively discussed the issues of transportation and customs with Azerbaijan, noting that they would mutually work on the liberalization of transportation and the more efficient use of the Baku-Tbilisi-Kars line. Linking Turkey, Azerbaijan and Georgia, the 826-kilometer (513-mile) BTK railway project started operations in October 2017.

Pekcan also remarked that they attach importance to the trade with Nakhchivan and said they would bring some special commercial advantages there.

Azerbaijani Economy Minister Mikayil Jabbarov said that they are far from the target of $15 billion trade volume for the time being, but they will surely achieve this goal.

Indicating that they will hold a meeting with Azeri and Turkish businessmen to promote investment opportunities in Azerbaijan in February 2020, Jabbarov noted: "The Azeri economy is open for the Turkish economy and investments. We are deepening economic reforms. We are ready to help Turkish businesspeople."

DEİK Chairman Olpak said that they are aware of their duty as the business world to increase trade volume.

Olpak pointed out that there are important opportunities in the agriculture, defense and pharmaceutical sectors and important targets in the privatization process in Azerbaijan, emphasizing that Turkish businesspeople should also be involved in this process.

Investments in Turkey to hit $20B

Pekcan was later accepted by President Aliyev who drew attention to the continuous Azerbaijani investments in Turkey during their meeting.

"Up until now, Azerbaijan has invested more than $17 billion in the Turkish economy and Turkey has invested over $12 billion in Azerbaijan. SOCAR (State Oil Company of Azerbaijan Republic) has new investment projects. This economic cooperation is a strong indicator of the filial relations between the two countries," Aliyev said.

For her part, Pekcan stressed that the preferential trade agreement will be expanded to include new-generation free trade agreements and services. "SOCAR's investments in Turkey are of high value and we will continue supporting the company. We are planning to organize a meeting on the Azerbaijan's investment environment in February," she said.

SOCAR plans another petrochemical facility investment in İzmir in partnership with BP with an estimated cost of $1.8 billion.