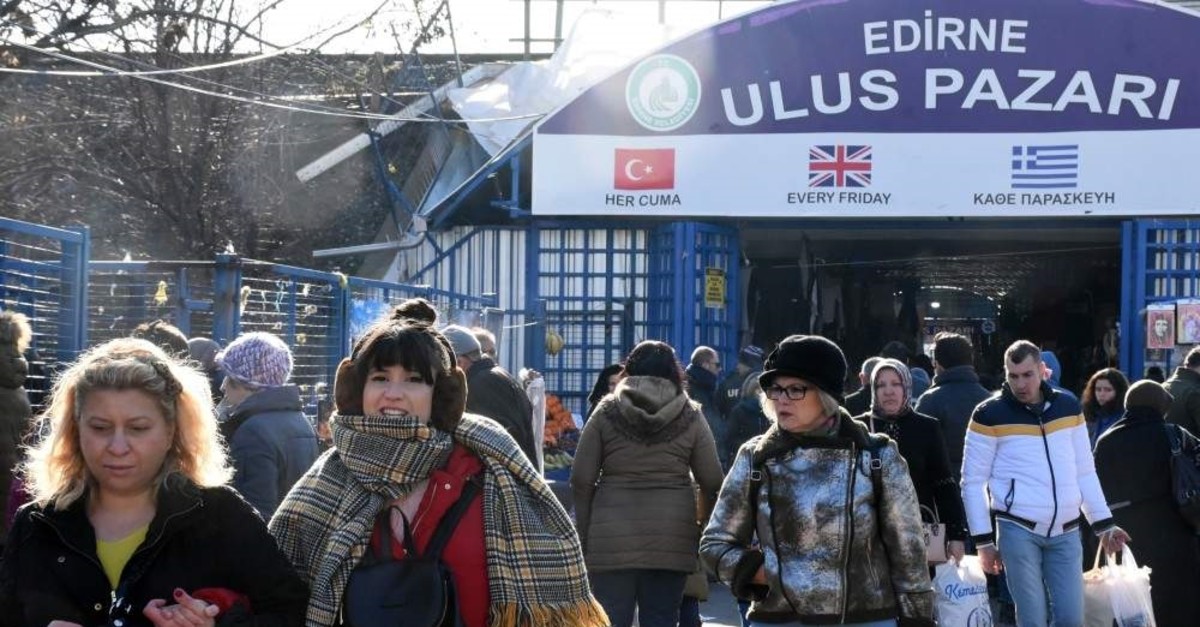 The Turkish border city of Edirne enjoys growing popularity among Greek and Bulgarian tourists, who usually arrive in the town on the weekends, spending an average of 100 euros – a noteworthy contribution to the national economy

The city of Edirne in northwestern Turkey has become a favorite hotspot for visitors from across its two neighboring borders, welcoming around 2.74 million Greek and Bulgarian tourists in 2019 alone, according to the head of the local chamber of commerce and industry.

Greeks and Bulgarians heading over the border to benefit from Turkey's competitive prices and high-quality goods, as well as local visitors from surrounding cities, generate a buzz throughout the city, particularly on weekends.

One of the major reasons behind this wave of visitors is the volatility in exchange rates that led to the Turkish lira's sharp decline, making Turkish products much more affordable for tourists.

Edirne Chamber of Commerce and Industry Chairman Recep Zıpkınkurt praised how well 2019 went for the city, not least as a result of the 270 million euros he claims was spent by Bulgarians and Greeks taking shopping trips to the city in 2019, generating a serious inflow of foreign exchange.

"Greek and Bulgarian tourists spend around 100 euros on average, according to surveys conducted on how much they spent during their visit to the city. Accordingly, a contribution of some 270 million euros was made to the national economy. This is good news," Zıpkınkurt told Demirören News Agency (DHA) on Sunday.

"2019 was a bright year for Edirne," Zıpkınkurt continued. "There was a significant surge in the number of Greek and Bulgarian tourists. Our tradesmen are pleased, as well as tourism companies. With this in mind, we aim to host 5 million Greek and Bulgarian tourists over the course of 2020 ... We look to increase the number of local and foreign tourists to 10 million by 2023."

According to data compiled from the Kapıkule, İpsala, Hamzabeyli and Pazarkule border gates, some 2.17 million Bulgarian and 570,382 Greek tourists arrived in the city in 2019.

On weekends, busy crowds can be spotted on Edirne's pedestrianized Saraçlar Street, while most shoppers flock to the weekly Ulus Bazaar, a covered marketplace offering a wide range of goods.

Greek and Bulgarian tourists typically arrive a day ahead of their shopping trip, entering from the Pazarkule or Kapıkule border gates respectively and usually spend a night in a hotel. They come to Edirne individually or on a package tour.

Asked about their shopping preferences, Zıpkınkurt said the visitors purchased everything from textiles and ready-to-wear items to various foodstuffs and cosmetics.

The uptick in traffic has prompted many new stores to open with new brands opening shop in Edirne, added Zıpkınkurt. He also noted that with the cooperation with local authorities, tradesmen in the city were currently being provided with free Greek and Bulgarian language courses that will continue over the year.

Tradesmen in the city have already begun to translate their websites into Bulgarian so that potential customers can browse their prices before making the trip. In order to further their reach, many companies have also been sharing ad campaigns and promotions with Bulgarian and Greek customers via social media.

A local clothing tradesman in Edirne, Mehmet Can, said he was pleased with sales. Stating that most of his customers were Bulgarian, Can added: "Bulgarian tourists come early in the morning to do their shopping. We sell wholesale due to differences in the exchange rate and we are happy with our sales."

Hasan Ahmetov, who lives in Bulgaria's predominantly-Turkish province of Kardzhali and arrived in the local marketplace in Edirne with his family for shopping, pointed out the competitive prices of goods.

"Everything is at half price in Edirne. We meet all of our needs with a shopping trip here. In addition to being cheap, Turkish goods are also of higher quality. We come to Edirne every weekend and do our shopping for everything, from textiles to food," Ahmetov told DHA.

Another ethnic Turk who lives in Bulgaria, Osman Mustafa, explained that he was in Edirne shopping for chocolates to gift his soon-to-be fiancée. "We're getting engaged next week. We came to Edirne to do some engagement shopping. We have bought our engagement chocolates, clothes and also got some things we need for the house. The prices are pretty decent," Mustafa said.