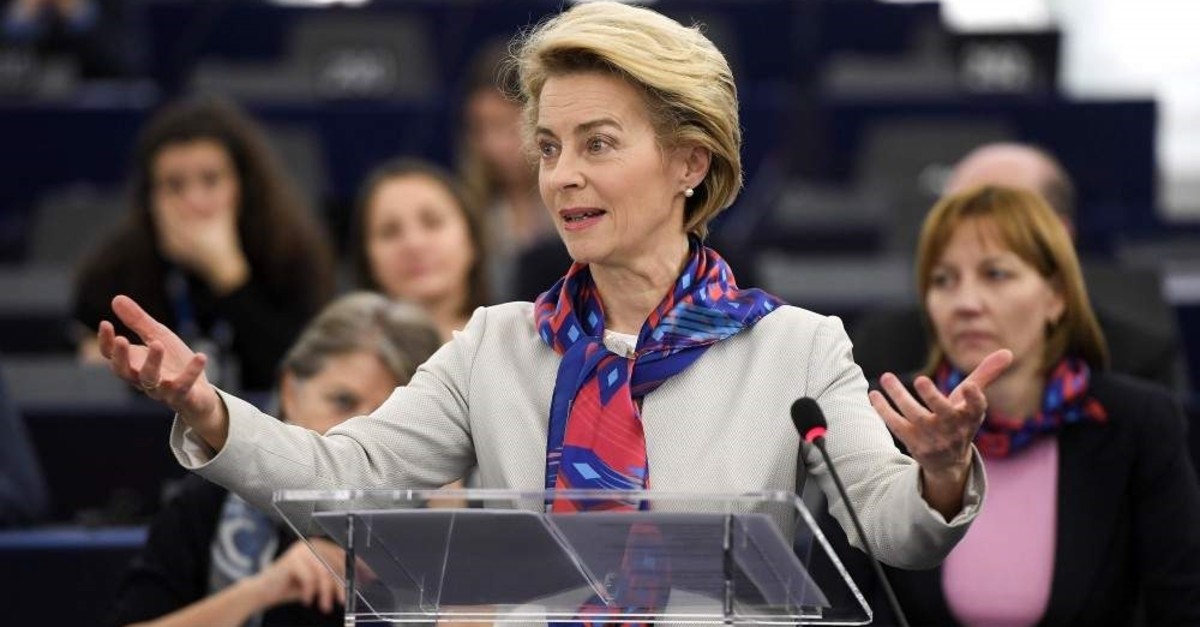 President of the European Commission Ursula von der Leyen gives a speech during the presentation of the priorities of the rotating Presidency of the Council for the next six months at the European Parliament on Jan. 14, 2020 in Strasbourg. (AFP Photo)
by Associated Press Jan 14, 2020 10:03 pm

The European Union plans to dedicate a quarter of its budget to tackling climate change and to help shift 1 trillion euros ($1.1 trillion) in investment towards making the economy more environmentally friendly over the next 10 years.

The Europe Investment Plan unveiled Tuesday will be funded by the EU budget and the private sector. It aims to deliver on European Commission president Ursula von der Leyen's Green Deal to make the bloc the world's first carbon-neutral continent by 2050.

The plan includes a mechanism designed to help the regions that would be most disrupted economically by the transition to cleaner industries. It does not depend on any further approval from EU countries.

Von der Leyen, who took office in December, has made the fight against climate change the priority of her mandate.

The money is designed to convince coal-dependent countries like Poland to embrace the Green Deal by helping them weather the financial and social costs of moving away from fossil fuels.

The plan would allocate the money according to specific criteria. For example, regions where a large number of people work in coal, peat mining or shale oil and gas would get priority.

EU leaders agreed last month to make the bloc's economy carbon neutral by the middle of the century, but Poland, which depends on coal for much of its energy needs, did not immediately agree to the timeline.

"We want to allow the coal regions to embrace without hesitation the European Green Deal," said a senior commission official, who was not authorized to speak publicly as a matter of practice.

"The workers losing their jobs should be helped for re-skilling. There will be support for new infrastructure, job-seeking assistance, investment in new productive activities. And the regions where existing activities will cease will also need to be regenerated," he added.

The commission says the plan will also be supported by money from EU regional programs, from the InvestEU program, which mobilizes public and private investment using an EU budget guarantee, and the European Investment Bank.

According to the commission's estimates, meeting the 2030 climate goals – which includes reducing greenhouse gas emissions by 40% from 1990 levels – will cost an additional 260 million euros per year.

In order to qualify for financial support, member states will need to present plans to restructure their economy detailing low-emission projects. The plans will need the commission's approval.

Projects including nuclear power won't be eligible for funding, except for those related to Euratom's program for nuclear research and training.

European lawmakers are expected to hold a non-binding vote on a Green Deal resolution Wednesday and von der Leyen wants to have a climate law adopted by March.