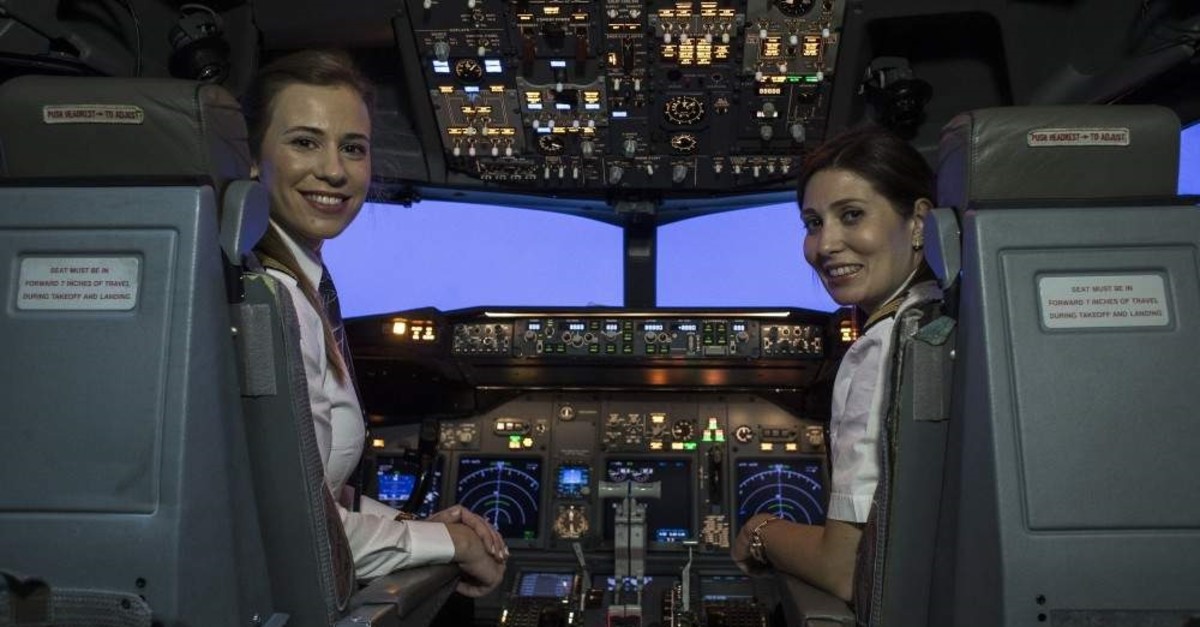 National flag carrier Turkish Airlines (THY) broke an all-time record in terms of the number of female pilots, with a thirty-five fold increase from just six in 2006 to 211 this year.

Female pilots are flying every type of aircraft, at the helm of both short and long haul flights. THY has become one of the airlines with the most female pilots in the world, employing 39 captains and 172 first officers, including those currently receiving training. The pilots are sourced from Turkey and around the world.

After flight training, which was previously available only in the Turkish Air Force, was made available for civilians, female pilots began to enter the world of Turkish civil aviation.

Sevimli decided to become a pilot when she saw a female captain in the cockpit when she was a high schooler and went on to study at Anadolu University before embarking on a career with Turkish Airlines which has spanned eight years.

"In my high school years, it truly affected me when I was studying my environment and doing research about professions. Later, I learned that Anadolu University had a piloting department," THY's 29-year-old Boeing 737 captain said. "THY is a very important company and a flag carrier. I am proud of carrying our flag to all parts of the world and flying in Turkish Airlines."

The THY captain, whose husband is also a pilot, stressed that despite the recent rise in female pilots, some passengers could still be surprised. "Sometimes, when they hear us making the announcement, some passengers convey their surprise and happiness to our cabin crew, which, of course, makes us very happy," she said. "Passengers who we come across after the flight are always a source of motivation when they express their happiness and emotions."

Sevimli explained that any passenger could become a pilot as long as they met the minimum requirements. "It is, of course, a pleasure for us to always give detailed information to young people who think that the profession will suit them. I would very much like our numbers to keep increasing. I think every job is difficult. I also recommend piloting to our women because I am happy with what I do," she noted.

Didem Bayrakdar, 32, who graduated from Yeditepe University's Department of Electrical and Electronic Engineering and completed her masters abroad, has been flying as a first officer for two years in Turkish Airlines. After her education in a private flight school, Bayrakdar, whose father was also a pilot, worked in the private sector for six and a half years and then crossed paths with THY.

"I wanted to be a pilot and, with the support of my family, I completed my pilot training in a private flight school. Currently, I work as a first officer in THY's Boeing 737 fleet," she said. "I am incredibly happy and proud to be flying with THY, one of the largest airlines in both Turkey and the world. I see passengers smiling when they see me coming from the boarding bridge or stairs. I see the kids waving, and these are the moments that make me incredibly happy."

"I recommend anyone who wants to be a pilot to go for it because I love what I do," Bayrakdar continued. "I do not believe in the differentiation between women and men in this profession. Everyone sitting in this seat undergoes certain training, achieves certain success and needs to reach a certain standard. All of our pilots do this job well, man or woman. We have not seen any discrimination from our male pilots, and we get support from them."

İrem Poyraz, 28, a graduate of Koç University Department of Electrical and Electronics Engineering, has been flying as a first officer for two years in Turkish Airlines. Poyraz, whose father was also a pilot, said she grew up in planes. "This was my childhood, so I thought it was the best job for me in the future," Poyraz said. "We fly to many destinations, which makes me proud because we are the flag carrier, and THY is known all over the world. We enjoy it since we represent it in the best way. I recommend everyone to be a pilot. Our male colleagues say we are certainly more meticulous, and we get a lot of support from them and especially our captains."