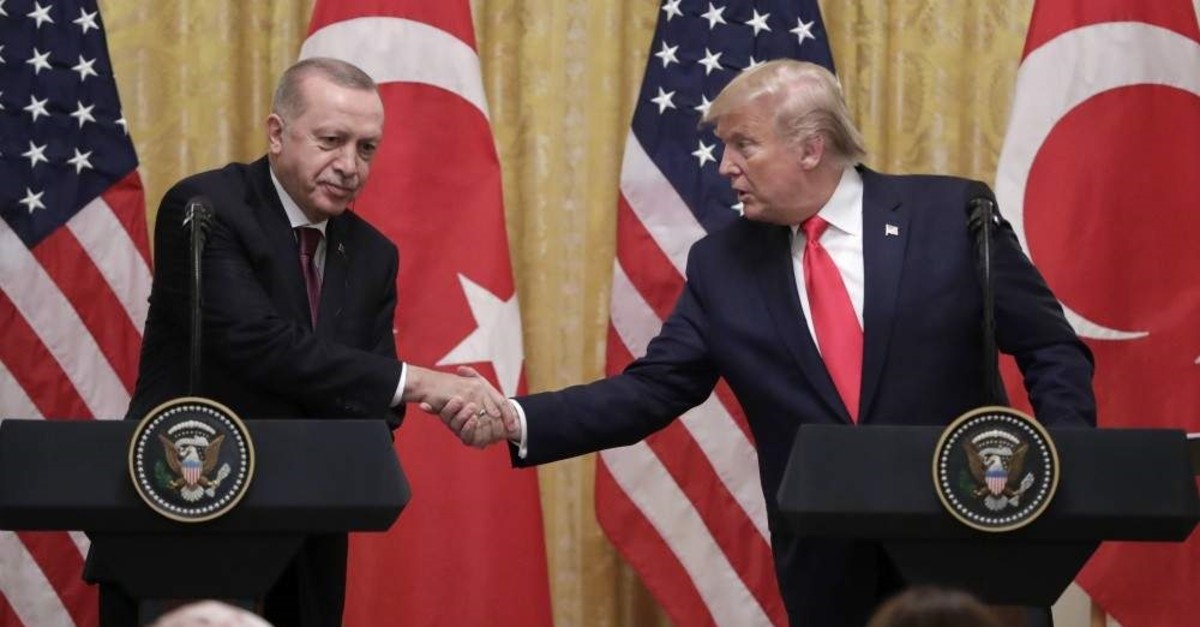 Ankara and Washington have managed to deal with their bilateral trade ties separately, enabling their trade volume to remain stable over the three years of U.S. President Donald Trump's time in office

As President Donald Trump's third year in office comes to an end, a look back on Turkey-U.S. trade relations has shown that bilateral ties remain strong with an annual trade volume of over $20 billion despite numerous political and economic crises that have gone on between Washington and Ankara.

Since Trump's inauguration in January 2017, Turkey-U.S. relations have been tested many times over a range of issues including Turkey's purchase of the Russian S-400 surface-to-air missile system, economic sanctions, Washington's support for the YPG terror group, inaction against the Gülenist Terror Group (FETÖ) and anti-Turkish legislation put forth by the Senate.

While there is still a long way to go toward achieving the mutual target of $100 billion trade volume – a goal set and reiterated by President Recep Tayyip Erdoğan and U.S. President Trump – the current trade volume remaining stable during the first three years of the tumultuous Trump administration has proven the durability of trade ties between the two countries, sector representatives say.

According to the Turkish Statistical Institute's (TurkStat) figures, the trade volume between the two countries decreased by %7 in January-November period in 2019, reaching $17.7 billion. The same figure was $20.7 billion in 2018.

The Ministry of Trade's temporary data showed that the U.S.-Turkey trade volume exceeded $20 billion in 2019 with Turkey sending $8.9 billion worth exports to the U.S, with imports amounting to $10.9 billion.

The U.S. says that the Russian weapons system is not compatible with NATO defenses and that incorporating the system into Turkish infrastructure poses a threat to its F-35 stealth fighter jets. Turkey, however, emphasized that the S-400s would not be integrated into NATO systems and would pose no threat to the alliance, rejecting calls to back out of the deal. Ankara also stressed it was the U.S.' refusal to sell it Patriots that led it to seek out other sellers, adding that Russia had offered it a better deal, including technology transfers.

The tensions worsened after U.S. Senate in December voted in favor of a sanctions bill in response to Turkey's S-400 purchase and Operation Peace Spring in Syria.

The acquisition of the Russian weapons system prompted the Trump administration in July to remove Turkey from the F-35 fifth-generation joint strike fighter program, in which Ankara was a major buyer and parts manufacturer. Tensions deepened soon after Turkey received its first shipment of the Russian equipment.

The Trump administration has held off on levying sanctions, despite Trump having signed a sweeping sanctions law – namely CAATSA, in 2017, mandating sanctions for countries who do business with the Russian military.

Underlining that the trade volume surpassed the $20 billion mark only after Trump's presidency despite these tensions, Yalçındağ said, "I believe that Trump and Erdoğan's leadership has created wider space for cooperation between Turkish and American businesses."

Yalçındağ said that political challenges continue to cause concern for businesses operating or doing trade in the U.S. but noted that bilateral trade did not experience any regression as a result of political tensions.

Yalçındağ said they have taken some new steps after commissioning a recent report by the consulting firm, Boston Consulting Group (BCG) on how to reach Turkey's $100 billion bilateral trade volume target.

He said that the TAİK has decided to focus on certain sectors and set up sector-oriented committees, which will meet with US retail companies to boost imports.

TAİK is planning to bring Turkish and American sector leaders as well as senior government officials at its annual conference in Washington between April 14-16.

Jennifer Miel, executive director of the U.S.-Turkey Business Council, said Turkey and U.S. have proven that their trade ties remain diverse, dynamic, and durable during the Trump presidency.

Miel noted that Turkish and American private sectors remain close to each other due to factors such as NATO alliance, common interests, and shared entrepreneurial spirit and that's why bilateral trade relations continue to thrive.

She added that reaching a target of $100 billion in volume of bilateral trade required both countries to make certain reforms. "Reducing customs tariffs, improving access to the markets, and facilitating digital trade will increase both parties' exports."

Miel also noted that the annual conference between Turkey and U.S. business councils will focus sectors that carry strategic importance such as on aviation, digital economy, energy, construction, and tourism.