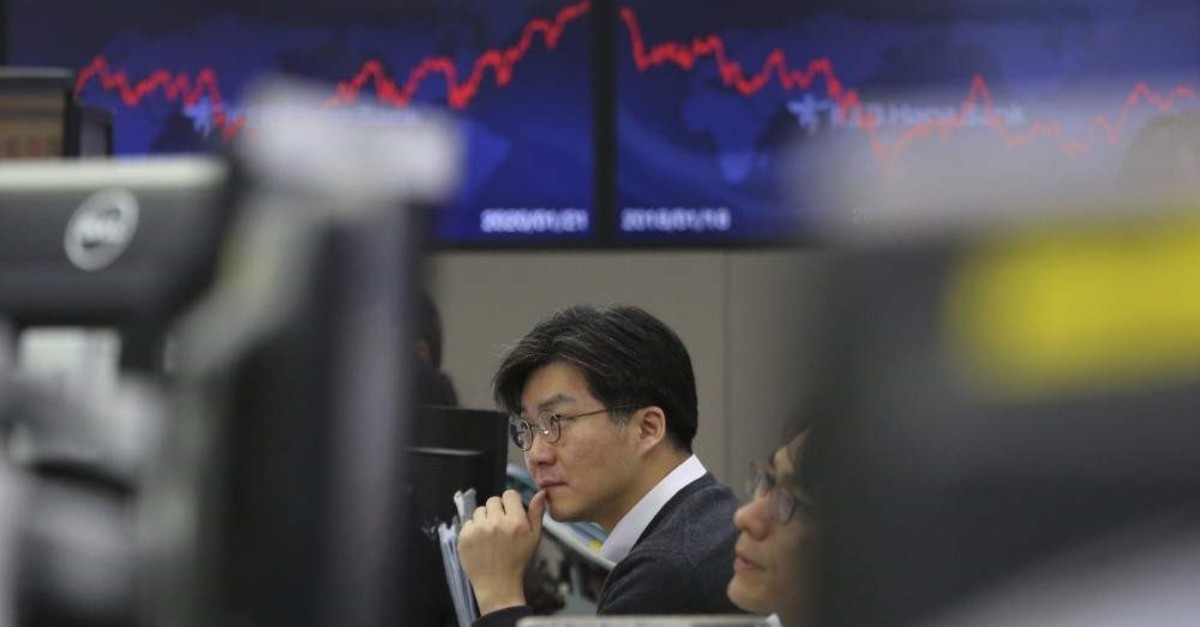 World shares tumbled on Monday as worries grew about the economic impact of China's spreading coronavirus with demand spiking for safe-haven assets such as Japanese yen and treasury notes.

Most of the other regional markets were closed for a public holiday, including Hong Kong, Shanghai, Taiwan, South Korea and Singapore markets. MSCI's broadest index of Asia-Pacific shares outside Japan was off 0.4%, as the trade in the region has already slowed due to closed markets.

The ability of the new deadly virus to spread is getting stronger and infections could continue to rise, China's National Health Commission said Sunday, with nearly 3,000 people globally infected and 81 in China killed by the disease so far.

China has already locked down the epicenter of the disease, Wuhan – a city of 11 million people – while imposing tight travel restrictions on a number of other cities, including Beijing.

The country than announced it will extend the week-long Lunar New Year holiday in a bid to curb the spreading disease by three days to Feb. 2, and schools will return from their break later than usual.

The move comes during the holiday, which normally sees a high demand for travel both throughout the country and overseas, as hundreds of millions of people crisscross the country and spend billions of dollars. The outbreak has also led to the cancellation of festivities, along with temporary closures of Beijing's Forbidden City, Shanghai's Disneyland and a section of the Great Wall.
The decision has already been visible on global tourism which seems to be taking a heavy hit. Thailand, one of the favorite destinations of the season, the number of Chinese tourists appeared to be much smaller than usual and officials estimate potential lost revenue at 50 billion baht ($1.6 billion).Tourism from China to the U.S. was already on a decline even before the coronavirus hit, hurt by the prolonged trade dispute between Beijing and Washington. The National Travel and Tourism Office, which collects data from U.S. Customs forms was predicting a return to slow but steady growth in 2020 and beyond after a decline in 2019, however it isn't clear how the outbreak and latest travel restrictions might change that.
China Outbound Tourism Research Institute previously predicted 7 million outbound trips for Chinese New Year this year, up from 6.3 million in 2019, a few months before the deadly virus outbreak.

Meanwhile, market participants continue to keep a wary eye on developments around the virus, which the World Health Organization (WHO) last week deemed "an emergency in China," but not, as yet, for the rest of the world.

Stephen Innes at AxiCorp warned the economic shock to China and the world – just as a growth slowdown appeared to be easing – could be massive.

"The biggest threat to the global economy is not just because the disease spreads quickly across countries through networks related to global travel," he said in a note. "But also because any economic shock to China's colossal industrial and consumption engines will spread rapidly to other countries through the increased trade and financial linkages associated with globalization," he told Agence France-Presse (AFP).

The similar outbreaks in China caused sharp losses for stocks as Hong Kong stocks lost about 10% in March and April 2003 when the East Asian country faced a different kind of coronavirus, namely the Severe Acute Respiratory Syndrome (SARS), which killed nearly 650 people across mainland China and Hong Kong in 2002-2003.

The outbreak of the new virus in China has sent shivers through world financial markets, with investors drawing comparisons to the 2003 SARS outbreak in order to assess its potential economic impact.

A 2004 analysis claimed that the SARS crisis cost the world economy around $40 billion. A May 2006 economic briefing by the International Air Transport Association (IATA) estimated that world gross domestic product suffered a 0.1% hit due to the outbreak.

U.S. Treasury prices advanced, pushing down yields further, with the benchmark 10-year notes dropping to a three-and-a-half-month trough of 1.627% in early Asian trade.

The uncertainty in the upcoming economic impact of China’s new SARS-like virus also pressured oil and other commodity prices, except safe-haven gold.

Having dropped more than 6% last week, crude prices plunged more than 3% Monday, and the price per barrel of crude oil was recorded as $58.63, raising further concern on the virus’s impact.

"Investors will react quickly to any sign of negativity, and this is no exception as China announces that the issue has become an emergency. This could keep oil prices fragile until the coronavirus shows signs of slowing down," Mihir Kapadia, chief executive at Sun Global Investments, told Reuters.