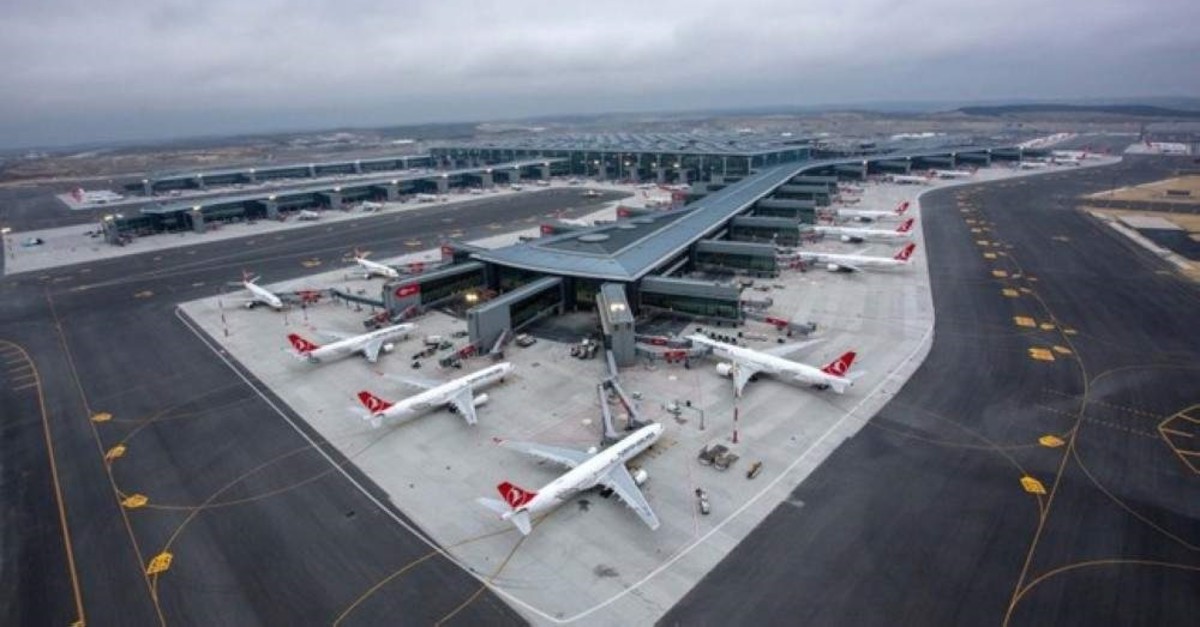 Having displayed its potential in its first year, Istanbul’s new state-of-the-art airport was listed among the top two most developing airports worldwide enjoying the highest rate of increase in the number of passengers in December, the International Civil Aviation Organization’s (ICAO) December data showed. Turkish Airlines (THY) was also named the carrier that increased the number of its passengers most among its European peers.

Already seen as the new center of aviation rising from the outskirts of Turkey's most populous city and perched firmly on the shores of the Black Sea, the airport was officially opened in a grand ceremony on Oct. 29, 2018. However, its first phase became fully operational on April 7, 2019, as it took over air traffic from the now-closed Atatürk Airport – which was one of the busiest airports in Europe. The airport has transitioned to other uses such as training activities, aviation fairs and civil use, while some parts are to be transformed into a public park.

A megaproject by the ruling Justice and Development Party (AK Party), the airport was initially launched over a need for meeting the ever-growing demand from around the world, relieving air traffic with a strong infrastructure and large capacity.

It was built with a cost of 6 billion euros with a public-private partnership (PPP) model by a consortium of Turkey's leading contractors Limak, Kolin, Cengiz, Mapa and Kalyon.

Before its establishment, there were two airports in one of the world's most crowded cities, Sabiha Gökçen Airport on Istanbul's Anatolian side and Atatürk Airport on the European side. Atatürk Airport served some 68 million passengers in 2018, its last year, while Sabiha Gökçen has a current capacity to welcome some 31 million passengers per year.

The new airport can handle 90 million passengers a year in the current phase of development, which, while a high figure, is nothing compared to its potential capacity to serve 200 million after the completion of all phases and the construction of six runways, scheduled to be completed by 2028. It will be home to more than 100 airlines flying to over 300 destinations around the world.
From April to the end of the year, Istanbul Airport served 52.2 million passengers. A total of 327,799 planes took off and landed at the airport in the said period.

THY ranks first among European carriers
Meanwhile, Turkish Airlines ranked fourth in the world and first in Europe among the carriers seeing the highest increase in the number of passengers they flew in the last month of 2019, according to ICAO data. It came just after Qatar, Singapore and China airlines in the global ranking.
It saw a 7.1% year-on-year growth in the figures in December while Qatar Airlines increased the numbers some 17.7% and Singapore and China’s flag carriers increased 8.7% and 7.9%, respectively.
In Europe, THY was followed by Germany’s Lufthansa, Air France-KLM, Raynair and British Airways have increased some 2.8%, 1.6%, 5% and 4.8% respectively.

It was named the 14th company that carried the most number of passengers worldwide in December, the data showed.
Elaborating on the data, THY Board Chairman İlker Aycı said that despite several unfortunate developments in 2019, including the grounding of Boeing 737 Max planes after two crashes within five months in Indonesia and Ethiopia killed 346 people, the airline managed to increase its number of passengers. Currently, 24 of THY’s aircraft are grounded, with 12 of them stationed in Seattle. As one of the companies hit hardest by the decision to ground the aircraft, it had to re-evaluate its operations strategy. The company is also awaiting the delivery of 75 more Boeing 737 Max jets.

Aycı added that in addition to the rise in the number of passengers, the company also managed to increase its cargo volume.

According to the December data, THY has also experienced a significant increase in the number of outward transfer passengers. The flag carrier, which transported 2.1 million passengers from Istanbul to 125 countries in the last month of the year, achieved double-digit growth compared with the same month of the previous year. The number of transit passengers has increased by 6.9% in December, raising its share in the total number of passengers to some 49.5%.
The company last month announced it carried over 74.3 million passengers in 2019, a year that witnessed some major developments such as a grand switch to Istanbul Airport in April and the grounding of the Boeing 737 Max aircraft fleet.