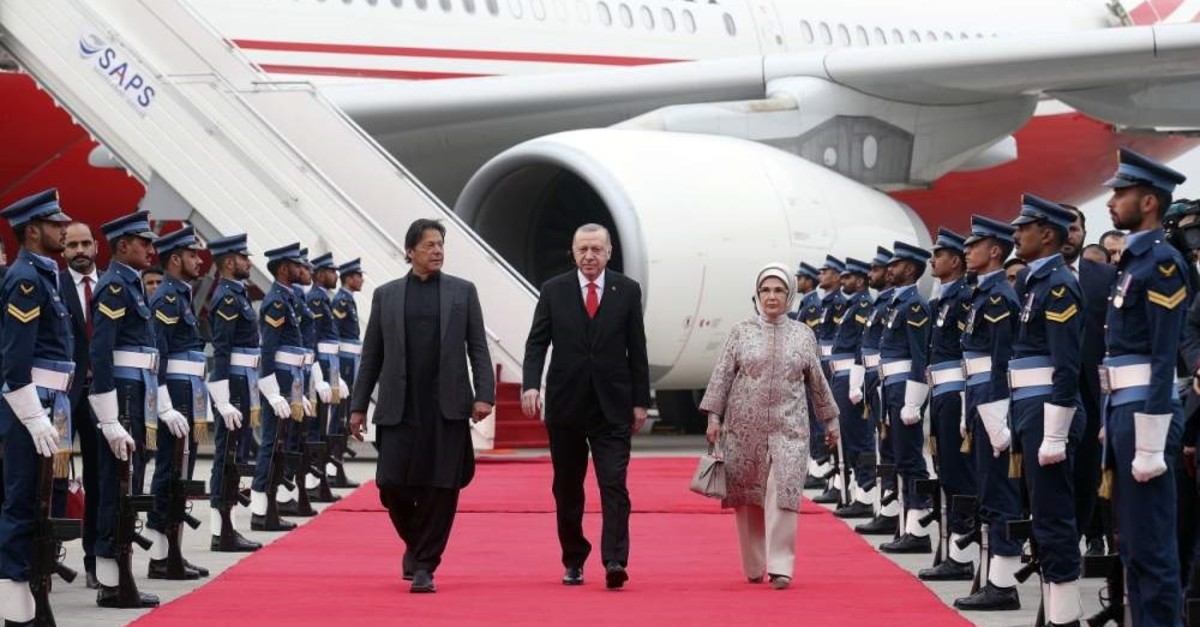 Deemed more important than previous ones, much is expected from President Erdoğan's Pakistan visit, which is expected to particularly boost bilateral trade and investments

Roads across Pakistan's capital Islamabad were decorated with Turkish and Pakistani flags as well as life-size portraits of the two countries' leaders as Pakistanis eagerly awaited President Recep Tayyip Erdoğan's arrival in the country Thursday.

Erdoğan's two-day visit has been deemed more important than the previous ones, as the two countries are eager to enhance trade and investments and their leaders attach great importance to the strengthening of economic ties, besides the bond of brotherhood.

Pakistan Prime Minister Imran Khan, together with his Cabinet ministers, welcomed Erdoğan, accompanied by a high-level delegation, at Nur Khan Airbase, a military base used to receive foreign government officials.

Two children presented bouquets to the president and first lady Emine Erdoğan. Pakistan's premier himself drove the president to the Prime Minister House, where a guard of honor was presented.

Erdoğan is expected to co-chair a high-level meeting with Khan during his visit – the fourth since 2002 and the second since he became president. The Pakistan-Turkey High-Level Strategic Cooperation Council (HLSCC) will also be attended by senior politicians and Cabinet members from both sides.

At the conclusion of the session, a joint declaration will be signed, Pakistan's Foreign Ministry said in a statement. "A number of important agreements/MoUs are expected to be concluded. The two leaders will have a joint press stakeout," the statement added.

Prior to the session, the two leaders will meet for discussions on a wide range of global and regional affairs. Along with the Pakistani premier, Erdoğan will address the Pakistan-Turkey Business and Investment Forum, which brings together leading investors and businesspeople from both sides. Erdoğan will separately meet Pakistani President Arif Alvi.

He is also scheduled to address a joint session of the Pakistani parliament on Friday for the fourth time, having done so earlier in November 2016, May 2012 and October 2009.

Pakistani and Turkish businesspeople gathered in Islamabad on Thursday to discuss ways to enhance bilateral trade and investment. The gathering was held at a special networking session, which was organized by Pakistan's commerce ministry on the occasion of Erdoğan's visit, said a statement by the ministry.

"The objective of this initiative was to bring the businessmen from Turkey and Pakistan under one roof to explore ways to enhance trade and investment," the statement added. Sardar Ahmad Nawaz Sukhera, Pakistan's secretary of commerce, welcomed the delegates in his opening remarks and mentioned strong relations between the two countries.

Prior to the visit, Dawood told Anadolu Agency (AA) Wednesday that Erdoğan's Pakistan visit is more important than the previous ones as it will bolster the already strong bilateral ties between the countries.

Islamabad is expecting "much more" out of this visit compared with the previous ones, he said.

"We look at this visit as very, very important. He (Erdoğan) is bringing a strong business delegation with him, which shows his eagerness to bolster trade and economic ties with Pakistan," he said.

"What I am expecting is that we already have the presence of Turkish companies here. But that's not enough. We want these numbers to double, even triple," Dawood said. "We want to increase cooperation with Turkish companies and to benefit from their expertise in different sectors, mainly construction, tourism, engineering, food processing, chemicals and information technology."

Referring to a long-awaited Free Trade Agreement (FTA) between the two countries, he said the two sides had agreed to prepare a "scoping list" to examine their respective sectors of strength, with an ultimate aim to boost the bilateral trade volume.

"I met the Turkish commerce minister in Davos, Switzerland (on the sidelines of the World Economic Forum meeting) twice. We have orally agreed on a framework to boost our bilateral trade volume," he said. "I am sure that on the basis of this study (scoping list), we will be able to identify the sectors to cooperate with."

"We have already signed the FTA with China, and now we are looking forward to follow suit with Turkey," the minister added.

"A number of agreements to boost trade relations is expected to be signed during the visit," Bahadır Siyez, the deputy chairman of the Foreign Economic Relations Board (DEİK) Turkey-Pakistan Business Council, told AA.

The dual citizenship issue, which had been on the agenda recently, is also expected to be discussed, Siyez noted.

The current bilateral trade volume is less than the actual potential as the two countries' economies complement each other, he underlined. "Therefore, we hope to increase trade volume two- to threefold," Siyez stressed.

He highlighted that there are opportunities for cooperation in Pakistan's mining industry as the country does not carry out "efficient" mining, prospecting and extraction works. "In addition, Turkey expects technology transfer and investment in various fields such as defense industry, tires, pharmaceuticals, chemicals and textile machinery," he noted.

Pakistan should clear up the bureaucratic issues for foreign investors, he suggested. "Prime Minister Imran Khan would like to add Turkey to the China-Pakistan Economic Corridor (CPEC) project which will pave the way for rising trade volume," Siyez said, adding that Pakistan will be an important trade hub in the region with its free trade zones.

The CPEC is a multibillion-dollar project including a network of rail, roads and gas pipelines to connect China to Pakistan's southwestern deep-sea Gawadar port to provide the shortest route for Chinese goods to reach the Middle East, Africa and Central Asia.

Erdoğan's visit will focus on increasing bilateral trade and investments through joint ventures, said an official from the Federation of Pakistan Chambers of Commerce and Industry.

"The business circles of Pakistan are very keen to explore opportunities where they can interact with the business community of Turkey through the B2B meetings," the official told AA, requesting anonymity.

Pakistan expects to receive Turkish investment in a number of sectors – including engineering, chemicals, construction, electrical appliances, machinery and defense sectors, he noted.