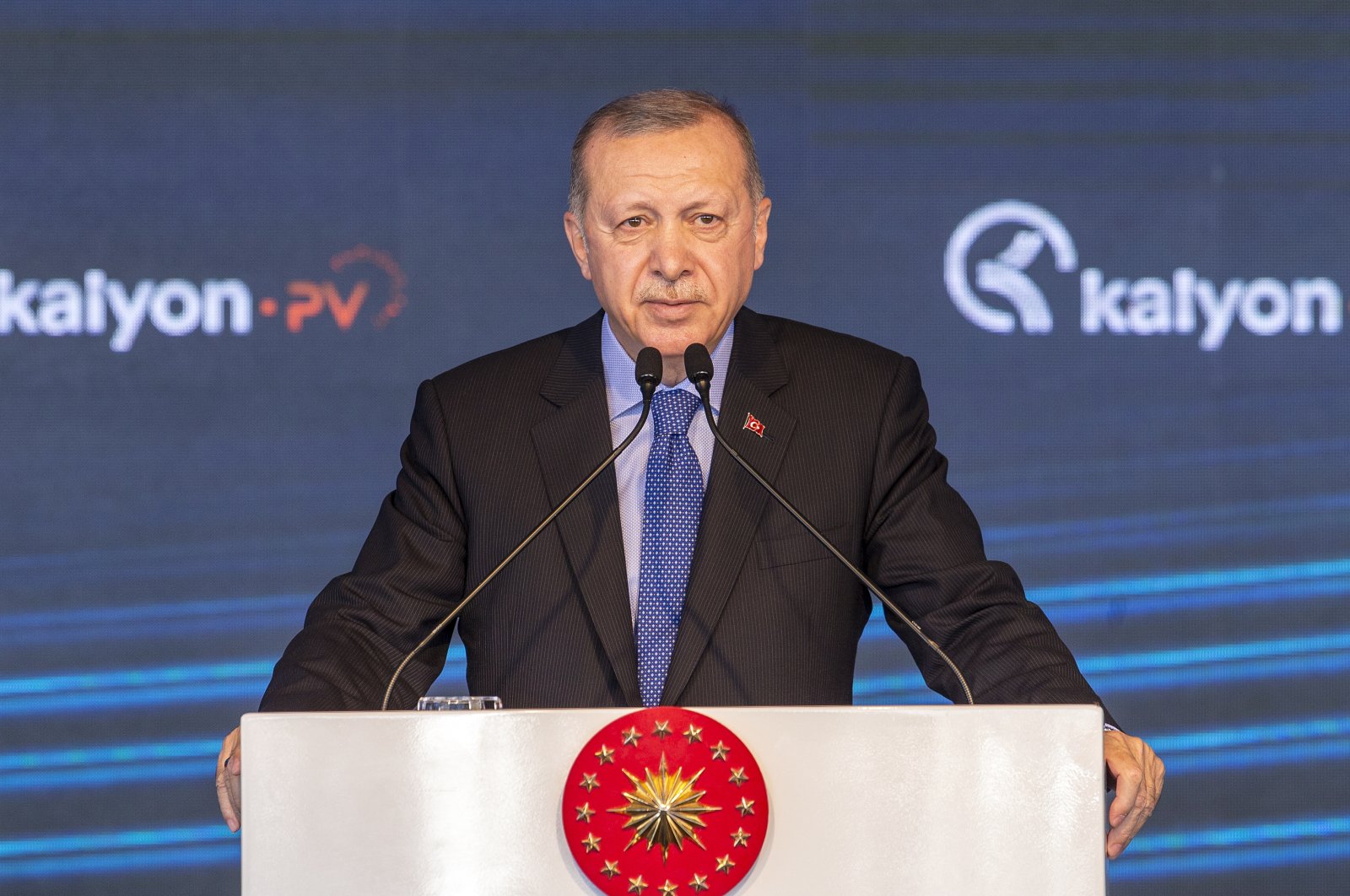 The world's attention on Friday will be turned toward President Recep Tayyip Erdoğan after he said Wednesday that he will be announcing “good news” that will open a “new period” in Turkey.

Speaking at the opening of a solar panel manufacturing facility in the capital Ankara, Erdoğan, without providing details, made his comment about a “good news” announcement, which Treasury and Finance Minister Berat Albayrak said would be “an axis shift” for Turkey.

“We are imagining, dreaming of this good news right now. I believe as of now that by giving this good news to our people on Friday, God willing a new period will be opened in Turkey,” Erdoğan said.

“If I announce it now, the excitement and all will be lost," he said.

Presidential Communications Director Fahrettin Altun on Thursday warned over speculations that were made about the news Erdoğan said he would announce Friday.

“Please turn a deaf ear to these speculations. We all together look forward to our president’s speech tomorrow,” Altun said on Twitter.

Several reports had emerged following the president’s remarks, claiming that his statement was related to Turkey’s discovery of energy resources in the Black Sea, while others claimed initial work in the Mediterranean Sea was also yielding positive signals.

Citing sources, Bloomberg on Wednesday claimed Turkey discovered energy in the Black Sea, most likely natural gas, but gave no indication of the size and depth of the find.

“There is a natural gas finding in the Tuna 1 well,” the source said. “The expected reserve is 26 trillion cubic feet or 800 billion cubic meters, and it meets approximately 20 years of Turkey’s needs.”

However, he cautioned that it could take seven to 10 years to start production and estimated investment costs between $2 billion and $3 billion.

Turkey has been exploring and drilling for energy resources in parts of the Black Sea region and the Eastern Mediterranean, believed to be rich in oil and natural gas.

Asked about the “good news” on Wednesday, Energy and Natural Resources Minister Fatih Dönmez told reporters he was “also waiting with curiosity.”

Following the reports, the Turkish lira firmed more than 2% against the U.S. dollar to as much as 7.22. The main share index rose by 2.95%.

The lira slid 0.8% to 7.35 versus the dollar after the Central Bank of the Republic of Turkey (CBRT) held its key rate steady as expected on Thursday and said it will continue backdoor liquidity measures that have tightened credit and supported the lira.

The dollar index, which tracks the greenback’s value against a basket of currencies, had climbed 1% above the two-year low at 92.12 hit on Tuesday and cemented gains at 93.01 in late morning London trading.

Reports also drove up energy companies as shares in Turkish refinery giant Tüpraş were up 7.58% and shares in petrochemicals company Petkim rose 9.87%.

Erdoğan on Wednesday said no threats can deter Turkey from seeking natural resources in the Eastern Mediterranean, adding that Ankara expects actors in the region to take steps to de-escalate tensions.

Turkey has accused Greece, France, Egypt, and other countries of trying to illegally deprive it of Mediterranean energy resources and box it in, even though it has the largest coastline on the sea of any country.

“Turkey is determined to seek its rights in the Eastern Mediterranean until the end,” Erdoğan said. “No colonialist power or threat can deter our country from the oil and natural gas resources believed to be in the region,” he said, adding Ankara wanted to solve the dispute through dialogue and diplomacy rather than escalate tensions.

In the first week of August, Turkey resumed energy exploration efforts in the Eastern Mediterranean after Greece and Egypt signed a controversial maritime delimitation deal.

The agreement came days after Ankara said it would postpone its oil and gas exploration as a gesture of goodwill.

But after declaring the Greek-Egyptian deal “null and void,” Turkey authorized its seismic vessel Oruç Reis to continue activities in an area within its continental shelf declared to the United Nations.

The ship will continue its two-week mission until Aug. 23, along with the vessels Cengiz Han and Ataman.

Ankara has consistently opposed Greece’s efforts to declare an exclusive economic zone (EEZ) based on small islands near Turkish shores, violating the interests of Turkey.

Turkey has also said energy resources near Cyprus must be shared fairly between the Turkish Republic of Northern Cyprus (TRNC) and the Greek Cypriot administration.