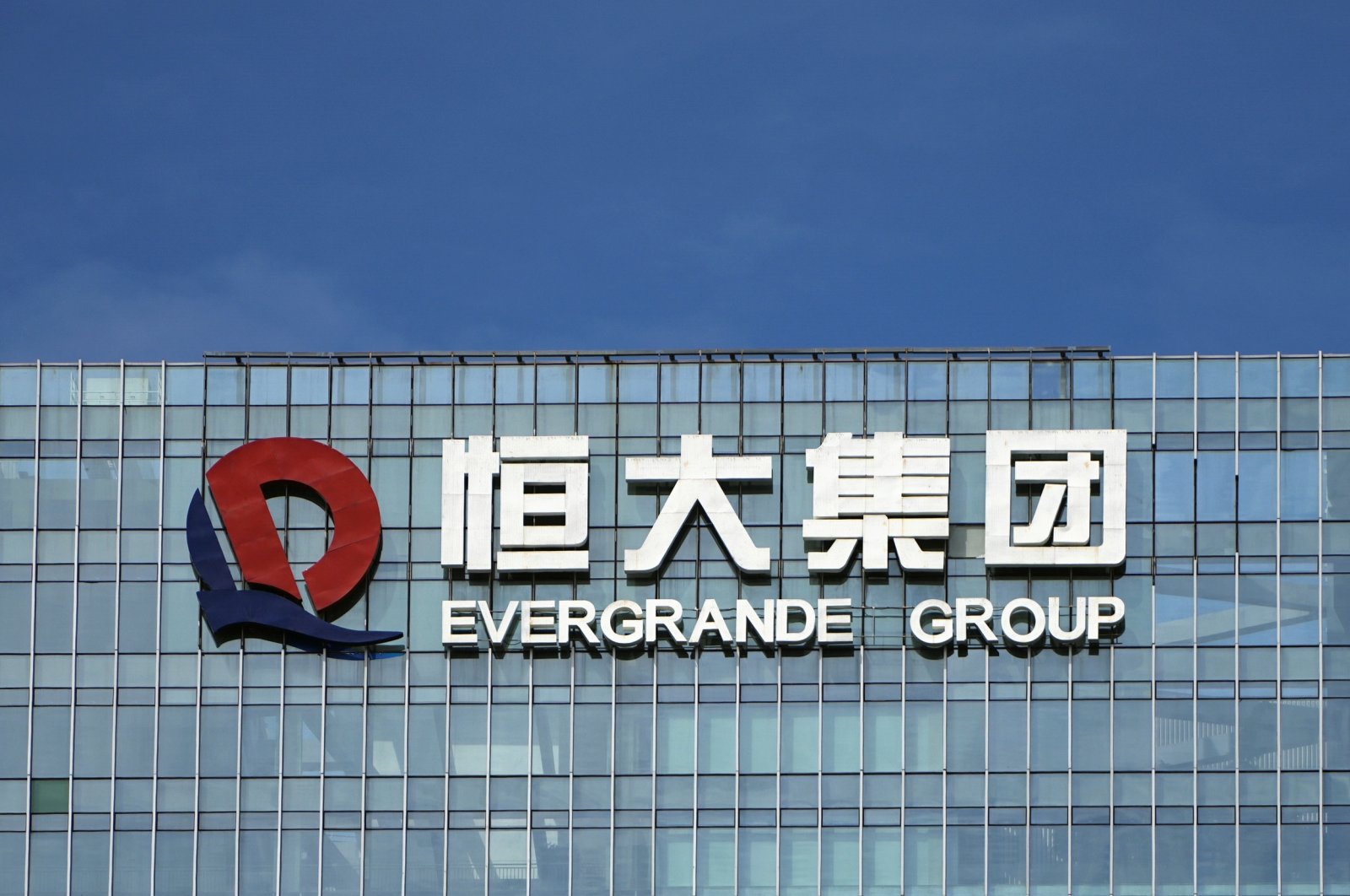 The company logo is seen on the headquarters of China Evergrande Group in Shenzhen, Guangdong province, China, Sept. 26, 2021. (Reuters Photo)
by Agencies Sep 27, 2021 10:44 am
RECOMMENDED

Shares in debt-laden China Evergrande’s electric vehicle unit plunged as much as 26% on Monday after it warned it faced an uncertain future unless it got a swift injection of cash and after it scrapped a proposed Shanghai listing.

The warning by China Evergrande New Energy Vehicle Group after the market closed on Friday was the clearest sign yet that the embattled property developer’s liquidity crisis is worsening in other parts of its business.

Shares of the electric car unit, also known as Evergrande Auto, slid to as low as HK$1.66 ($0.21) in early trade before paring losses to fall 2.2%. China Evergrande’s stock rose 5% to steady near the decade-low they made last week, while Evergrande dollar bonds were at distressed levels.

In the broader market, concerns that a collapse at Evergrande could drive a global crisis seem to have been ebbing.

“I think the markets have priced in that on the balance of probabilities, the shock and awe is over,” said Kyle Rodda, an analyst at brokerage IG Markets in Melbourne.

“Markets are really just expecting from here on in, a company that is doomed to failure but one which won’t be allowed to result in major risks within the Chinese financial system – or that (contagion) won’t pervade global markets,” Rodda was cited as saying by Reuters.

The property developer is struggling with more than $300 billion of debt from a years-long acquisition binge, including into electric vehicles once billed as a rival to Elon Musk’s dominant Tesla brand.

There are fears any defaults on tens of millions of dollars of interest payments could spark a chaotic implosion of the firm, China’s second-largest developer, with major repercussions for the domestic economy and the rest of the world.

Shares in the Evergrande plunged after it scrapped the planned Shanghai listing via a Sunday stock exchange filing.

In a separate exchange filing late Friday, it said its parent company’s cash crisis would have a “material adverse impact” on production.

The firm warned of a “serious shortage of funds” which forced it to suspend “paying some of its operating expenses and some suppliers.”

It admitted “there is no guarantee that the Group will be able to meet its financial obligations under the relevant contracts,” as it looks for strategic investors.

The car unit’s share price has lost 80% of its value since February this year.

Evergrande’s travails have spooked global markets and raised fears of a tightening of Chinese consumer confidence, which could quickly seep into everything from home buying to demand for steel as well as the appetite for luxury goods.

As the debt crisis threatened to overwhelm the company last week, Evergrande agreed a last-minute deal with domestic bondholders that would avoid default on one bond payment.

But it remained silent on a separate $83.5 million bond interest payment due one day later.

The group – which claims to employ 200,000 people and indirectly generate 3.8 million jobs in China – has said it is trying to avoid a bankruptcy that could reverberate around the world.

While the government has not yet decided to bail out the struggling firm, analysts say Evergrande could be forced to undergo a state-led restructuring similar to previous moves to save stricken corporate behemoths such as Anbang and HNA Group.

The Financial Times reported Monday that at least two local governments in China had taken control of sales revenue from Evergrande properties, as fears also rise of the social ramifications of large numbers of Chinese home buyers being left out of pocket.