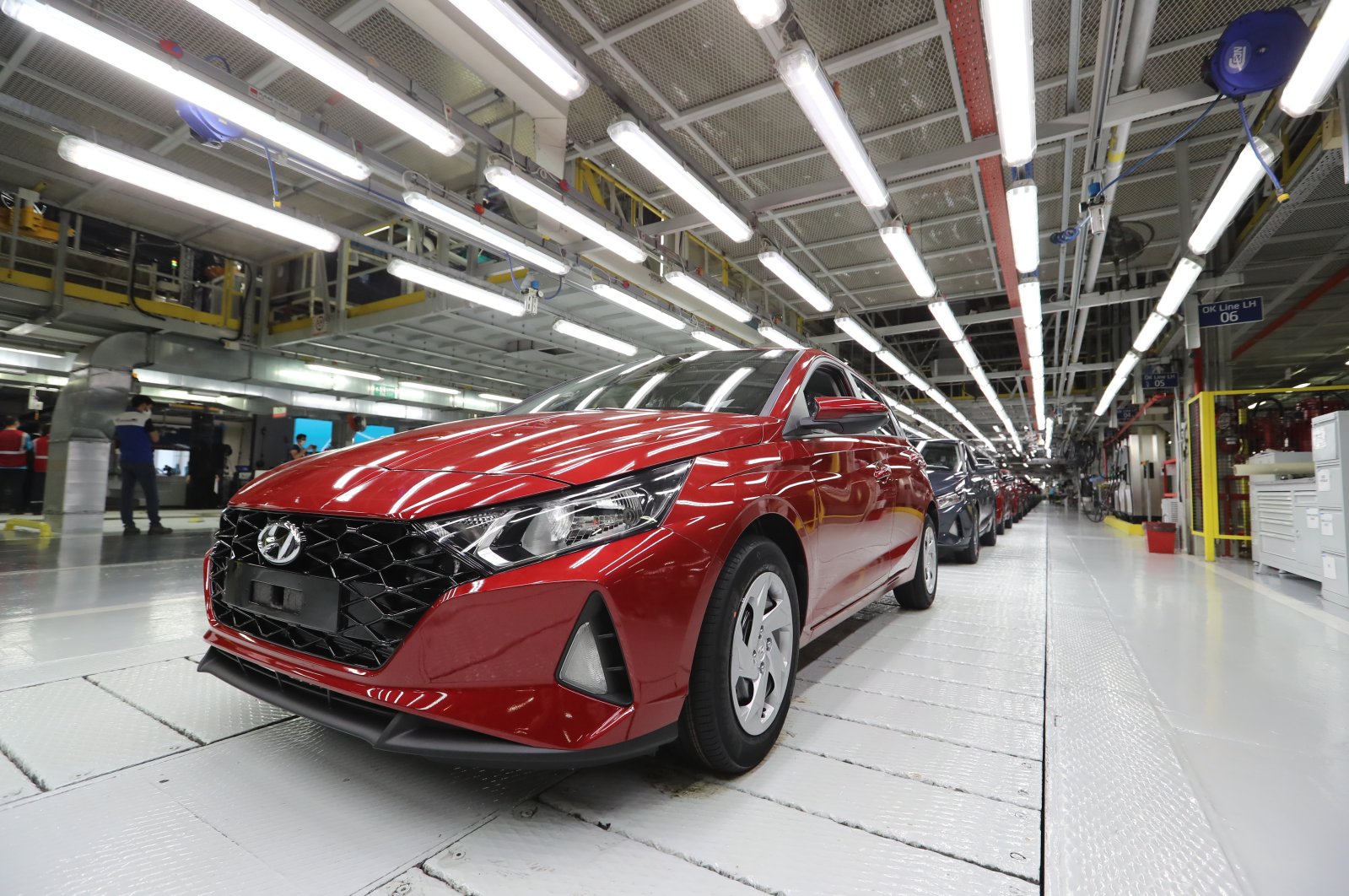 South Korean carmaker Hyundai Motor Company on Friday kicked off mass production of its revamped third-generation i20 at its joint factory in Turkey’s northwestern city of Izmit, which will account for 50% of the model's global production, according to Turkey’s industry and technology minister

Over 90% of the all-new i20, which has a sporty fresh design that is wider and longer and features a lower roof than its predecessor, produced at the Hyundai Assan Izmit Factory will be exported, with most heading to Europe, Mustafa Varank said, speaking at the ceremony marking the beginning of the assembly line.

“The production line we’re about to launch is a result of 27 months of hard work and a $194 million investment. About 85,000 units of i20 will be produced per year. So, this factory alone will cover about 50% of the global i20 production,” Varank said.

Locality ratio at over 60%

“The locality ratio of the i20 models produced here is at over 60%, and of course, this rate will also increase with time” he noted.

As the first overseas manufacturing facility of the South Korean automaker, the Hyundai factory is located on an area of 1 million square meters (around 10 million square feet) and has a production capacity of around 240,000 vehicles per year.

The factory has been producing A and B segments of i10 and i20 models.

Hyundai Assan, which celebrated its 20th anniversary in Turkey in 2017, is jointly managed by the Hyundai Motor Company and the Turkish Kibar Group, which hold 70% and 30% of shares, respectively.

The facility has an export volume of $1.7 billion, which places Hyundai Assan among Turkey’s top five exporters, Varank said. The cars are being exported to over 40 countries, with most of them going to Europe, including Germany, the U.K. and Italy.

Hyundai Assan CEO Ickkyun Oh recalled that the factory, which was established in 1997, has been growing together with the country’s economy for the last 23 years.

“To date, we have produced more than 2 million vehicles for export to Europe, the Middle East and North African countries through Turkey’s domestic market. I am very happy to have successfully completed the development process of the new i20, which we have been working on continuously for exactly two years and three months,” he said.

The Izmit factory will be producing 100,000 units of the new i20 model per year, he added. “As a car with an innovative design and the highest level of quality, we will export it from Turkey to all parts of the world. Thus, we will contribute to the Turkish economy and export revenue.”

Also attending the ceremony, South Korea’s Ambassador Choi Hong Ghi called the Hyundai Assan Izmit Factory a symbol of the economic cooperation between the two countries. He said the factory has been directly contributing to Turkey’s employment and its exports.

“With the launch of the new i20 model, we hope that the Hyundai’s Turkey factory will make a leap forward and we look forward to expanding and developing the economic cooperation between South Korea and Turkey,” Choi added.

Hyundai Assan Chairman of the Board Ali Kibar stated that the latest i20 was built on a new technological platform to achieve both the highest number of sales in the European market and become the segment leader.

“In addition to the multi-engine and transmission options, we also offer the new i20 for the first time in a more environmentally sensitive hybrid version. The new i20, designed with the goal of being the best in its class, is designed to secure market share in the B segment with a sales projection of about 350,000 units to Europe,” Kibar noted.

Varank also said Turkey aims to become a hub for battery production with its investments in battery modules, packages and cells. To reach this goal, he noted that the country will support electric-electronic firms' investments in the automotive sector.

Turkey, which has developed a battery-powered car, SUV, tractor and excavator over the past one year, has its sights set on electricity-powered vehicle technologies.

Varank highlighted that Turkey aims to be the largest electric and autonomous vehicle producer in Europe and among the top-five in the world by 2030.

Varank underlined that the automotive sector is the locomotive for Turkey's industry sector and offers advantages for other sectors as well, with industrial production expanding with double-digits in May and June.

He also said Turkey disbursed 1,200 investment incentive certificates during the first six months of the year worth TL 108 billion ($16.7 billion) that will create 163,000 new jobs.

The automotive industry has been the country’s export champion for more than a decade and amounted to $30.6 billion in 2019, Turkey's second highest-ever figure, according to official data. The industry had hit an all-time high of $31.6 billion in 2018.

“We can export to more than 200 countries across five continents. The industry employs over 200,000 people. We’re talking about a really tremendous ecosystem of manufacturing and innovation,” Varank said.

“Unfortunately, the sector suffered severe losses on a global scale until June with the pandemic. Production losses deepened in almost all major markets, especially the European Union. There were production declines varying between 40% up to 85% in Germany, the U.K., France, Italy and Spain. Beginning in June, foreign markets began to return to normal again,” Varank said.