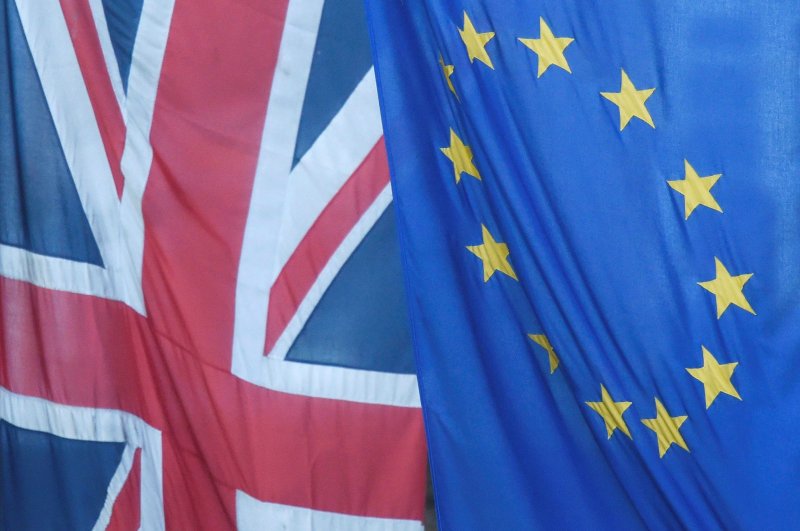 A Union flag flies next to the flag of the European Union in Westminster, London, Britain, June 24, 2016. (Reuters File Photo)
by REUTERS Feb 27, 2020 5:25 pm
Edited By Ayşe Betül Bal
RECOMMENDED

Britain unveiled a negotiating mandate on Thursday for talks with the European Union that puts it on a collision course with Brussels, saying it was ready to walk away if “good progress” was not made by June.

After officially leaving the EU last month, Britain has until the end of the year to negotiate a trade deal and agreements on everything from fishing to transport, to replace more than 40 years of closely aligned political and economic relations.

Having accepted that, by leaving the EU’s customs union and single market, British businesses will encounter new “frictions” in trade with the bloc, the government has made its stance clear – self-determination must trump economic concerns.

So if, by June, “good progress” has not been made on Britain’s demand for what it calls a “standard” free trade agreement or even on the “least controversial areas” of the talks, London said it would focus on preparations for a sharp break with the EU.

“At the end of the transition period on the 31st of December, the United Kingdom will fully recover its economic and political independence,” cabinet office minister Michael Gove told parliament as he unveiled the mandate.

“We want the best possible trading relationship with the EU, but in pursuit of a deal we will not trade away our sovereignty.”

Prime Minister Boris Johnson, the face of Britain’s campaign to leave the EU in 2016, vowed to get Brexit done at last year’s election and, after winning a large majority, has charged his team with the goal of “taking back control.”

Both sides say they want a deal to be agreed before the deadline of Dec. 31, 2020, so that trade can flow, albeit with some additional checks, and that arrangements on issues such as aviation can roll over seamlessly.

But with the two sides unable to agree on even the format of talks scheduled to begin on Monday, the negotiations look set to be a battle of wills.

Michel Barnier, the EU’s chief negotiator, said Brussels had taken “note” of the mandate. “We will stick to all our prior commitments in the political declaration,” he tweeted, referring to an outline agreement on future ties signed by both sides.

“We want an ambitious and fair partnership with the UK in the future.”

“The government’s ambition for our new relationship with our most important trading partner is frankly underwhelming,” said Paul Blomfield, a Labour spokesman on Brexit.

With a large majority in parliament, Johnson and his team feel he has won public backing for a clean break in ties to restore what he calls British sovereignty.

That is at odds with Brussels’ pursuit of a closer trading relationship.

At the heart of the conflict is Britain’s demand for a trade deal along the lines of one between the EU and Canada.

The EU has ruled that out, saying Britain, being a neighbor of the bloc, is a greater threat to the bloc’s market as it does more business than Canada. It fears Britain could undercut its market by lowering standards.

“Geography is no reason to undermine democracy,” Gove told parliament. “To be clear, we will not be seeking to dynamically align with EU rules on EU terms governed by EU laws and EU institutions.”

This in effect ruled out a demand from the EU to adhere to its “level playing field” – shorthand for agreed baseline rules on environmental standards, labor regulations and state aid.

Robert Gardener, director of government relations at the law firm Hogan Lovells, said: “It’s clear that the government has made a political calculation that delivering Brexit requires the autonomy to diverge but not necessarily the decision to diverge.”

If a standard trade agreement is not on offer, Britain has said it will pursue what it calls a relationship similar to that established between the EU and Australia. At the moment, much of EU-Australia trade runs along basic World Trade Organization default rules, though there are specific agreements for certain goods.

Other stumbling blocks include fishing.

Britain says that, as an independent coastal nation, it will not trade away its fishing rights. Britain is also demanding “legally binding” obligations on access to the EU market for its important financial services industry, something the EU says is not on the agenda.

“We want and we will always seek the best possible relationship with our friends and allies in Europe but we will always put the welfare of the British people first,” Gove said. “That means ensuring British people exercise the democratic control over our destiny for which they voted so decisively.”