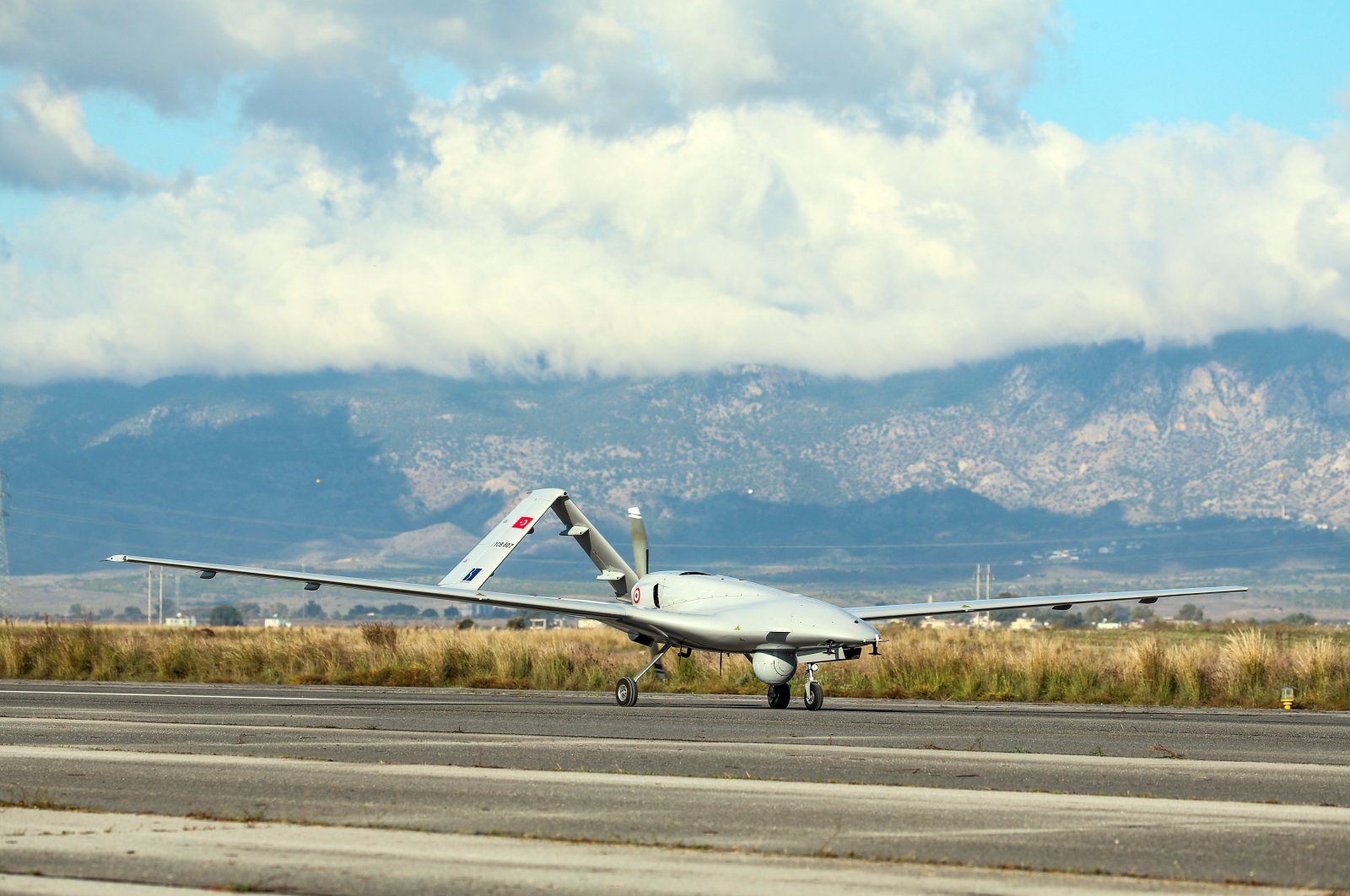 A culmination of years of investment and evolution, Turkish-made armed drones have made the country much more effective on the battlefield against the Bashar Assad regime in Idlib. The devices' extensive deployment has put forward a 'new military doctrine in the world,' according to some experts

Turkey’s extensive deployment of armed drones that has caught off guard and struck hard Syrian regime forces in and around northwestern Syria, just across from Turkey's southern border, has received extensive coverage in the international media.

A steady stream of black-and-white drone video footage showing Turkish-made armed drones hitting and destroying everything from tanks and air missile defense systems to howitzers as well as military bases and chemical warfare depots dominated news channels and social media, while some experts say Ankara’s deployment has put forward a “new military doctrine in the world.”

The mass coordinated strikes were prompted by an Assad regime attack on Feb. 27 that killed 36 Turkish soldiers and injured dozens of others in the Idlib de-escalation zone in northwestern Syria.

Deployed homegrown drones, Bayraktar TB2, developed by Turkey’s leading unmanned aerial platform developer Baykar Makina, and ANKA, produced by Turkish Aerospace Industries (TAI), have given Turkey a vital edge in the field and mark the culmination of years of investment and evolution for Turkey, whose military has become one of the most experienced users of drones. They have become a symbol of national pride as the country seeks to shed its reliance on outside powers and become a leading defense exporter.

The capabilities of Turkey’s drone fleet have been proven in combat with recent series of strikes against the regime, a report published by C4ISRNET, a publication that covers technology for defense and intelligence communities, said.

Turkey’s decision to send a mass-coordinated unmanned-aerial-vehicle (UAV) attack points to its availability of options, an expert told C4ISRNET.

“Given a very complicated battleground in Syria — where Syrian and Russian air defenses protect key assets and where Iranian forces operate alongside their Assad allies — Turkey’s decision to send a mass coordinated UAV attack points to its availability of options,” said Samuel Bendett, an adviser at the Center for Naval Analyses.

"Rather than send a piloted aircraft that could be lost, with the pilot killed, Turkey sent unmanned systems, whose loss is less profound and does not ultimately impact Turkish military capability. Turkey is also able to gather key intel on Syrian air defenses, especially those that managed to down Turkish UAVs,” he added.

At least seven Turkish drones were targeted by Syrian air defense systems, but the drones were reportedly still able to strike their targets. "A swarm the recent strike was not, but for the people targeted on the ground, a remotely piloted salvo is just as deadly a proposition," the report added.

“If they tried to do this without drones, in any other way, it would have taken longer and there would have been a greater loss of Turkish life,” Ekşi noted.

Turkey for the past 10 years has been developing its national industrial capacity of UAVs, outdistancing countries like France, a French daily L'Opinion said on Thursday.

The Turkish military showed its capacity in UAV operations over the last week, the daily noted, adding that the drones Turkey has developed were smaller, less costly and more effective than those used by France.

It emphasized that Turkey's Operation Spring Shield in northwestern Syria was to stop the Assad regime from capturing the Idlib region, noting that the operation began conducted per NATO standards.

The newspapers emphasized that Turkey was currently producing better-performing UAVs and that its military could field operations without the support of the Russians due to its capabilities in electronic warfare.

Ankara on Sunday announced that the Turkish military launched Operation Spring Shield in Idlib in response to the brutal regime attack on Feb. 27 and to protect civilians from regime attacks.

The soldiers were stationed there as part of a deal reached in 2018 with Russia to protect the civilian population and counterterrorism groups.

The regime and its allies have consistently broken the terms of the 2018 cease-fire and a new one that started on Jan. 12, launching frequent attacks inside the territory. This has resulted in casualties, as well as a recent influx of civilians fleeing regime violence along the border of Turkey, which already hosts over 3.7 million Syrian refugees.

‘New military doctrine in the world’

Turkey’s extensive deployment of armed drones in its fight against Syrian regime forces has put forward a "new military doctrine in the world," a defense expert said.

"For the first time in the world, drones were used as the primary element in air strikes during Turkey's Operation Spring Shield," said Bahri Mert Demirel, a defense industry expert in Turkey.

The use of drones in this manner "has put forward a new military doctrine not only in Turkey but also in the world's literature on warfare," he told Anadolu Agency (AA) Thursday.

Turkey previously used armed drones in Syria during Operation Euphrates Shield (2016), Operation Olive Branch (2018) and Operation Peace Spring (2019), which it had launched to prevent the formation of a terror corridor and enable locals to live peaceful lives.

But in these operations, the drones were deployed before operations to launch intense air attacks, he said.

Since 2016, Turkey has launched a trio of successful anti-terrorist operations across its border into northern Syria to prevent the formation of a terror corridor and enable locals to live peaceful lives: Operation Euphrates Shield, Operation Olive Branch and Operation Peace Spring.

For the first time, Turkey used armed drones as the primary element in Operation Spring Shield, he said, adding that Turkey’s armed forces have not yet launched a ground attack in Idlib as part of the operation.

Speaking on the purpose of using drones on the battlefield, Demirel said in general, UAVs are intended to be used as close air support.

Apart from this, they are used to gather electronic and signal intelligence and are also deployed as a support element for other air force elements, added Demirel, who has authored several research papers on the defense industry.

He said drones have been used for years to hit targets on the ground.

Among a large amount of video footage, including a series of those posted on Twitter by the Defense Ministry, showing Turkish drone strikes targeting a range of regime assets, the one showing Bayraktar TB2 armed drone striking an apparently active Russian-made Panstir S-1 air defense system deployed inside Idlib went viral on social media.

The clip shows Pantsir S-1 mounted on its eight-wheel-drive truck sitting placidly as the MAM-L smart ammunition projectile, developed by leading defense company ROKETSAN and fired from Bayraktar TB2, barrels toward it. The apparently active system failed to detect the incoming missile or possibly the drone that was flying over the range of the radar.

"Pantsir could not perform its duty in Syria because Turkey carried out very serious electronic warfare and deployed radar electronic attack systems including KORAL to intercept and deceive radar systems in Syria," he said.

Meanwhile, Turkey’s armed forces currently do not have drones that are capable of launching air-to-air attacks on Russian and Syrian aircraft.

Turkey realized its program of developing and producing drones over a short span of 10 years. With these products, the Turkish armed forces have gained serious experience through operations in Syria and Iraq.

Turkey has the most extensive operational capabilities and experience in the use of drones among European countries.