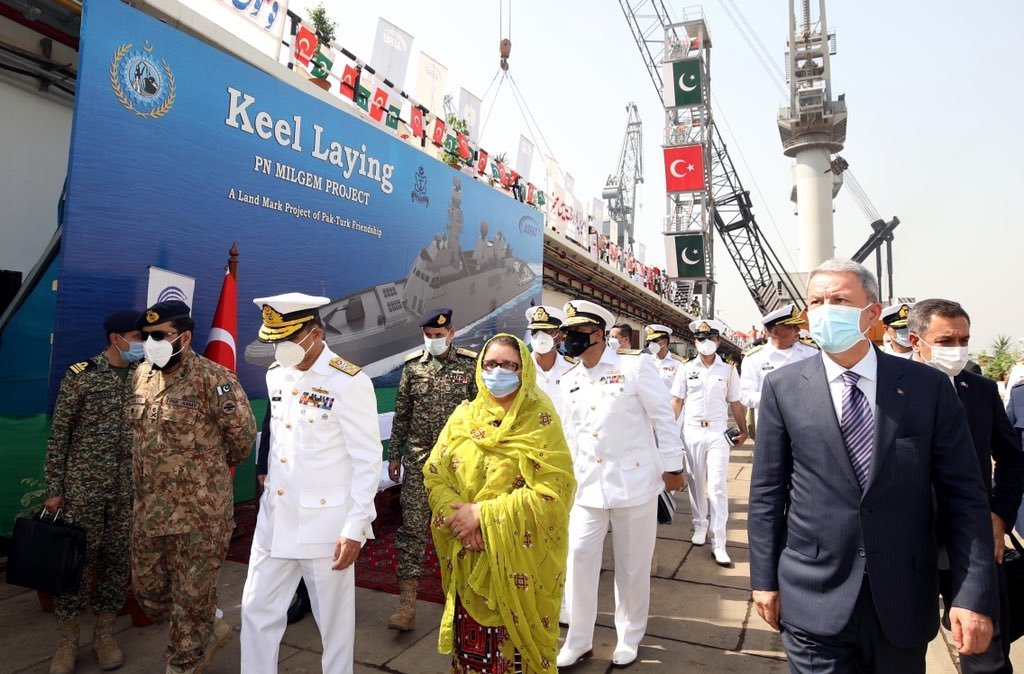 The keel of the third Turkish-built MILGEM corvette for the Pakistan Navy was laid down in a ceremony Sunday.

The Turkish National Defense Ministry firm ASFAT project will build four vessels for the Pakistan Navy, in what has been dubbed as the single-largest export of the flourishing Turkish defense industry.

Speaking at the ceremony, Akar expressed his pleasure at being in Pakistan and underlined that the two countries' "excellent" relations were unique due to their long history.

Ankara and Islamabad cooperate in many different domains, said Akar, adding that the "Pakistani people, because of their invaluable support during our war of independence, have a special place in our hearts and minds. Turkish people will never forget the generosity of the Pakistani people with whom we're always together, in good and bad times."

Pakistan's Defense Production Minister Khan thanked Akar, ASFAT and all the other contributors to the MILGEM project.

"The MILGEM project will always be remembered as a symbol of Turkish-Pakistani friendship," she said, praising the brotherhood between the two countries.

She underlined her hopes of maintaining this cooperation and developing more vessels and new joint projects at the Karachi shipyard, adding that MILGEM-class corvette will play a pivotal role in meeting the operational needs of the Pakistani Navy.

Khan highlighted Pakistan's need to build a strong navy, in line with its interest at sea, due to its geographical position and the current geostrategic environment.

The corvettes from the project will feature start-of-the-art sensors and the most advanced weapon platforms, the Pakistani Navy said on Twitter.

They will contribute to "maintaining peace, security and balance of power" in the Indian Ocean Region, it underlined.

Noting the Turkish defense industry's improving capabilities, Akar said Turkey has made significant progress in many fields, under the leadership of President Recep Tayyip Erdoğan.

He said taking up such a large project and delivering the vessel on schedule, despite all the negative effects of the coronavirus pandemic, while following the principles of the lowest cost, highest quality and the shortest time was very important, in terms of showing the joint project management capability, discipline and determination of both countries.

Akar reiterated that seven Turkish companies were among the biggest 100 defense companies in the world and added that Turkey was happy to share its knowledge with Pakistan.

The Pakistan Navy signed a contract with ASFAT in July 2018 to acquire four MILGEM-class ships.

In October 2019, President Erdoğan, along with Pakistan Navy chief Adm. Zafar Mahmood Abbasi, cut the first metal plate of the first corvette during a ceremony in Istanbul.

Turkey is one of the 10 countries that can build, design and maintain warships using domestic capabilities.

Turkey has built four corvettes so far in line with the program, namely the TCG Heybeliada, the TCG Büyükada, the TCG Burgazada and the TCG Kınalıada, while the fifth vessel, the first MILGEM I-class frigate of its kind, the Istanbul Frigate, is still under construction and is expected to boost the country’s capacity and pave way for further export opportunities.

Following the ceremony, Akar and his Pakistani counterpart held a meeting to discuss the possibilities of further cooperation in the defense industry, as well as in bilateral and regional matters.