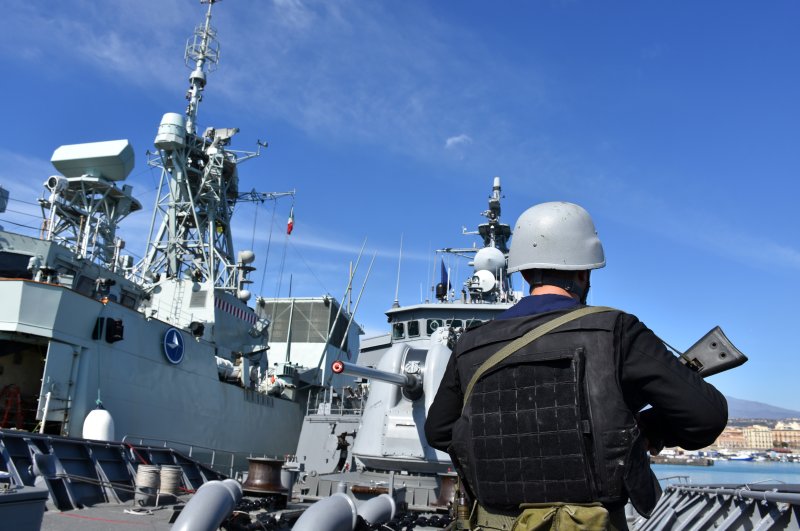 One of the most modernized frigates of the Turkish Navy, the TCG Salihreis, is taking part in NATO’s "Dynamic Manta-2020" drill, ranking it second in countries contributing to several NATO maritime missions, the captain of the vessel said.

The drill started on the Mediterranean island of Sicily on Monday and is expected to last until March 6, aiming to enhance cooperation between allies through war games conducted both on the surface and below the water. The drill began with the participation of nine allied nations, including Turkey, Canada, France, Germany, Italy, Spain, the U.K. and the U.S.

The TCG Salihreis, a Barbaros class frigate, was constructed in Germany in 1998, and the modernization of the frigate is being carried out domestically in Turkey with the cooperation of leading defense contractors, defense industries and naval forces.

The captain of the frigate, Navy Capt. Alper Doğukanlı, told Anadolu Agency (AA) that the TCG Salihreis has guided shells that can be used against surface ships and aircraft, the weapons and sensor systems required for its own defense, and can be landed with “AB212" or "Sea Hawk" type helicopters.

A total of 45 antisubmarine warfare exercises are set to be carried out during the exercise, Doğukanlı added.

"This drill, which is hosted by Italy in the Ionian Sea and the Central Mediterranean, is aimed at advanced coordinated submarine defense warfare training based on complicated scenarios for the implementation of air, above and underwater cooperation methods against the submarines,” he said.

Speaking on Turkey’s contributions to NATO in relation to the ongoing drill, Doğukanlı said the Turkish Naval forces have been carrying out its responsibilities within the alliance with utmost attention apart from its own exercises being conducted in surrounding seas.

“The Turkish Navy continues to contribute to the NATO Permanent Naval Mission Groups as much as possible. Turkey ranks second in contributions to the Standing NATO Maritime Group 2 (SNMG2) as well as the Standing NATO Mine Counter TASK Group," he noted.

He also said works are ongoing for the activation of the Turkish High Readiness Maritime Task Force (TURMARFOR), initially launched on July 6, 2018, and declared to NATO. He added that Turkey’s flagship, the multi-purpose amphibious TCG Anadolu, is expected to be added to the inventory by the end of this year and will contribute to the alliance along with the Turkish Navy thanks to its ability to carry combat aircraft and be capable of power transmission.

“The maritime component command of NATO for 2023 and 2028 was assigned to Turkey, along with the amphibious task force command and landing force command in 2025 within the scope of NATO’s long-term commitment plans,” he said.