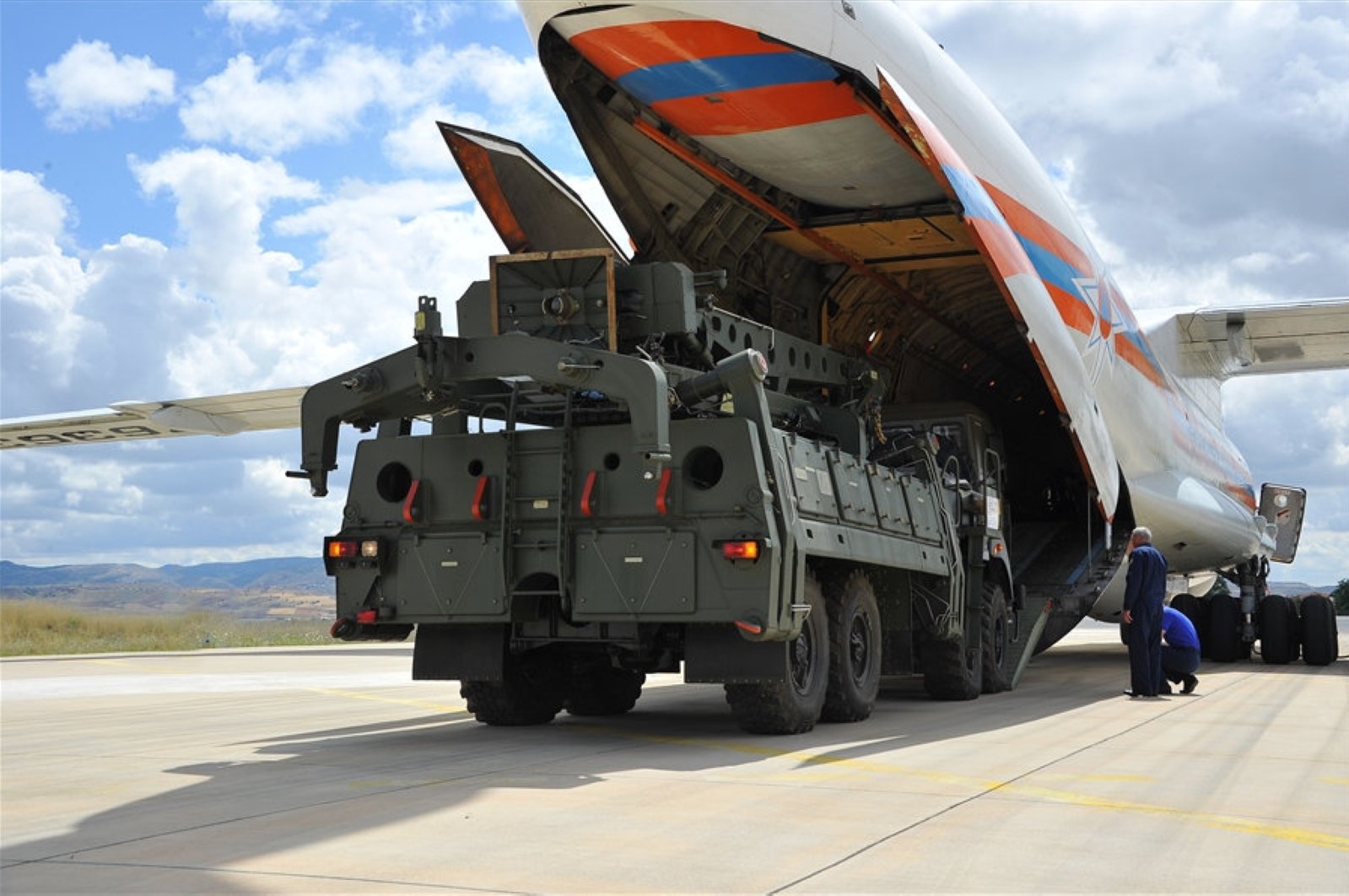 Military vehicles and equipment, parts of the S-400 air defense systems, are unloaded from a Russian transport aircraft, at the Murted Military Airport, Ankara, Turkey, July 12, 2019. (Turkish Defense Ministry via DHA)
by Daily Sabah with Reuters Apr 15, 2020 11:54 am
RECOMMENDED

Turkey on Tuesday repeated an offer to the U.S. to establish a technical working group, including NATO, to help solve a dispute over Ankara's purchase of a Russian missile defense system.

Speaking at a virtual Atlantic Council event, Foreign Minister Mevlüt Çavuşoğlu said Turkey's stance on how to solve the issue had not changed.

Before the outbreak of the coronavirus shifted focus away from the issue, Ankara's bilateral ties with Moscow took a heavy blow over Russia's support for the Bashar Assad regime's military offensive on the northwestern Syrian town of Idlib.

Ankara and Moscow on March 5 agreed to halt military activity in the region to contain the escalating conflict. The meeting came after regime forces attacked Turkish soldiers and civilians on the ground, causing Turkey to launch a renewed operation in Syria.

Turkey launched Operation Spring Shield on Feb. 27 after at least 34 Turkish soldiers were killed in an Assad regime airstrike in Idlib and after repeated violations of previous truces.

After some heavy fighting, Turkey asked Washington to deploy its Patriot missile defense system along its border with Syria for protection and said it was ready to purchase the systems from the U.S. as well.

President Recep Tayyip Erdoğan in March said the U.S. has offered to sell Turkey the system if Ankara promised not to operate the rival Russian system.

Both Turkey and the U.S. have largely kept silent on the S-400 issue since.

Çavuşoğlu added that Turkey was still willing to purchase Patriot batteries if the U.S. had a good offer.

Previous talks between Turkey and the U.S. on the purchase of the Patriots had collapsed over a host of issues, from the S-400s to Ankara’s dissatisfaction with Washington’s terms. Turkey has said it will only agree to an offer if it includes a technology transfer and joint production terms.

Ankara has repeatedly stressed it was the U.S.' refusal to sell it Patriots that led it to seek out other sellers, adding that Russia offered it a better deal, including technology transfers. Turkey even proposed setting up a commission to clarify any technical issues, but the U.S. has so far not responded to this proposal.

During a visit to Washington last November, Erdoğan met U.S. President Donald Trump and agreed with him on setting up a working group.

The Ankara-Moscow S-400 deal was inked back in April 2017, when the parties signed a $2.5 billion agreement for two S-400 batteries. The S-400 is Russia's most advanced long-range anti-aircraft missile defense system in use since 2007.