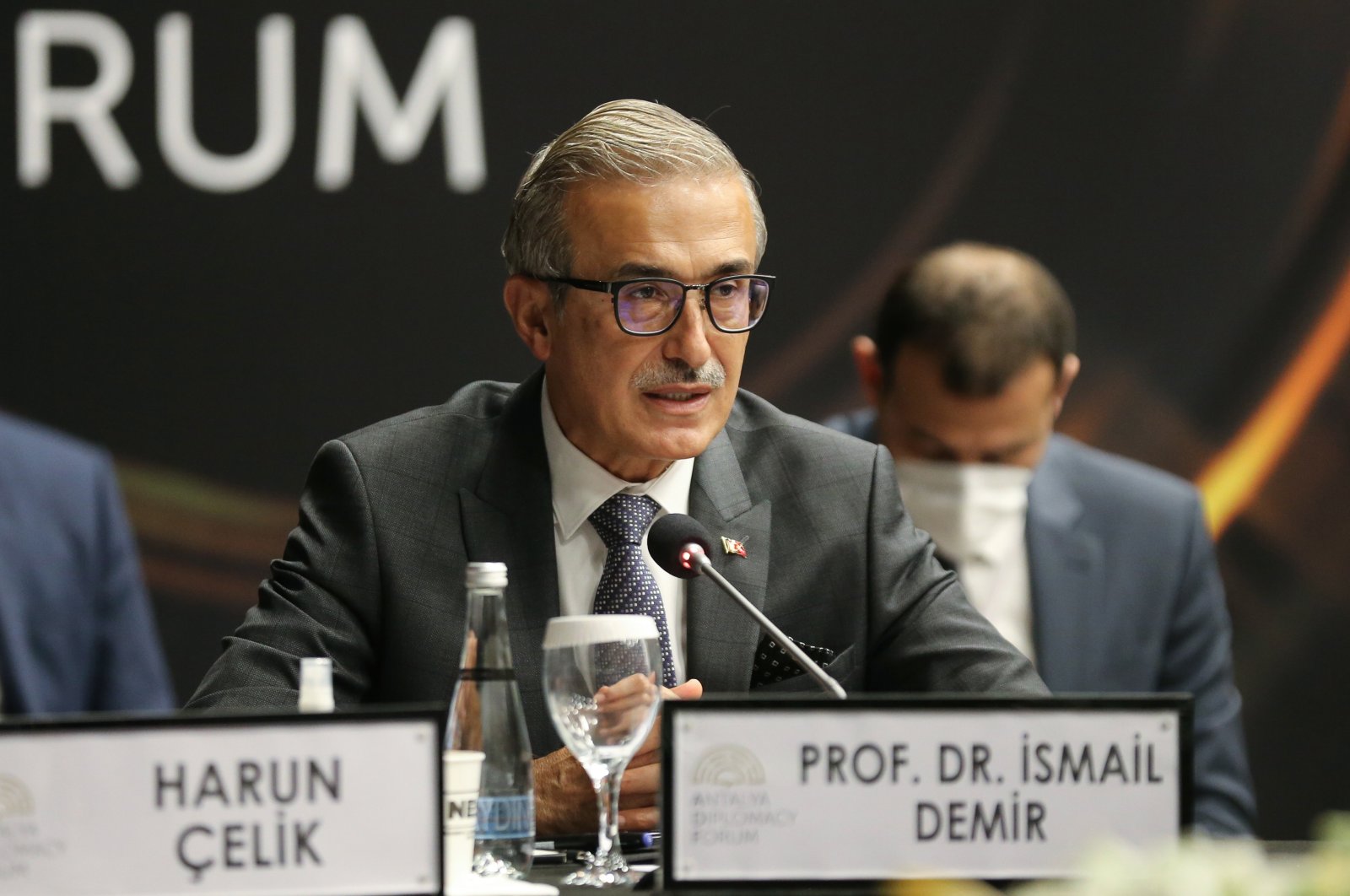 Ankara’s defense industry is a significant means of conducting diplomacy and enhancing ties with other nations, Presidency of Defense Industries (SSB) Chairperson Ismail Demir said, adding that the industry is also a way of introducing Turkey to the world.

“The issue of the defense industry is a highly significant issue in diplomacy,” Demir told reporters on the sidelines of the Antalya Diplomacy Forum, held by the Turkish Foreign Ministry in the southern province.

“The defense industry is not a sole technical area, it influences relations with other countries. Although it is a closed area, sometimes it can open doors or can be an important power for discussions on the table,” he added, explaining that you are as strong in negotiations as your defense industry is on the field.

Pointing out that Turkey is now in the major leagues in this regard, Demir highlighted that Ankara pursues its policy not on the basis of making money for the industry but to enhance relations on a “win-win” basis.

Developing nations, in particular African countries, have a positive view of Turkey's defense industry, he added.

“The export of defense industry products is one issue, but on the other side, the deep relations we build with those countries is of more importance. The relation that will be established with that country is way more important than figures.”

“Our defense industry cooperation with the continent of Africa is enhancing. The fact that we can sign one agreement in one day displays the level of interest,” he pointed out, saying that cooperation is not just limited to financial issues but also training people, international relations and involvement in assistance.

He elaborated that these relations are determined according to several factors including whether the country has the financial resources to buy products, improving the country's equipment and training.

“We see defense industry products as a key element in relations. Instead of saying ‘either you buy this key or not,’ we pursue a policy of determining how this key can be used in goodwill to create a win-win relationship.”

Touching on the interest in Turkey’s defense industry, Demir said that in the past foreign companies largely attended defense industry fairs to try to sell products to Ankara, but today the number has decreased.

“Now they are not that motivated anymore to sell Turkey products because they know they cannot,” he stated, indicating that Turkey’s own industry is improving rapidly.

Demir said that Turkey is open to win-win cooperation and joint production and projects.

On the other hand, Demir also praised the Turkish defense industry’s success in the field of unmanned aerial vehicles (UAV) and armed UAVs. He stated that some circles tried to spread misinformation about the UAVs, alleging that autonomous models attack targets without distinction.

“Although technologically we are able to use this capability on the field, we never engage in targets that are not determined 100%, the target is controlled by humans,” Demir said, referring to the KARGU UAV.

Demir also spoke about the ongoing problem between Ankara and Washington regarding Turkey’s purchase of the S-400s.

Saying that there are no developments in regard to the issue, Demir underlined the need for dialogue channels and mutual understanding.

The U.S. argued that the system was incompatible with NATO systems and could potentially be used by Russia to covertly obtain classified information on the F-35 jets. Turkey, however, insists that the S-400 would not be integrated into NATO systems and would not pose a threat to the alliance.

On the F-35s, Demir said that Turkey is working on several parameters and has a road map. He added that U.S. companies were similarly negatively affected by Turkey’s removal from the program and that Ankara’s legal process would benefit them in this regard.

Demir reiterated that Turkish companies are continuing to send parts of the F-35s to the U.S.