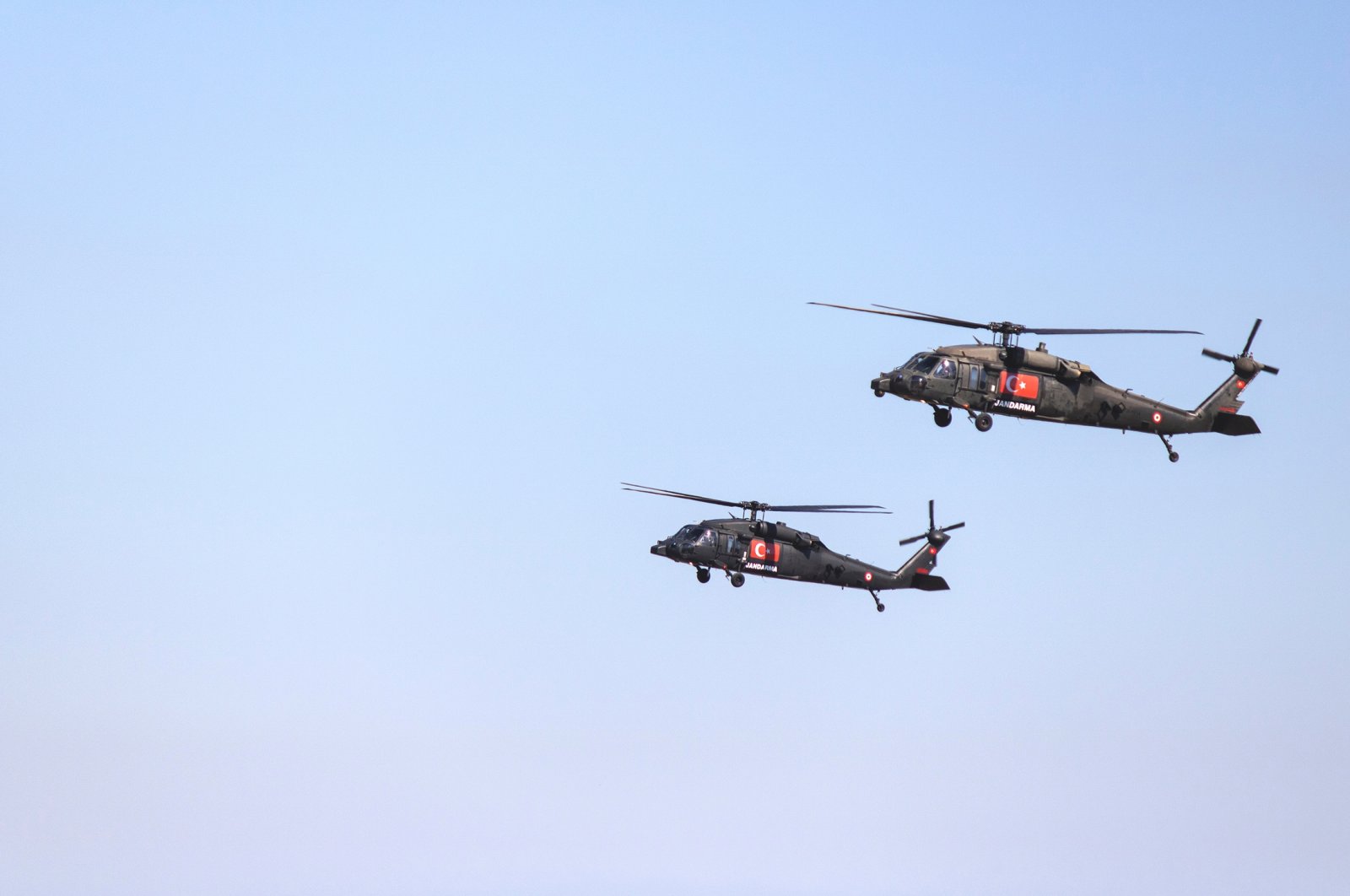 A Sikorsky S-70A-28 and a Blackhawk helicopter belonging to the Gendarmerie General Command are seen in the air during Teknofest, Istanbul, Turkey, on Sept. 18, 2019. (Shutterstock Photo)
by DAILY SABAH WITH AA Aug 10, 2021 2:50 pm
Edited By Ayşe Betül Bal
RECOMMENDED

Turkish defense industry company Meteksan Defense has developed a laser-based obstacle warning system for helicopters, which will be displayed for the first time at the upcoming 15th International Defense Fair (IDEF 2021) to be held August 17-20 in Istanbul.

The Helicopter Obstacle Detection System (HETS) was developed as part of an agreement between Meteksan and the Presidency of Defense Industries (SSB) inked in 2019.

Meteksan vice general manager Özgür Cankara, in an interview with Anadolu Agency (AA) Tuesday, said that there are many obstacles that threaten the safe course of helicopters, especially when they are flying at low altitudes.

Stating that these obstacles can be summarized as high voltage power lines, meteorological conditions or artificial and natural obstacles, Cankara noted that “unfortunately, due to these obstacles, at least two helicopters are in danger of serious accidents every week around the world.”

Similar reasons have caused nearly 40 accidents in Turkey since 1990, with some resulting in soldiers being martyred.

Emphasizing that the aviation industry has been working intensively on systems that can detect and show obstacles in a timely manner to the pilot, Cankara said there are two types of recognition system.

The passive obstacle recognition systems which are currently used in Turkey’s helicopters and the active obstacle detection system that the Turkish Armed Forces (TSK) currently lacks.

In the first system, the geographical positions of the elements that present a danger to the helicopters are marked on the map, and they are displayed to the pilot when they are in motion. The latter, meanwhile, is particularly useful when a helicopter is flying in geographies that pilots are not familiar with.

“When the related problems arise, the helicopter detects the objects around it with its own sensors and can show them to the pilot in real-time,” Cankara explained.

He went on to say that, as Meteksan Defense, they are carrying out this project to fill the gap left by the TSK helicopters’ lacking an active detection system.

Pointing out that laser technologies provide a significant advantage in obstacle detection, Cankara stated that objects that pose an obstacle for the helicopters but are too small to be seen with the naked eye, radar or camera, can be detected with laser technology.

Stating that they gave priority to the detection of electric powerlines in the project, Cankara said: "Electric powerlines and high voltage lines are very comfortably seen when viewed from below, but as helicopters rise above the ground, they cannot be observed very easily by pilots due to both the perspective and the effects of daylight. We have also developed an active obstacle detection system that can allow safe navigation in bad weather conditions such as in rain and fog."

Explaining that the system primarily emits laser beams and collects the reflections from the surrounding objects, Cankara said that these reflections determine the distance, direction and height of the objects.

The company official said their system could detect obstacles in the environment from approximately 1,500 meters (4,921 feet) with these systems and powerlines from 900 meters.

“Since HETS does not need a map, it can also be used outside the country’s borders,” he added.

The laser source the company’s system use does not harm the human eye, the environment and natural conditions.

The flight tests with HETS will start next month with the Turkish Land Forces Command’s helicopters.

"The system will primarily be used in Sikorsky helicopters, but it has been developed in a way that it can be integrated into all helicopters in the TSK inventory,” Cankara said.

He meanwhile added that the company aims to be an important player in the world not only in the military sector but also in the civilian sector with its product, such as in firefighting missions that requires helicopters to fly at low altitudes.