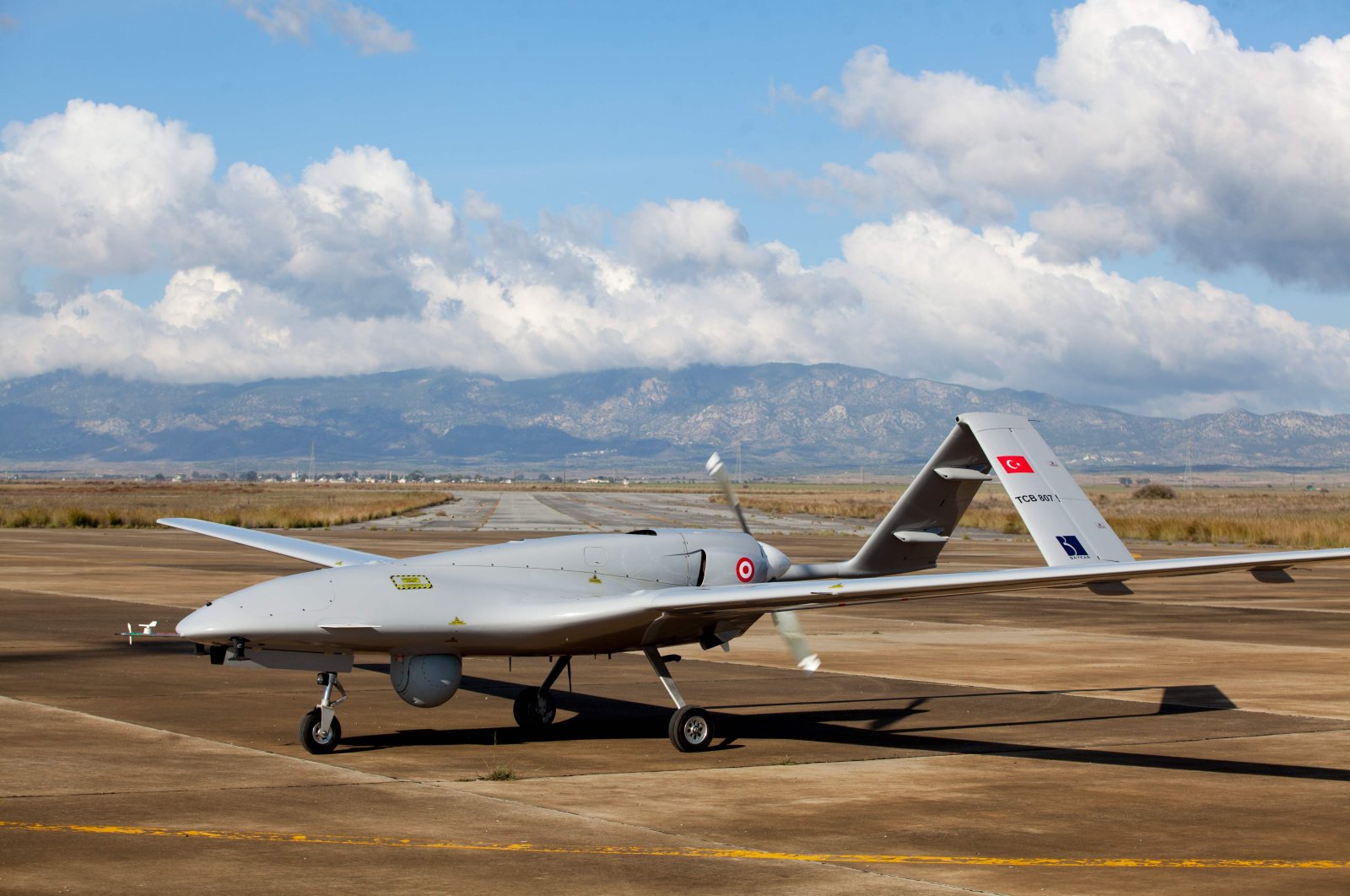 A Bayraktar TB2 drone is pictured at the Geçitkale military air base near Gazimağusa (Famagusta) in the Turkish Republic of Northern Cyprus (TRNC), Dec. 16, 2019. (AFP Photo)
by DAILY SABAH Oct 06, 2020 11:54 am
Edited By Ayşe Betül Bal
RECOMMENDED

Kyiv plans to purchase up to 48 Bayraktar Tactical Block 2 (TB2) unmanned aerial vehicles (UAVs), Turkey’s domestically made combat drones, a Ukrainian news site reported, citing the export and import body operating under Ukraine’s defense industry umbrella institution. The purchase of such a large number of UAVs raises questions of whether the vehicles would be jointly produced or produced locally inside Ukraine.

The Ukrainian Defense Ministry plans to purchase six to 12 Bayraktar TB2 complexes, each with six to 12 control stations, and three to four UAVs, Defense Express said in a report late Monday.

Vadym Nozdri, the CEO of Ukrspetsexport, which is responsible for the export and import of military equipment as it operates under the Ukroboronprom, was cited by the report as saying, “Ukraine plans to get 48 drones, which the Ministry of Defense plans to put into service in the Armed Forces.”

Ukroboronprom is the umbrella management organization of defense industry companies established as a separate state enterprise in the country.

The report pointed out that since this is a fairly large purchase, there may be possibilities for the localization of production in Ukraine.

This is a reasonable possibility considering the high number of UAVs in the order. The Turkish Armed Forces (TSK) itself currently has 107 such drones in its inventory.

Additionally, in line with the accelerating cooperation between Kyiv and Ankara and as part of the mutual visits by high-level officials from both countries, the defense industry has always been at the forefront of the cooperation. Turkish drone magnate Baykar Makina, owner of the Bayraktar TB2 drones that have been dubbed game-changers since the TSK’s first use of them on the field, would be no exception to such cooperation.

The head of Ukrspetsexport was cited in the report as saying, “Baykar Makina is ready to invest in Ukraine and develop joint projects.”

"This is a joint production, large-scale assembly on the territory of Ukraine,” Nozdri said, emphasizing that the localization of the production would also “reduce the cost of each complex by up to 35%.”

He said that they are now testing the already purchased drone’s resistance to more severe climatic conditions which will be a determining factor in additional purchases.

"The further sale of Bayraktar TB2 by Turkey directly depends on the results of this experimental operation," Nozdri stressed.

The agreement stated six Bayraktar TB2s would be delivered to Ukraine within a year, and three ground control station systems and equipment were also delivered to the country in the following period.

The Turkish reconnaissance and strike drones completed acceptance tests in Ukraine in November 2019.