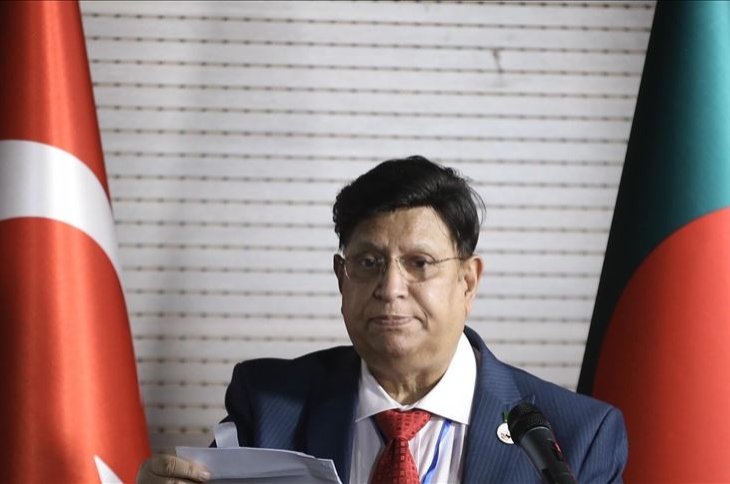 Economy and trade will be the key focus of bilateral relations between Turkey and Bangladesh, said Bangladesh's top diplomat during a visit to Turkey Thursday.

In an exclusive interview with Anadolu Agency (AA) in Ankara during his four-day visit to Turkey, Bangladeshi Foreign Minister AK Abdul Momen referred to his country as a land of opportunity in terms of investment.

"If you invest in anything, produce anything, there is a big market for it. Not just for its 165 million population, but also for the neighboring countries with whom Bangladesh shares very good relationships," he said.

He noted that Turkey is doing very well in terms of its economy and Bangladesh is also doing very well in terms of economic growth and stability. "In fact, in the area of economic growth, we have become a model for developing countries. It's overall development, not only in the per capita income. The GDP (gross domestic product) is increasing. Also the standard of living and life expectancy, everything has gone up. Life expectancy has gone up from 62 years to 74 now," he said.

Momen added that while "Turkey mostly engaged in doing businesses with the Europeans and Russians" in the past, now the country is "looking farther."

The two countries have developed a trade link, he said. "Since our political relationship is very solid, our business relationship will shoot up."

"Currently, we have around $1 billion in business. President (Recep Tayyip) Erdoğan wants it to go up to $3 billion. So, we are looking forward to it," Momen said.

He stressed that Bangladesh has approached Turkey for, not a free trade agreement, but a proficient trade agreement (PTA), which may come into being in the future, as "the trade volume should be much more."