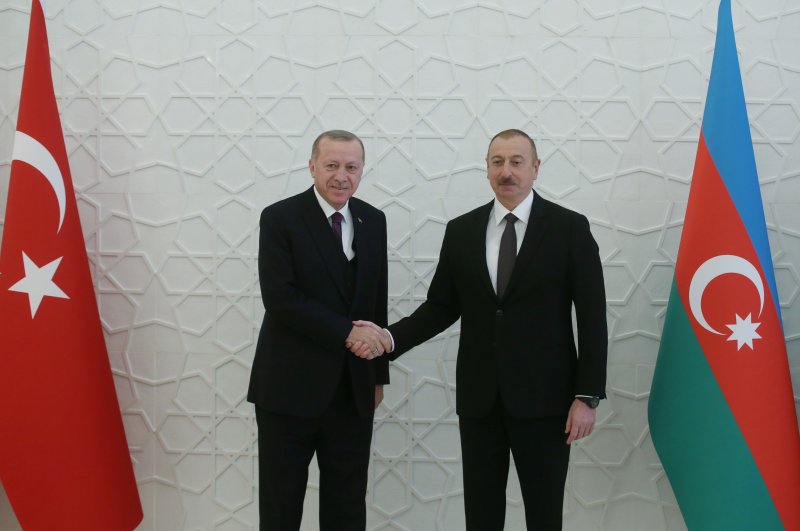 Turkey and Azerbaijan agreed to maximize efforts to bring their trade volume to the $15 billion trade volume target, a goal that will be facilitated with a preferential trade agreement that the two states inked Tuesday.

“The target is to bring our trade volume to $15 billion by 2023,” President Recep Tayyip Erdoğan said at a joint press conference with his Azerbaijani counterpart İlham Aliyev in the capital Baku, where Erdoğan was on a daylong official visit.

“We have taken very important steps for the future in our meetings today. We have been and are living in solidarity with Azerbaijan. Political solidarity continues at the highest level... We will endeavor to take this even further,” Erdoğan said.

His remarks came after the eighth meeting of the Turkey-Azerbaijan High-Level Strategic Cooperation Council, which he co-chaired with Aliyev.

For his part, Aliyev dubbed 2019 as a successful year for the two countries’ relations, indicating that important progress was made in many areas, particularly energy and transportation.

Prior to the meeting, the two leaders held one-on-one talks during which they discussed steps to further develop bilateral relations.

The expected mutual customs exemption and discount on 15 different products stood out among the deals signed as part of the preferential trade agreement, which will accelerate the development of trade relations between the two countries.

The two countries signed 14 memorandums and agreements, including on trade, defense and sports.

An action plan for cooperation between Turkey's Foreign Economic Relations Board (DEİK) and the Azerbaijan Export and Investment Promotion Fund (AZPROMO) was also signed.

The trade volume between the two countries has been following a steady upward trend over recent years. It amounted to some $1.57 billion in 2016, increased to $1.71 billion in 2017, before reaching around $1.85 billion in 2018, according to the Turkish Statistical Institute (TurkStat) data. It exceeded $2 billion last year, of which Turkey’s exports totaled $1.64 billion and imports reached nearly $395 million.

With the aim of further strengthening bilateral relations, the cooperation council mechanism was established in 2010 at the presidential level. Trilateral and quadrilateral mechanisms established with Azerbaijan are considered important mechanisms promoting regional stability, peace and prosperity.

The mechanisms have enabled the two countries to implement a number of significant transportation and energy projects such as the Baku-Tbilisi-Kars railway line, which passes through Georgia to connect the two countries, and the Trans Anatolian Natural Gas Pipeline Project (TANAP), which transports Caspian gas through Turkey and onward to Europe.

TANAP, one of the biggest energy projects in the region, was launched in June 2018. It stretches from the Turkish-Georgian border to the Turkish-Greek border to deliver 6 billion cubic meters of Azerbaijani gas to Turkey and 10 billion to Europe per year. The pipeline passes through 20 provinces and 67 districts of Turkey.

On Nov. 30 last year, the Turkish and Azerbaijani presidents inaugurated the project's European link in the northwestern province of Edirne, near the border with Greece.

Erdoğan also announced the two countries have agreed to establish a railway project between Turkey and the Nakhchivan Autonomous Republic of Azerbaijan and establish a natural gas pipeline up until the borders of Nakhchivan.

The president said infrastructure work would be initiated very soon.

The Nakhchivan Autonomous Republic is an exclave of Azerbaijan bordering Armenia, Turkey and Iran.

As of 2019, Azerbaijan’s investments in Turkey have reached $17 billion, while Turkey’s investments amounted to over $12 billion.

State Oil Company of Azerbaijan Republic (SOCAR) stands as one of the largest foreign direct investors in Turkey, as its investment will reach up to $19.5 billion once all its ongoing projects have completed.

Its $6.3 billion STAR Refinery, located in the Aliağa peninsula in the Aegean province of İzmir was launched on Oct. 19, 2018. It stands as the largest investment made by a foreign direct investor in the country.

SOCAR plans another petrochemical facility investment in İzmir in partnership with British Petroleum (BP) with an estimated cost of $1.8 billion.