Another 5.2M jobless claims filed in US, bringing total to 22M in world’s largest economy 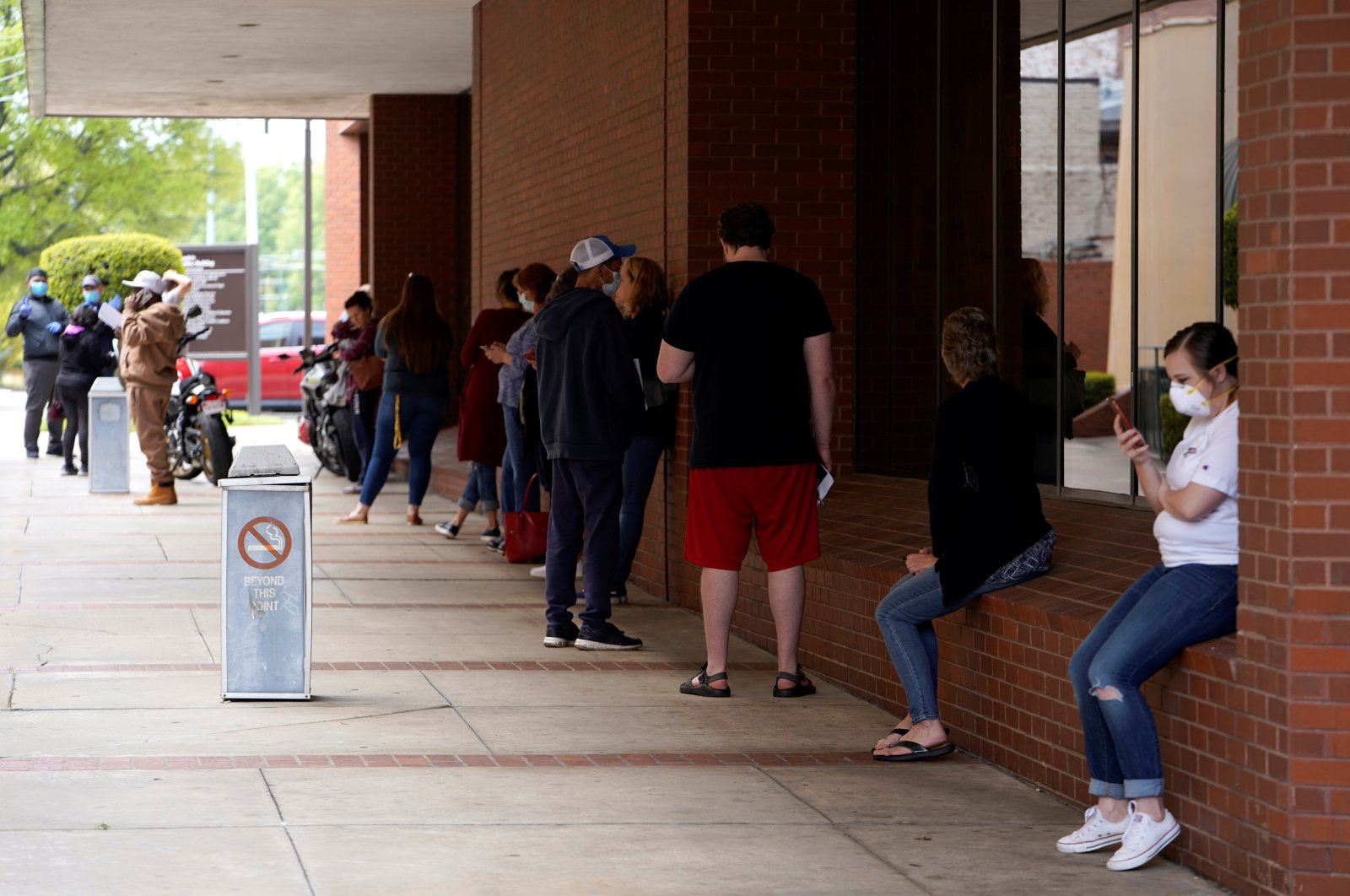 People who lost their jobs wait in line to file for unemployment following an outbreak of the coronavirus, at an Arkansas Workforce Center in Fort Smith, Arkansas, U.S., April 6, 2020. (Reuters Photo)
by Compiled from Wire Services Apr 16, 2020 1:26 pm
Edited By Ayşe Betül Bal
RECOMMENDED

The wave of layoffs that has engulfed the U.S. economy since the coronavirus struck forced 5.2 million more people to seek unemployment benefits last week.

Roughly 22 million have sought unemployment benefits in the past month – easily the worst stretch of U.S. job losses on record.

All businesses deemed nonessential have been closed in nearly every state as the economy has virtually shut down. Deep job losses have been inflicted across nearly every industry. Some economists say the unemployment rate could reach as high as 20% in April, which would be the highest rate since the Great Depression of the 1930s. In comparison, unemployment never topped 10% during the Great Recession.

Thursday’s data on weekly jobless claims in the U.S. follows dismal data Wednesday showing a record drop in retail sales in March and the biggest decline in factory output since 1946.

Economists are estimating the economy contracted as much as 10.8% in the first quarter, which would be the steepest drop in gross domestic product since 1947. They say a historic $2.3 trillion fiscal package, which made provisions for cash payments to some families and boosted unemployment benefit checks, will likely provide little cushion to the economy.

America's weekly jobless claims, the most timely data on the economy's health, are being closely watched for clues on the depth of the downturn, when the waves of layoffs may let up and when a recovery might start.

"The decline in economic activity is breathtaking," said Joel Naroff, chief economist at Naroff Economics in Holland, Pennsylvania. "While we will see an initial upturn once the economy reopens, the strength and length of that recovery is not clear at all."

A Reuters survey expected the initial claims for state unemployment benefits to total 5.1 million in the week ending April 11, a staggering number even though its lower than the previous week's 6.6 million. Estimates in the survey were as high as 8 million.

Going by the average forecast, last week's data would bring the cumulative unemployment benefits claims to more than 20 million since the week ending March 21.

Economists are divided on whether the anticipated second straight weekly decline in claims suggests that filings peaked at a record 6.8 million in the week ending March 28, or that overwhelmed state employment offices were unable to process the flood of applications.

"We expect that claims will remain very elevated in coming weeks as states struggle to clear backlogs and more companies lay off workers in response to the shutdown," said Joseph Briggs, an economist at Goldman Sachs in New York.

"Including this week, we currently project an additional 20 million in initial jobless claims through the end of May, after which we expect new claims to fall to levels consistent with prior recessions," he said.

"The speed and scale of job losses will be more similar to a natural disaster than a typical recession," said Dante DeAntonio, an economist at Moody's Analytics in West Chester, Pennsylvania. "Overall job losses in April could be 10 to 20 times larger than those in March."

The so-called continuing claims data is reported with a one-week lag and is viewed as a better gauge of unemployment.

States and local governments have issued "stay-at-home" or "shelter-in-place" orders affecting more than 90% of Americans to control the spread of COVID-19, the respiratory illness caused by the virus, and abruptly halting economic activity.

The Federal Reserve reported Wednesday that manufacturing output dropped 6.3% last month, led by plunging production at auto factories that have entirely shut down. Overall, industrial production, which includes factories, utilities and mines, plummeted 5.4%. The declines are the biggest since 1946 and far worse than what economists had expected. Auto production went into freefall, dropping 27.2%.

Retail sales suffered a record drop in the month as mandatory business closures to control the spread of the outbreak depressed demand for a range of goods, setting up consumer spending for its worst decline in decades.

The Commerce Department on Wednesday said retail sales plunged 8.7% in March, the biggest decline since the government started tracking the series in 1992, after falling by a revised 0.4% in February.

Economists also project a record-shattering 40% annual decline in U.S. economic output for the April-June quarter. While growth is expected to rebound in the second half of the year, economists at JPMorgan Chase have forecast that the U.S. economy will still shrink 7% for 2020 as a whole.

The slowdown will be global. The International Monetary Fund (IMF) on Tuesday predicted that the world economy would shrink 3% this year, the worst outcome since the Great Depression.

The National Bureau of Economic Research, the private research institute regarded as the arbiter of U.S. recessions, does not define a recession as two consecutive quarters of decline in real GDP, as is the rule of thumb in many countries. Instead, it looks for a drop in activity, spread across the economy and lasting more than a few months.