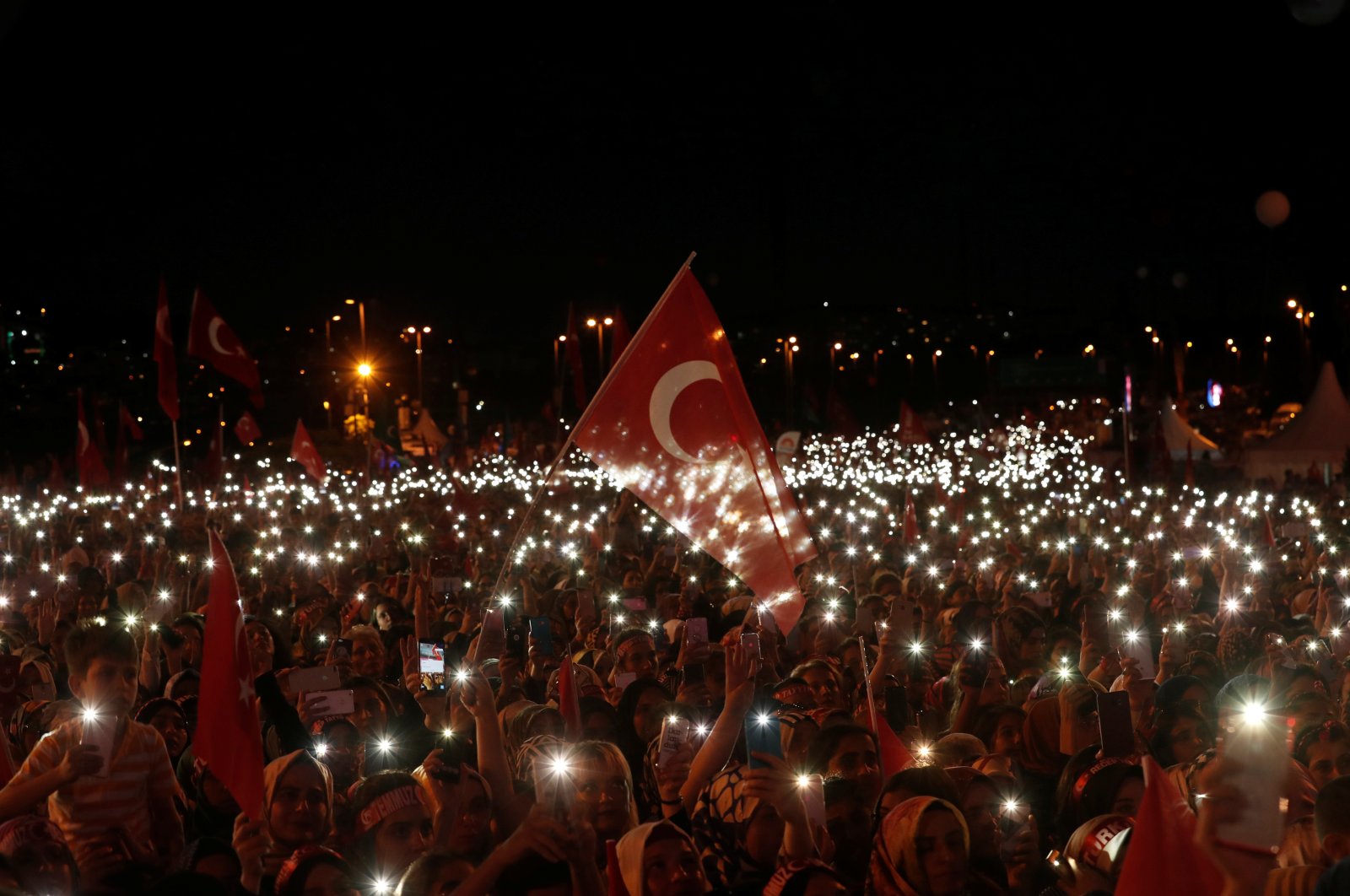 Four years have passed since the Turkish nation stood up in the face of the heinous and deadly July 15 failed coup attempt perpetrated by the Gülenist Terror Group (FETÖ). This exemplary show of unity and solidarity of the Turkish people thwarted the coup attempt that targeted the country's democratic order and political and economic stability and threatened economic collapse. Turkey, with all its elements, including the business world, is committed to democratic, constitutional order and the rule of law.

Making statements commemorating the fourth anniversary of the coup attempt, representatives of the business world highlighted the Turkish nation’s strong resolve in defending the country’s democratic order on the night of the failed coup attempt, emphasizing their commitment to work to move forward stronger than ever.

On the night of the failed coup on July 15, 2016, 251 citizens, including elderly citizens, women and young people, who poured on the streets unarmed and with the sole aim of standing by the country’s legitimate democratic order, were killed by FETÖ terrorists. Nearly 2,200 others were injured.

Head of the Association of Real Estate Investment Companies (GYODER) Mehmet Kalyoncu said that the Turkish nation, resisting the coup attempt with great determination, once again showed that it is the protector of democracy. Turkey is a strong country believing in the rule of law and democracy, he added.

Kalyoncu recalled that following the treacherous coup attempt during which even the Grand National Assembly of Turkey (TBMM) was bombed, the GYODER immediately acted to repair the building that represents Turkish democracy.

As part of a signed protocol with GYODER, which was headed by Aziz Torun in 2016, a consortium consisting of member firms completed the repair in 2017.

Kalyoncu said that their main duty is to contribute to the development of the country, noting that as the umbrella organization for Turkey's real estate sector, they will continue to create value for the national economy.

“Real estate is one of the locomotives of Turkey's economy and a major industry that directly affects about 200 subsectors. We aim to contribute to the development of this large sector and to have a much stronger economy in our country,” Kalyoncu said.

Confidence given to markets

Turkish Industrialists' and Businessmen's Association (TÜSIAD) Chairman Simone Kaslowski, speaking to Anadolu Agency (AA), said that all segments of the country, including the political parties and the society being in the forefront, have taken a united stand against the coup attempt that targeted the country’s democratic order on July 15.

Stating that this common stance reveals the belief of the society in democracy and its sensitivity to the interventions against it, Kaslowski stated that after the brutal attempt against democracy, confidence was restored in the markets through the initiatives and measures taken by the supervisory and regulatory institutions, the government and the central bank, which were the leading actors in this regard.

"The uncertainty that emerged in the short period when security concerns came to the fore had an impact on the real sector. In the second half of 2016, a significant slowdown was felt. However, our economy managed to grow by over 7% in 2017 thanks to the large number of loans extended through the Credit Guarantee Fund," Kaslowski said.

“Unfortunately, our growth rate has been below the historical averages for the last three years, and the vulnerabilities caused by increasing macroeconomic imbalances have triggered crises,” he said, noting that in the upcoming period, “we can eliminate our long-lasting vulnerabilities with sustainable policies, and catch up the trends on the digitalized world faster and focus on technological development if we can make the necessary reforms in tax, education and labor markets to overcome the problem of efficiency in the economy.”

Ismail Gülle, Turkey Exporters’ Assembly (TIM) chairman, said that the July 15 coup attempt was the bloodiest and most brutal attempt to target Turkey’s unity, solidarity and political and economic stability.

“Turkey is now making great momentum in exports of technology, particularly in the aerospace and defense, and is now not only a country that is using such technologies but also a country that produces, modernizes and exports them. More active participation in the economic management was initiated through the business world and nongovernmental organizations (NGOs) that united on July 15, and the mental, institutional and sectoral transformation based on the market economy has started to be carried successfully,” Gülle said.

Istanbul Chamber of Commerce (ITO) Head Şekib Avdagiç said the business world has fulfilled its duties diligently to prevent losses in the economy in the past four years.

The country then grew by 2.8% in 2018 and by 0.9% in 2019, during which Aydagiç said the country’s economy was again under the target, noting: "these figures show us that if the country was able to maintain the growth trend in 2016 without having to deal with the abusive FETÖ coup plotters and try to eliminate their effects ... our current growth performance for those years would have been much higher. Likewise, the economic developments in the following years would have been better than what has happened.”

Turkish Foreign Economic Relations Board (DEIK) Chairman Nail Olpak said that the July 15 coup attempt had an impact on the country’s economy. “We have, most specifically, fought against a structure that is trying to harm Turkey's perception abroad with speculations and manipulative news. They tried to disrupt the development of our country and economic stability. During the black propaganda, a sequel followed that period in which our tourism revenues decreased for a while, our CDS premiums rose and even some international rating agencies unfairly lowered our country's credit ratings,” Olpak said.

Pointing out that the coup attempt did not have a serious impact on the real sector, Olpak said, however, that it had relatively negative impacts in terms of financial markets through capital outflows and rising borrowing costs.

“Our state, as well as our Turkish business world, had never entered a slowing down period neither in terms of investment nor in production in line with our 2023 targets. We emerged stronger even during 2018, which saw the exchange mobility that was not overlapping the macroeconomic realities of our country. We reached the highest foreign trade figures of the Turkish Republic in 2018 and 2019,” he said.

“Turkey, in such a way that no other country has managed, heals its wounds and is going through a rapid recovery. Thanks to our experience in the face of crises and our proactive structure that quickly adapts to the process, our country has been on its way with positive growth every year for the last 10 years. We are confident that our country, which is among the 20 largest economies in the world, will continue its rise in global trade, especially in the 'new normal' period," Olpak said.

Independent Industrialists and Businessmen's Association (MÜSIAD) Chairman Abdurrahman Kaan said in a written statement that they condemn the July 15 coup attempt with a rage that is as strong as it was during the attempt, despite the time that has passed, saying that the attack was recorded in the Turkish republic’s history as a incident of treachery and cruelty.

The Turkish nation has shown a rare example of defending democracy, the homeland and the state at the cost of citizens' lives, he said.

“On the night of July 15, our valuable nation, with youth, elderly, women and men, thinking nothing of their own lives, put the defense of the country before everything and went to the streets, not allowing the coup plotters to succeed. This determination and love of homeland, which has ruined FETÖ's treacherous ambitions, is the biggest guarantee that (FETÖ) will not have the courage to do such a thing in this land again,” the statement read.

Kaan said that the FETÖ terrorists that had infiltrated various levels of the state, especially the Turkish Armed Forces (TSK), were cleared out in operations that the state has meticulously carried out ever since.

“We witness that the struggle of our state in this regard has been continuing resolutely from the first day without any disruption,” he noted.

The head of MÜSIAD, one of the most prominent NGOs both in Turkey and abroad, said that the association, which announced its stance with the state and the nation against the heinous attack on the night of the failed coup attempt, has also been working to explain the nation's struggle to the world, along with addressing misconceptions and showing the true face of FETÖ, not just within its 89 branches in Turkey but also in 225 branch offices and representative offices in 95 countries.

“As MÜSIAD, with the awareness that democracy is the lifeblood of the country, we are still in this struggle for democracy under all circumstances, as we were in the past. We will never allow our country, which was established with the blood of our martyrs, with the sacrifice of our veterans, to be threatened by terrorist organizations and to be included in treacherous plans by foreign conspirators,” Kaan said in the statement, commemorating July 15 martyrs whom "they will never forget or allow them to be forgotten.”

Turkey Building Material Producers Association (Turkey IMSAD) Chairman Tayfun Küçükoğlu also releasing a statement to commemorate the martyrs on the fourth anniversary of the failed coup attempt, saying that July 15 showed the whole world that Turkey will always be a free, democratic country.

“July 15, when all parts of our country gave a good account of themselves by protecting our republic and democracy, became one of the turning points of our recent history. Today, on the fourth anniversary of July 15, we once again commemorate our martyrs of democracy, who lost their lives while fighting against the coup attempt, and offer our gratitude to our heroic veterans,” Küçükoğlu said.

Küçükoğlu stressed that, as the manufacturers of building materials, they are committed to produce more and grow in the global market to contribute to a strong economy and more prosperous Turkey.