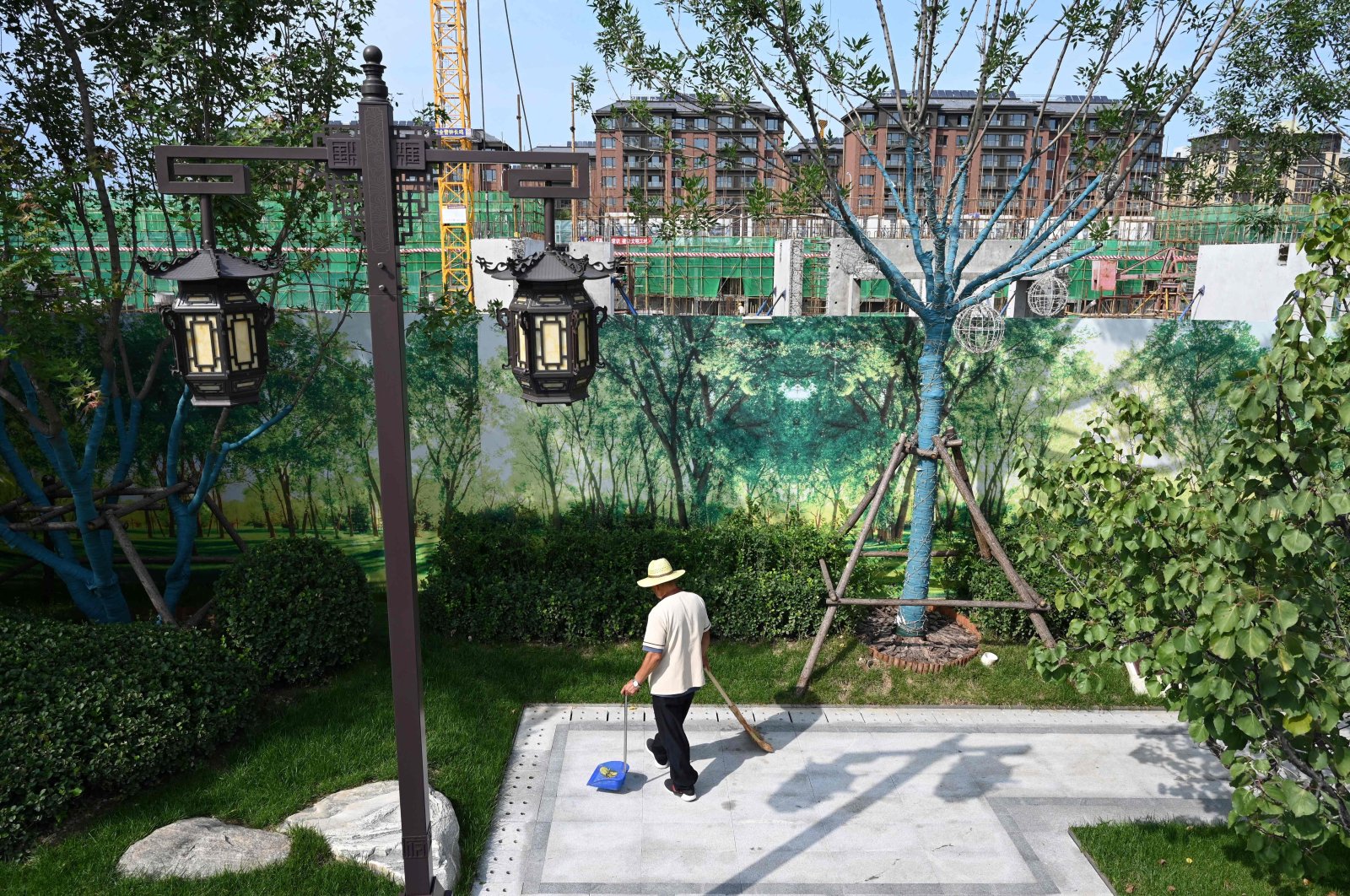 A worker cleans a display area next to the construction site of an Evergrande housing complex in Beijing, China, Sept. 13, 2021. (AFP Photo)
by French Press Agency - AFP Sep 14, 2021 9:49 am
RECOMMENDED

Sleepless nights are now routine for Ji Wenchen six months after she laid out $100,000 for a deposit on a new apartment that is yet to be completed by China’s rattled property giant Evergrande.

She handed over the cash to the sprawling conglomerate in March but is yet to receive documents showing she owns the apartment.

"I can barely eat or sleep these days," the 30-year-old told the Agence France-Presse (AFP).

"My name has not been written on the apartment – that means, Evergrande has not handed over my money to the local government. As a rule, it should be filed within one month."

Ji is one of tens of thousands of ordinary investors, whose financial futures are pegged to promised windfalls from Evergrande, China's largest developer whose bullish expansion into 280 cities was driven by a $300 billion debt binge that has left it teetering.

Analysts Capital Economics estimate Evergrande has some 1.4 million properties that it has committed to complete – around 1.3 trillion yuan ($200 million) in pre-sale liabilities, as of the end of June.

But those developments and debt repayments have been cast into doubt as it has struggled to sell properties, meaning it does not have the cash to complete other projects to then sell.

It has also failed to offload assets including its Hong Kong headquarters as well as units including China Evergrande New Energy Vehicle Group.

On Tuesday the company filed a statement to the Hong Kong exchange warning of the "tremendous pressure" it faces.

"There is no guarantee that the Group will be able to meet its financial obligations," the statement said, as the property giant sags under its colossal debts.

The housing group, which rode the investment wave of the 90s to capitalize on the country's wealth boom, is now struggling to meet metrics imposed by Beijing last year.

Many offered attractive incentives to homebuyers to shift new-build properties.

One wrote that he had bought an apartment in a block in southwestern Kunming that was supposed to be completed in August, but the building is still not finished and the construction site is empty.

Several hundred buyers marched on the Evergrande offices in southern Shenzhen last month, according to pictures posted on Twitter-like Weibo, demanding money back from the embattled developer.

"I'm worried about my apartment – it was supposed to delivered before Oct. 31 according to the contract," Kevin, a buyer in Jiozuo, central Henan province, told AFP.

"But I asked Evergrande a few days ago, and they said it may be delayed because they don't have enough workers. I don't have any other choice but just to wait."

Owning property has become an important social marker of wealth in China, and often considered a requirement for a man before getting married.

But stabilizing the market has become a key aim of Chinese President Xi Jinping, under the motto of "housing is for living, not for speculation."

The sector is of vital importance to the economy – accounting for more than a quarter of it – and with millions of families tying up their wealth in property ownership experts have warned of potentially dire consequences if house prices drop below the cost of mortgages.

But the credit squeeze in the property sector is "unnecessarily aggressive" and may weigh on industrial demand and consumption, experts at Bank of America Corp warned Bloomberg.

Evergrande's woes come as authorities crackdown on a range of corporate giants, including many listed home-grown conglomerates, sending shivers through stock markets as investors lose confidence in China's private sector.

Meanwhile, some analysts warned the government has little incentive to rescue Evergrande, particularly as Beijing tightens up on what it sees as excessive wealth and runaway spending.

Capital Economics predicted that, in the event the group implodes, Beijing would prioritize buyers like Ji to prevent the economic blow morphing into social anger.

But it means anxious days lie ahead for buyers who have piled life savings into new apartments.

Ji is just hoping to get the money back – a downpayment gifted from her parents to help her onto the property ladder, in eastern Jiangxi province – but fears it will be difficult.

"When I bought this apartment I believed Evergrande," she said.