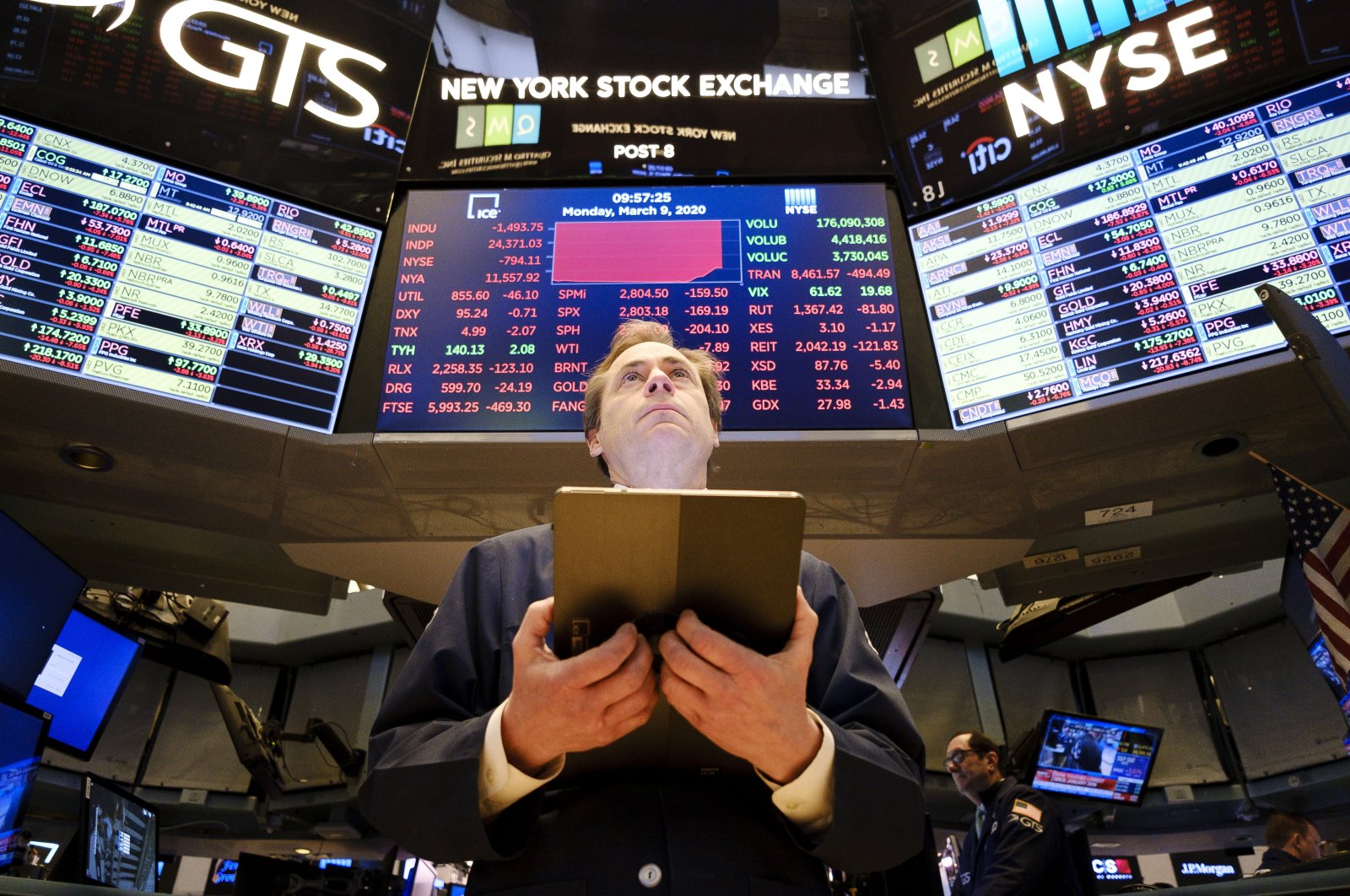 The Dow Jones Industrial Average sank 7.8%, its steepest drop since the financial crisis of 2008, as a free-fall in oil prices and worsening fears of fallout from the spreading coronavirus outbreak seize markets.

The sharp drops triggered the first automatic halts in trading in two decades. The price of oil plunged nearly 25% after Saudi Arabia indicated it would ramp up production after Russia refused to production cutbacks in response to falling demand. Europe fell into a bear market. U.S. stocks are now down 19% from the peak they reached last month. Bond yields plumbed new lows as investors sought safety.

Coronavirus fears and a crash in oil prices sent a shudder through financial markets Monday, with stocks plummeting so fast on Wall Street that they triggered the first automatic halt in trading in over two decades.

The Dow Jones Industrial Average plunged more than 2,000 points at one point during the day, or nearly 8%, and European markets entered a bear market, registering their heaviest losses since the darkest days of the 2008 meltdown, as the damage mounted from the crisis that has closed factories, schools and stores and led to travel bans and unprecedented quarantines.

"The market has had a crisis of confidence,” said Willie Delwiche, investment strategist at Baird.

The market slide came as Italy, the hardest-hit place in Europe, began enforcing a lockdown against 16 million people in the north, or one-quarter of the country's population, with masked police officers and soldiers checking travelers' documents amid restrictions that affected such daily activities as enjoying an espresso at a cafe or running to the grocery store. The turmoil is expected to push Italy into recession and weigh on the European economy.

In the U.S., a cruise ship with a cluster of coronavirus cases that forced it to idle off the California coast for days arrived at the port of Oakland as officials prepared to start bringing passengers to military bases for quarantine or get them back to their home countries. The Grand Princess had more than 3,500 people aboard – 21 of them infected with the virus.

The escalating health crisis combined with another, intertwined development - plummeting oil prices - to drag down the market: The price of oil sank nearly 20% after Russia refused to roll back production in response to virus-depressed demand and Saudi Arabia signaled it will ramp up its own output.

While low oil prices can translate into cheaper gasoline, they wreak havoc on energy companies and countries that count on petroleum revenue, including the No. 1 producer, the U.S.

On Wall Street, the S&P 500 plunged 7.4% in the first few minutes after the opening bell before trading was halted by the market's circuit breakers, first adopted after the crash of October 1987 and modified over the years to give investors a chance to catch their breath. The market-wide circuit breakers have been triggered only once before, in 1997.

U.S. stocks edged ever closer to a bear market, defined as a drop of 20% from its peak, while a gauge of fear on Wall Street reached its highest level since the 2008 global financial crisis. Italy's stock index plunged 11.2%. Britain, France and Germany were down between 7.7% and 8.4%

The interest rate, or yield, on U.S. Treasury bonds sank to all-time lows as investors looking for a safe place kept on sinking money into them, even as the return on their investment sank closer and closer to zero. The yield on the 10-year Treasury note plunged to 0.54%. Up until last week, it had never been below 1%.

The carnage in the energy sector was particularly bad. With benchmark U.S. crude dropping to under $32 a barrel, Marathon Oil, Apache Corp. and Diamondback Energy each sank more than 40%. Exxon Mobil and Chevron were on track for their worst days since 2008.

"We knew it was going to be a hot day,” said John Spensieri, head of U.S. equity trading at Stifel. He said that the mood was "organized chaos” in the morning but that the trading halt achieved what it was supposed to by stopping the slide.

The coronavirus has infected more than 110,000 people worldwide and killed around 3,900, leading to factory shutdowns, travel bans, closings of schools and stores, and cancellations of conventions and other gatherings. In the U.S., the number of people infected climbed to around 600, with at least 25 deaths - at least 19 of them associated with a single Seattle-area nursing home. While the crisis is easing in China, where the virus was first detected, fast-growing clusters have turned up in South Korea, Iran and Italy, and fears are mounting in the United States. After initially taking an optimistic view on the virus, hoping that it would remain mostly in China and cause just a short-term disruption, investors are realizing they probably underestimated the crisis badly.

Including Monday's drop, the S&P 500 has now lost 18.3% since setting a record last month. If it hits 20%, it would mean the death of what’s become the longest-running bull market for U.S. stocks in history, an 11-year run. Monday marks the 11th anniversary of the market hitting bottom after the 2008 financial crisis. Traders are increasing betting that the Federal Reserve will cut interest rates back to zero to do what it can to help the virus-weakened economy, perhaps as soon as next week.

But doubts are rising about how effective lower rates can be this time. They can encourage people and companies to borrow, but they can't restart factories, restaurants or theme parks shut down because people are quarantined.

The Fed has already cut its benchmark short-term rate to a range of 1% to 1.25%, leaving little room to cut more. "Central banks are a bit player in the current crisis,’’ Ethan Harris, global economist at Bank of America, wrote in a research report.

The clamor is growing louder for help from authorities besides central banks. "Today’s market action may bang some heads together and actually start thinking about the constructive measures the government can take,’’ said Jacob Kirkegaard, senior fellow at the Peterson Institution for International Economics. Among other things, Kirkegaard said, the government should make sure all Americans get paid sick leave and health care coverage for virus-related ills.