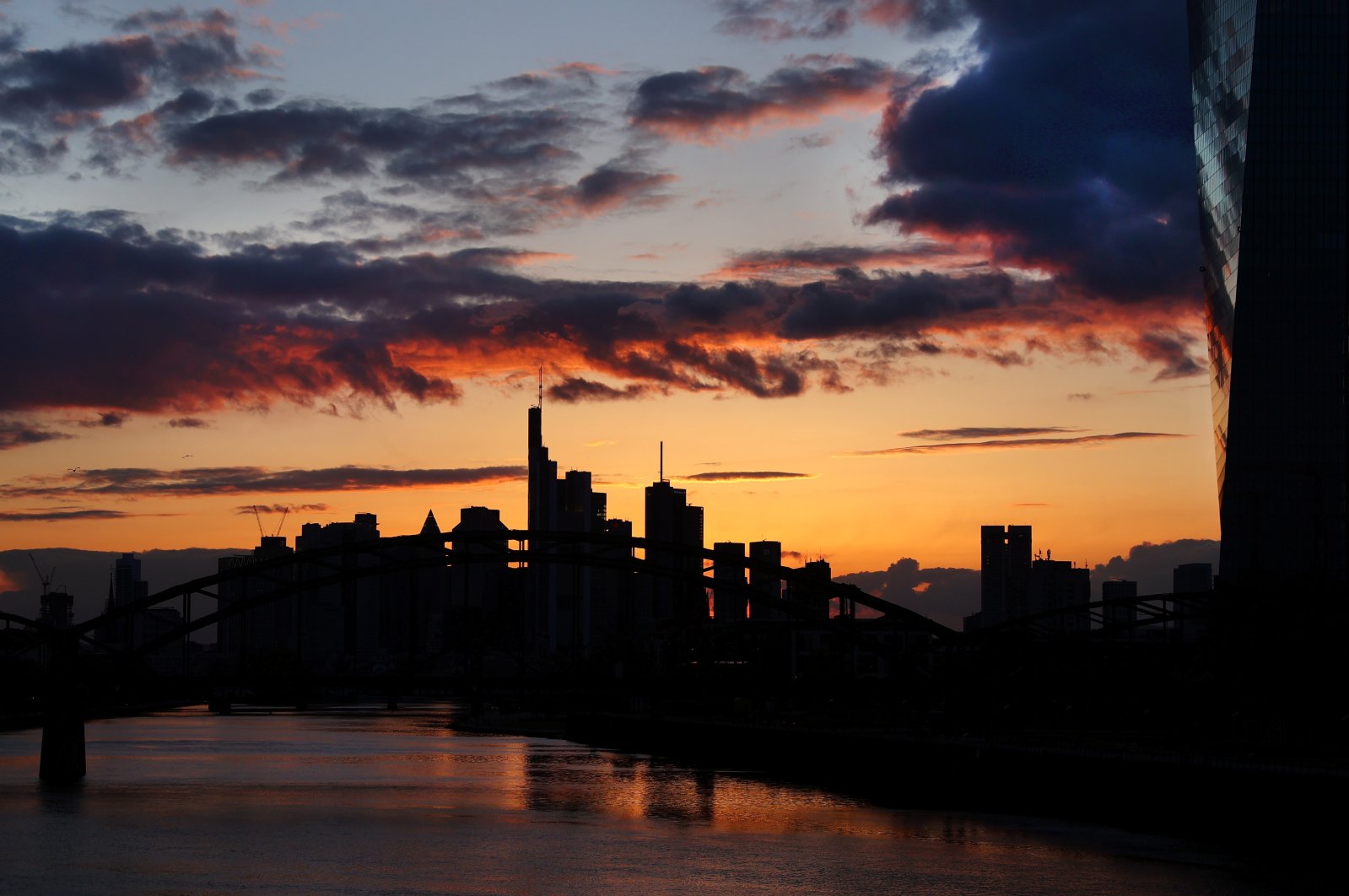 The European Central Bank (ECB) and the skyline with its financial district are seen during sunset as the spread of the coronavirus disease (COVID-19) continues in Frankfurt, Germany, April 13, 2021. (Reuters Photo)
by REUTERS Apr 22, 2021 3:28 pm
RECOMMENDED

The European Central Bank (ECB) left policy unchanged as expected on Thursday, keeping copious stimulus flowing even as it faces questions over how it might claw back support once the pandemic-stricken eurozone economy reopens.

The ECB is keeping borrowing costs pinned near record lows via massive bond purchases to see the 19-country currency bloc through a scarring recession that has kept schools, shops, restaurants and hotels closed for most of the last year.

But growth is expected to rebound quickly from mid-year as COVID-19 infections are brought under control, the pace of vaccination picks up and restrictions are removed, raising questions about just how much ECB help is still needed.

For now, the bank has maintained its pledge to increase support if needed and ECB chief Christine Lagarde is likely to argue during her 1230 GMT news conference that more time is needed before the economy wakes fully from its hibernation.

“Incoming information confirmed the joint assessment of financing conditions and the inflation outlook carried out at the March monetary policy meeting,” the ECB said in a statement.

Thursday’s decision, a foregone conclusion among ECB watchers, sets the stage for a battle at the June 10 meeting, when policymakers have to decide whether to slow bond buying, even if that means allowing borrowing costs to drift higher.

In March, policymakers agreed to step up purchases this quarter. They will revisit that decision in June, with some policymakers already calling for a reduction in the third quarter.

“The Governing Council expects purchases under the PEPP over the current quarter to continue to be conducted at a significantly higher pace than during the first months of the year,” the ECB said, repeating its guidance from March.

At the current pace, the ECB is likely to exhaust its purchase quota before the scheduled end to its Pandemic Emergency Purchase Programme next March. The June decision will thus give a crucial signal of whether the 1.85 trillion euro ($2.22 trillion) PEPP can be wound down early next year.

Dutch policymaker Klaas Knot, one of the most conservative members of the Governing Council, has already said it may be possible to start winding down purchases from June. Other policymakers have so far pushed back on that idea, saying taper talk is premature given the deadly third wave of the pandemic.

Other central banks have already started heading for the exit.

The Bank of Canada signaled on Wednesday it could start hiking interest rates in late 2022, as it sharply boosted its outlook for the Canadian economy and reduced the scope of its bond-buying program.

Even if growth is fragile and lockdowns have been extended beyond earlier expectations, there will be plenty for Lagarde to cheer about at her news conference.

The current wave of the pandemic seems to have plateaued in Europe, the pace of vaccinations is accelerating and the European Union’s 750-billion euro recovery fund has cleared a key court challenge.

Companies are showing versatility in adapting to life under lockdown and governments are adding to fiscal support measures, ensuring firms stay afloat.

All this points to a rapid recovery as immunity levels rise, which will present the ECB with a policy dilemma.

The bank has promised “favorable” financing conditions and extra bond purchases during the “emergency” phase of the pandemic. But neither of these terms has been defined, leaving investors guessing how it will react to the eventual rebound.

Once the recovery takes hold and the ECB cuts bond purchases, the key question will be just how much of a rise in eurozone government bond yields is warranted and how the central bank can avoid the impression of micromanaging yields.

With policy unchanged on Thursday, the ECB’s deposit rate remains at minus 0.5% and the main rate at 0%.