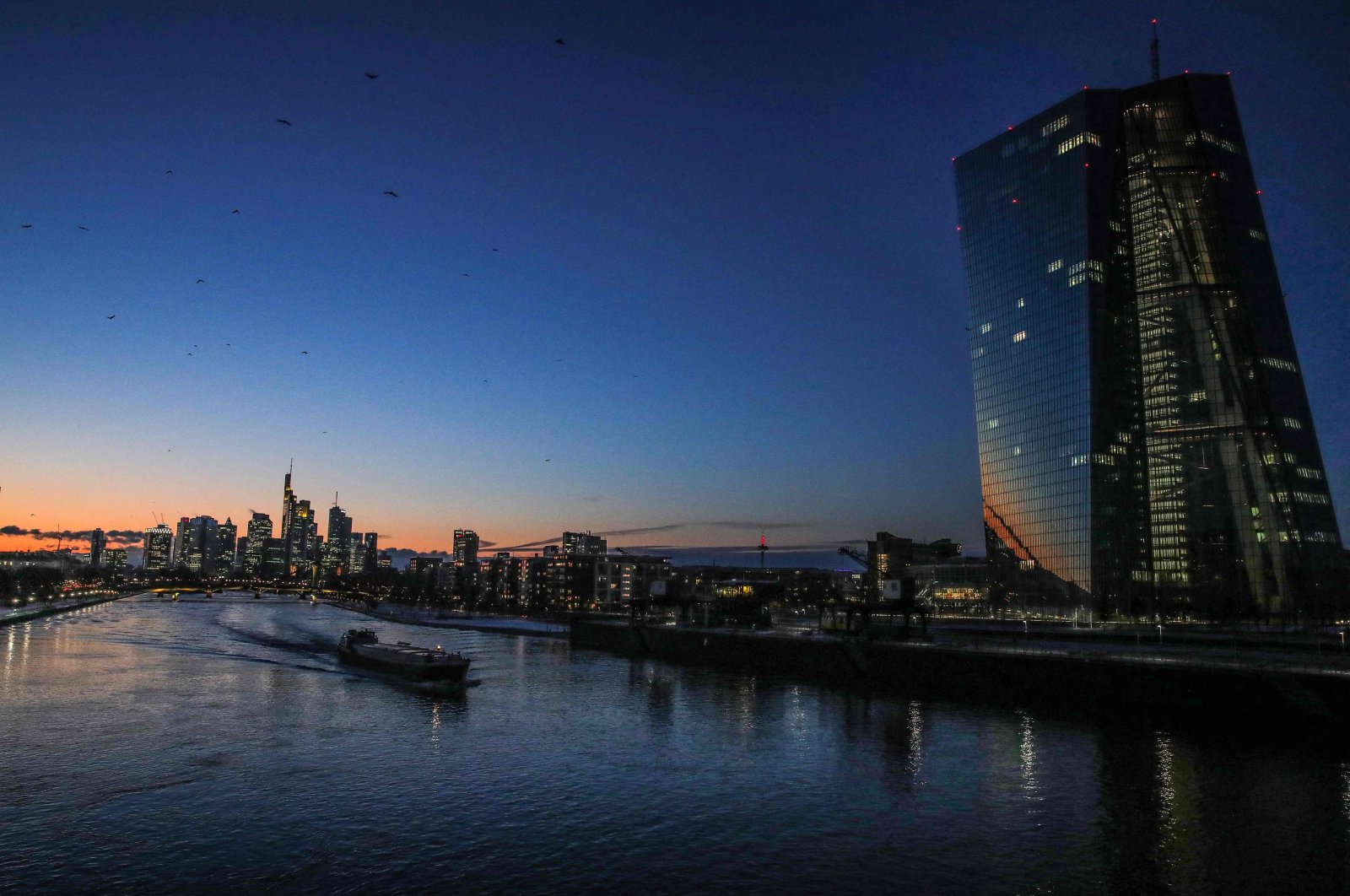 A ship makes its way on the river Main past the headquarters of the European Central Bank (R), with the banking district in Frankfurt am Main in the distance, western Germany, Feb. 10, 2021. (AFP Photo)
by REUTERS Jul 08, 2021 6:31 pm
RECOMMENDED

The European Central Bank (ECB) set a new inflation target on Thursday and carved out a major role in the fight against climate change, embarking on a fundamental transformation of Europe's most powerful financial institution.

With inflation having undershot its target for nearly a decade, ECB President Christine Lagarde has driven an 18-month deep dive into the inner workings of the bank, challenging even core principles of central banking in the hopes of resetting strategy and bolstering credibility.

In the key conclusion of the review, the central bank of the 19 countries that share the euro set its inflation target at 2% in the medium term, ditching a previous formulation of "below but close to 2%," which had created the impression it worried more about price growth above the target than below it.

"We believe the 2% target is clearer, simpler to communicate and a good balance," Lagarde told a news conference. "We know that 2% is not going to be constantly on target, there might be some moderate, temporary deviation in either direction of that 2%. And that is OK."

But Lagarde stopped short of advocating a deliberate overshoot after periods of low inflation like the past decade and flat out rejected that the ECB would seek to make up for lost inflation the same way the U.S. Federal Reserve (Fed) is doing.

"Are we doing average inflation-targeting like the Fed? The answer is: No, very squarely," she said of the U.S. central bank's policy of allowing overshooting to maintain a target average rate.

The widely expected changes left markets unfazed but analysts said the sum of the measures pointed to an even longer period of central bank stimulus, even after emergency measures adopted to fight the COVID-19 pandemic are phased out.

"The new framework is largely in line with expectations, but with a dovish tilt," Berenberg economist Holger Schmieding said. "It enshrines the flexibility which the ECB had granted itself anyway."

Pioneered in the early 1990s by smaller central banks in New Zealand and Canada, inflation-targeting is widely credited with taming price growth and ushering in a period of stable prices.

But the results of the experiment have been mixed, notably over the past decade when central banks like the ECB and the Bank of Japan have struggled with excessively low inflation. That has forced them to cut interest rates deep into negative territory and print money to stimulate activity, casting doubts on the power of central banks.

This persistent undershooting had raised the possibility that policymakers might agree to seek an inflation rate above the target for a defined period of time. But the ECB ultimately concluded that price growth above and below its target was both undesirable and it would not aim to overshoot even to compensate for long periods of low inflation.

"This target is symmetric, meaning negative and positive deviations of inflation from the target are equally undesirable," the ECB said.

The ECB conceded that in certain situations, when especially forceful or persistent monetary support is needed, inflation could moderately exceed its target temporarily and said 2% was not a ceiling.

But the new policy stopped short of explicit commitment to an inflation overshoot, disappointing some who were looking for a clearer message to ensure stimulus well into the recovery.

More importantly, few economists appeared to conclude that the new strategy would have a fundamental impact on policy in the near term, and the ECB's 1.85 trillion euro ($2.19 trillion) Pandemic Emergency Purchase Program is still likely to be wound down early next year.

The ECB also said it was unhappy with the current measure of inflation compiled by the EU's statistics agency as it omits large chunks of housing costs but said any fix would take years so policymakers will also look at other measures of inflation.

In perhaps the biggest change, the central bank said it will do more to help the fight against climate change and will include climate change considerations in monetary policy operations in the areas of disclosure, risk assessment, collateral framework and corporate sector asset purchases.

"The ECB will adjust the framework guiding the allocation of corporate bond purchases to incorporate climate change criteria, in line with its mandate," it said.

The bank will start disclosing climate-related information of its corporate sector asset purchase program by the first quarter of 2023, it added.

Taking on a climate role, the ECB follows the Fed in a foray into social policy. The Fed after its own similar review last year said it would allow the jobs market to run hotter in the future to help low-income families, possibly tempering inequality.