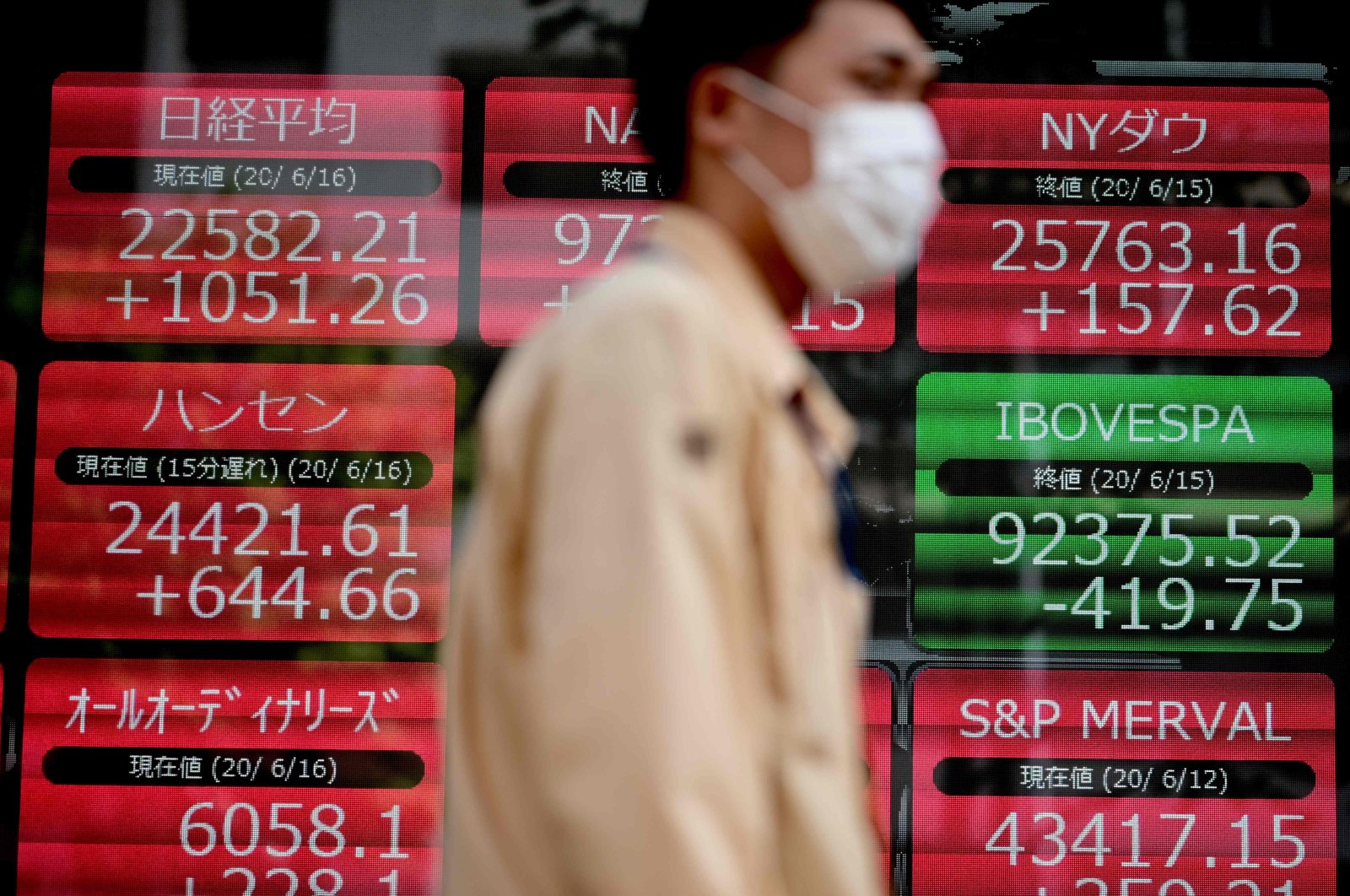 A pedestrian wearing a face mask walks past an electronic quotation board displaying share prices of the the world's main stock exchanges in Tokyo on June 16, 2020. (AFP Photo)
by French Press Agency - AFP Jun 15, 2020 9:09 pm

Asian and European equities shot higher Tuesday as growing fears about a possible second wave of COVID-19 infections were overshadowed by the U.S. Federal Reserve's launch of a massive program to support Main Street businesses hit by the virus lockdown.

The rally across the region helped wipe out most of the losses suffered Monday following news of a spike in new cases in Beijing, Florida, Texas and Tokyo, among other places.

The U.S. Federal Reserve at long last launched its Main Street Lending Program on Monday after making a series of changes to broaden its reach.

The central bank several times in recent weeks was on the verge of rolling out the program but held off as it expanded the criteria to reach more companies struggling to deal with the damage done by coronavirus shutdowns.

"Lenders can find the necessary registration documents on the program site and are encouraged to begin making Main Street program loans immediately," announced the Fed's Boston regional bank, which administers the program.

The program aims to support businesses that are too big to benefit from the Paycheck Protection Program run by the Treasury Department and help them to retain their employees.

After hearing from thousands of firms and banks, the Fed slashed the minimum loan amount to $250,000 from $1 million originally.

The changes also extend the life of the loans to five years, and offer a two-year grace period on principal repayment, while interest payments are deferred for one year.

The Fed also opened the aperture of the facility at the top end, expanding the maximum loan size to as much as $300 million.

The Main Street program is available to businesses with up to 15,000 employees, or as much as $5 billion in annual revenue, that was solvent before the crisis.

Unlike the Treasury Department's PPP loans, which turn into grants as long as most of the funds are used to pay workers, the Main Street loans are not forgivable.

The firms benefitting from the $600 billion in available funding are subject to the restrictions Congress required under the $2.2 trillion CARES Act: they cannot pay dividends to investors or buy their own shares until one year after the conclusion of the loan, and there are restrictions on executive pay.

Once the lenders extend credit to businesses, the Fed will purchase 95% of the loans to ensure banks continue to have cash available to put into the economy.

Investors were also taking heart from reports the U.S. is eyeing a huge infrastructure stimulus as well as the easing of lockdowns around the world, with several European countries opening their borders and British shops trading again.

But the main driver of the gains was the Fed's Main Street Lending Program and an emergency lifeline under which the Fed will buy up to $750 billion in corporate bonds.

The U.S. Chamber of Commerce called it "a lifeline for businesses that have been disrupted by the health and economic consequences of COVID-19."

Fed boss Jerome Powell will give two days of congressional testimony from Tuesday, which observers will be following after he caused ructions on markets last week with a sobering warning about the economic outlook.

Since the pandemic hit in mid-March, the Fed has rushed out a series of emergency programs to pump liquidity into the U.S. economy amid the severe downturn caused by the effort to contain the spread of COVID-19, including buying unlimited amounts of U.S. Treasury debt, corporate bonds and mortgage-backed securities.

The announcement saw all three main indexes on Wall Street reverse, early losses to end well up and the gains filtered through to Asia.

Tokyo soared almost 5%, getting an extra boost from a Bank of Japan move to ramp up aid for firms struggling with virus fallout. The Bank of Japan had increased its lending packages for cash-strapped firms to $1 trillion from about $700 billion but had also kept rates steady, sticking to its view that the Japanese economy will gradually recover from the impact of the coronavirus pandemic.

Seoul surged more than 5% and Sydney almost 4%, while Hong Kong jumped 2.4% and Shanghai more than 1%.

London, Paris and Frankfurt all rose more than 2%.

"With the Federal Reserve back in business backstopping corporate credit and printing money to lend to companies directly, it was immediately back to business-as-usual for the peak-virus, buy everything herd," said OANDA's Jeffrey Halley.

There remains a sense of unease about signs of a COVID-19 resurgence, with Beijing locking down several estates after more than 100 people were diagnosed with the disease, just as the city was getting back on track and after months of no new cases.

"A cluster like this is a concern and it needs to be investigated and controlled – and that is exactly what the Chinese authorities are doing," WHO emergencies director Mike Ryan said.

But AxiCorp's Stephen Innes pointed out that investors were getting too used to the fact that the disease will not disappear without a vaccine but new clusters could be contained rather than governments shutting down entire economies again.

"While the run of COVID-19 headlines emphasize that a demand recovery is likely to be a slow process, it seems unlikely that we see a return to the lockdown measures" in the first half of the year, he said in a note.

The return to buying of riskier assets and selling of safe havens saw the dollar tumble against most currencies, with the Australian dollar and Mexican peso around 2% higher and the South Korean up 0.8%.