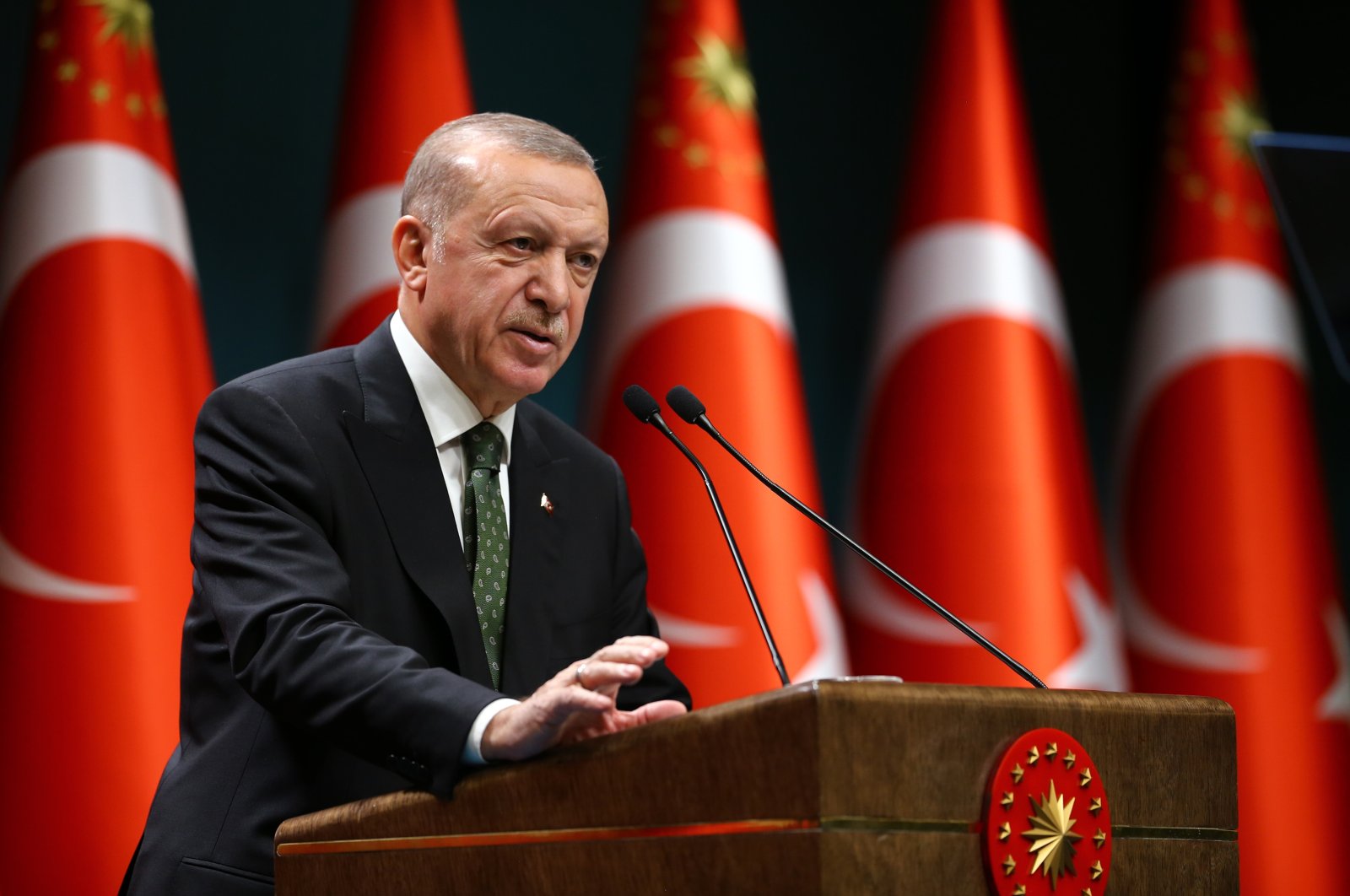 President Recep Tayyip Erdoğan said Wednesday that Turkey should attach much greater importance and focus on employment, production, investment and exports in the coming period.

“There is a new period ahead of us now. We should focus much more strongly on production, investment, employment and exports,” Erdoğan said in his speech at the Turkish Union of Chambers and Commodity Exchanges (TOBB) Economy Council Meeting in the capital Ankara.

“Now we are at a time when even stepping up a gear is not enough, a time that requires a change of tool. We are determined to do whatever it takes,” the president stressed.

The remarks follow Erdoğan’s pledges last week as he announced a series of new economic plans that will enable an improved investment climate for foreign investors backed by an efficient judicial system.

Yet the president stressed it was impossible to boost investments, employment and production with high interest rates and that investors should not be “crushed” by the high rates.

For this purpose, he added, the government pays special attention to consulting with the business community on all issues related to the economy.

“In all the decisions we make, in all the steps we take, we benefit from the common mind we have created together with you,” Erdoğan noted.

He said Ankara will continue to provide all of the suitable conditions needed for both domestic and international investors.

“We will see that our country stands out positively in production, employment, exports and growth,” Erdoğan said.

Turkey’s main priority is the fight against inflation, the president stressed.

He vowed the government will proceed by maintaining price and financial stability, as well as its fiscal discipline, with a growth and employment-oriented approach.

“Our aim is to reach single-digit inflation right away by maintaining fiscal discipline (and) implementing structural and micro reforms” focused on growth and employment, he said.

“We will solve the problems before us in a way that is in line with market economy rules.”

The country’s consumer price index increased to 11.89% in October, up from 11.75% in September, according to official data, while inflation surged 2.13% month-on-month.

Lütfi Elvan, who was named treasury and finance minister last week, on Tuesday also ensured that reducing inflation permanently to single-digit levels was one of the government’s main goals.

“With this policy framework, inflation is expected to fall to 5% in 2023,” Elvan said.

The Central Bank of the Republic of Turkey (CBRT), which also got a new governor last week after the appointment of the former Finance Minister Naci Ağbal, last month raised its 2020 inflation forecast to 12.1%, up from a previous forecast of 8.9%.

In his first public comments last week, Ağbal said the bank’s main goal is to achieve and maintain price stability, and it will “decisively” use all policy tools in pursuit of this aim.

The bank also revised upward annual inflation for next year to 9.4% from 6.2% before stabilizing at around 5% in the medium term.

All eyes on central bank

Erdoğan’s remarks also come a day before a crucial interest rate decision by the CBRT.

Markets are now focused on the rate decision at the first meeting under Ağbal, who is seen as a capable technocrat with a more orthodox approach to policy.

The bank had raised rates in September, but last month it held its key policy rate steady at 10.25% despite expectations for another policy tightening. It raised its late liquidity window rate to 14.75% to counter persistent double-digit inflation.

The market has the expectation that the central bank will raise the policy rate to a level that is sufficient against inflation via traditional monetary policy tools, said Enver Erkan, an economist at Tera Yatırım.

“When the communication side was managed in such a good way, we expect the action side to follow up with a policy rate hike,” he told Reuters on Wednesday, adding that the one-week repo rate is likely to be made the only policy tool again.

Erdoğan underlined that Turkey would end the third quarter with strong economic growth, given the promising leading data for September.

“I believe we will end the year with positive growth, despite the ongoing challenges due to the coronavirus outbreak,” he said.

“We will overcome this problematic period together,” Erdoğan added.

The country’s gross domestic product (GDP) in the April-June period shrank 9.9% from a year earlier after it had grown 4.5% in the previous three months, according to Turkish Statistical Institute (TurkStat) data. The GDP grew 0.9% in 2019.

Ankara forecasts 0.3% growth this year in its medium-term economic program, estimating a 1.5% contraction in a worst-case scenario.