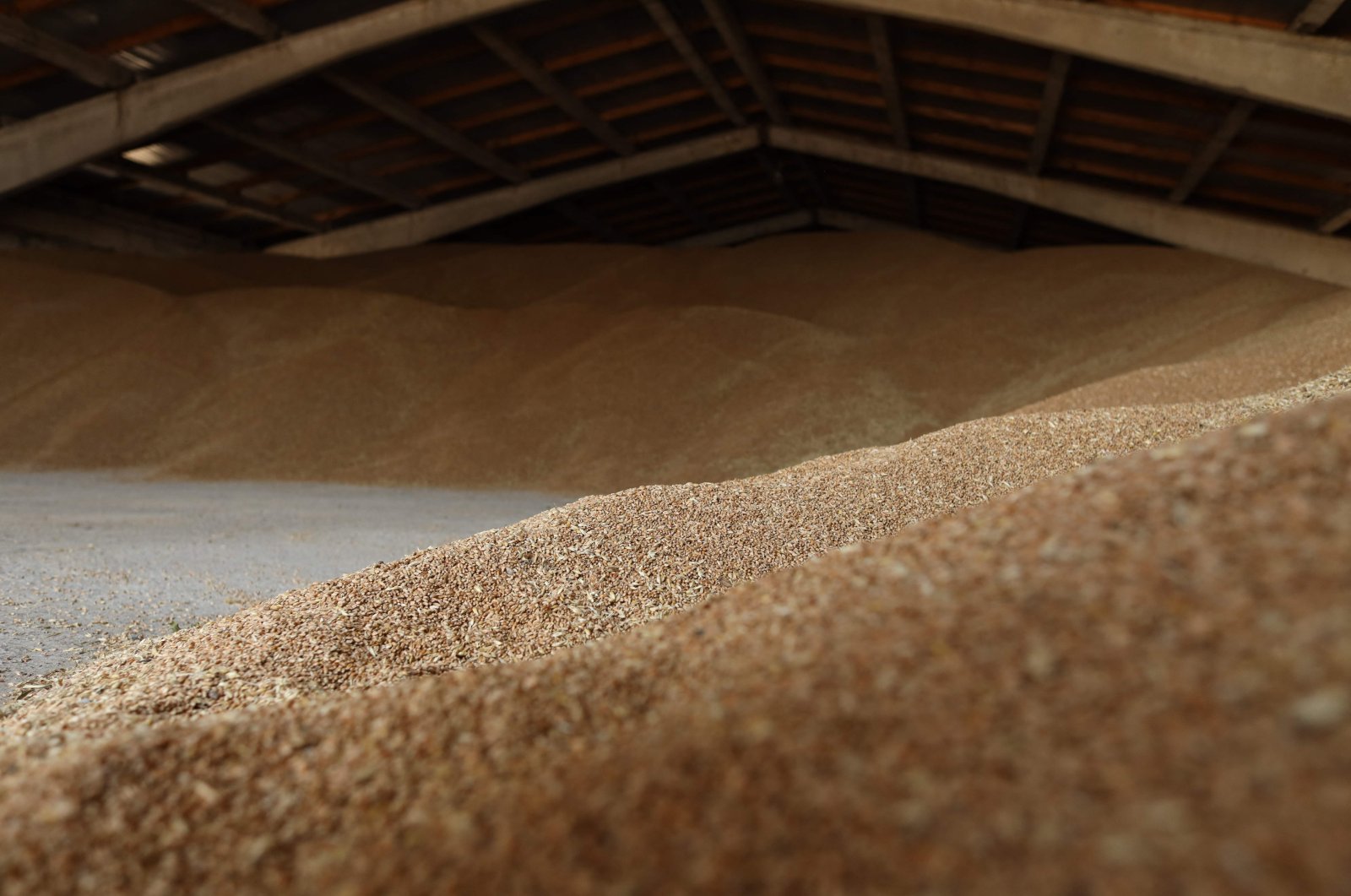 Wheat grains in a storage facility on a farm near Izmail, in the Odessa region, amid the Russian invasion of Ukraine, June 14, 2022. (AFP File Photo)
by Daily Sabah with Agencies Jul 22, 2022 6:01 pm
RECOMMENDED

The U.S., European Union the United Kingdom welcomed the agreement signed by Russia, Ukraine, the United Nations and Turkey to resume grain exports through the Black Sea, with the goal to ease the threat of a global food crisis.

"Today's Istanbul agreement is a step in the right direction. We call for its swift implementation," tweeted the bloc's foreign policy chief Josep Borrell.

The agreements signed by Ukraine, Russia, Turkey & @UN are a critical step in overcoming the global food insecurity caused by Russia‘s aggression against Ukraine.

EU remains committed to help #Ukraine bring as much of its grain into global markets as possible.

Borrell added that the EU continues to provide help in shipping Ukrainian grain.

"The EU remains committed to helping Ukraine bring as much of its grain into global markets as quickly as possible. The EU’s Solidarity Lanes plan has facilitated the export of 2.5 million tons in June alone. We are also working closely with partners such as the U.N. and G-7, to promote a multilateral response to broader aspects of global food security. In this context, we are mobilizing over 7.7 billion euros until 2024," Borrell said in the statement, adding that the bloc will continue to work with and support the U.N. secretary general in addressing the consequences of the Russian war against Ukraine.

Meanwhile, the U.K. government congratulated Turkey and the U.N. for brokering the deal to resume grain exports from war-torn Ukraine, but said the onus lay with Russia to honor its promises.

"(Russian President Vladimir) Putin's barbaric invasion of Ukraine has meant some of the poorest and most vulnerable people in the world are at risk of having nothing to eat," Foreign Secretary Liz Truss said in a statement.

"Now this agreement must be implemented, and we will be watching to ensure Russia's actions match its words."

Others also welcomed the groundbreaking development.

The Secretary-General of the International Maritime Organization, Kitack Lim said he’s pleased about the deal.

"I am very pleased that all parties have reached agreement on the way forward for ships to safely transport much-needed grain and other commodities through the Black Sea..."

Guy Platten, the Secretary-General of the International Chamber of Shipping also said it was a long-needed breakthrough for millions of people. He continued by saying that although the deal is an important step, more work still needs to be done.

"The G7 is working closely with partners like Turkey and others to ensure that we can get that grain out of Ukraine and to places around the world where it's needed without putting at risk Ukraine's sovereignty and protection," Trudeau said.

Italy's Prime Minister Mario Draghi said that the grain deal was "excellent news" for the international community to avoid a global food crisis.

With the mediation of Turkey and the U.N., Ukraine and Russia signed an agreement in Istanbul on Friday on the resumption of Ukraine's grain shipments from Black Sea ports.

Sweden's Minister of Foreign Affairs Ann Linde thanked the U.N. chief and Turkish president for their efforts to ease the global food crisis.

"Sweden welcomes the agreement on export of grain trapped for many months in Ukraine because of Russia's aggression," she wrote on Twitter.

Latvia's Foreign Minister Edgars Rinkevics also took to Twitter, saying: "I commend efforts by the UN and Türkiye to facilitate the deal. I hope this agreement will be fully implemented, especially by Russia."

Under the deal, reached on a U.N.-led plan during July 13 talks in Istanbul, a coordination center will be established to carry out joint inspections at the entrance and exit of the harbors, and to ensure the safety of the routes.

Internationally praised for its mediator role, Turkey has coordinated with Moscow and Kyiv to open a corridor from the Ukrainian port city of Odessa to resume global grain shipments that are stuck due to the Russia-Ukraine war, now in its fifth month.