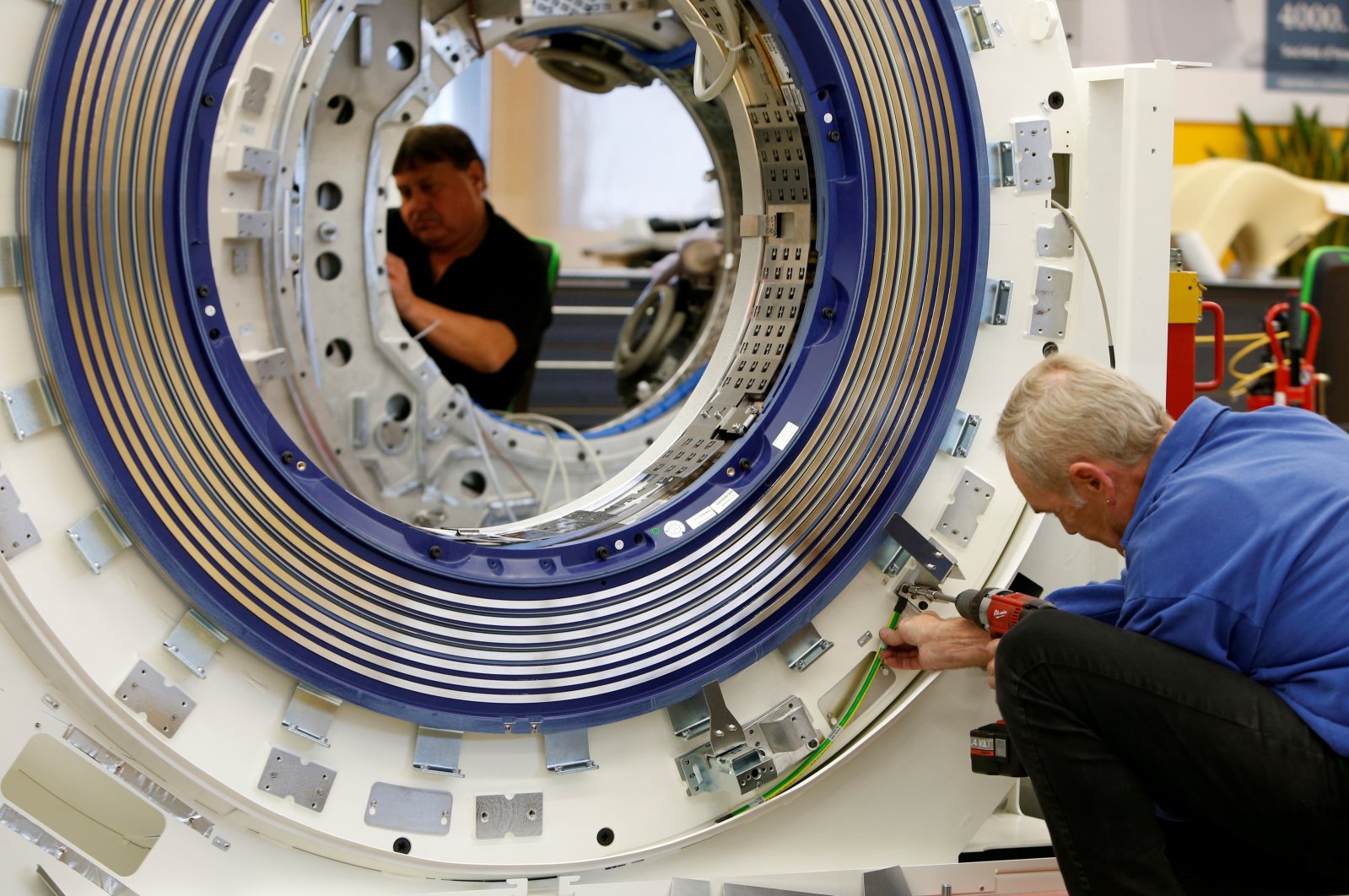 Manufacturing growth in the eurozone soared in October but the recovery from a severely depressed activity at the height of the coronavirus pandemic was again mostly driven by a buoyant Germany, a survey showed Monday.

Similar data Monday also showed British factories lost more momentum in the month, while the activity in China's factory sector accelerated at the fastest pace in nearly a decade.

Also likely of concern to policymakers and highlighting a further divergence in the recovery, a flash reading of the overall survey showed activity in the eurozone's dominant service industry contracted last month as a second wave of the virus swept across Europe.

Still, IHS Markit's final Manufacturing Purchasing Managers' Index (PMI) climbed to 54.8 in October from September's 53.7, its highest reading since July 2018, and ahead of the 54.4 flash estimate. Anything above 50 indicates growth.

An index measuring output, which feeds into a composite PMI due on Wednesday and seen as a good gauge of economic health, bounced to 58.4 from 57.1 in September, comfortably beating its 57.8 flash reading.

"Eurozone manufacturing boomed in October, with output and order books growing at rates rarely exceeded over the past two decades. However, while the data bode well for production during the fourth quarter, the expansion is worryingly uneven," said Chris Williamson, the chief business economist at IHS Markit.

"Germany was once again the star performer by a wide margin, as factories reported a surge in new orders that surpassed anything previously seen in the survey's 25-year history."

But Germany, like some of its peers in the bloc, has recently imposed controls almost as strict as the lockdowns of the first phase of the crisis suggesting at least some of that manufacturing activity might be curtailed.

There is a high risk the resurgence in coronavirus now underway across Europe would halt the nascent eurozone recovery, a recent Reuters poll showed.

The eurozone economy contracted 11.8% in the second quarter when many businesses were closed and citizens urged to stay home. But it expanded a much-better-than-expected 12.7% last quarter after many lockdown restrictions were eased, official data showed Friday.

Demand soared in October and factories were able to build up a healthy backlog of work. Optimism waned, however, and as in every month since May 2019, headcount was reduced, the PMI showed. The future output index fell to 62.7 from 63.8.

"While manufacturing as a whole may be booming for now, the sustainability of the recovery will depend on household behavior returning to normal and labor markets strengthening," Williamson said. "Given second waves of virus infections, this still looks some way off."

On the other hand, British factories lost more momentum in October, especially among consumer goods makers, data showed Monday, adding to signs of a slowdown in the economy as the number of coronavirus cases mounts again.

However, a measure of optimism for the year ahead hit its highest level in nearly three years.

The IHS Markit/CIPS manufacturing PMI fell to 53.7 from September's 54.1 but was up a touch from a preliminary reading.

Stock-building by clients in Europe ahead of a possible no-deal end to Britain's post-Brexit transition period on Dec. 31 and increased demand from the recovering economies of China and the United States boosted exports, IHS Markit said.

Intermediate and investment goods industries reported a strong October. But consumer goods firms, which are more sensitive to short-term changes in the economy, saw output and new business fall for the first time since they began to recover from the COVID-19 shock earlier this year.

Britain's economic recovery from the coronavirus lockdown has lost steam as the pandemic builds again and as the government scales back its jobs support scheme.

Monday's PMI survey showed job losses were most marked in the consumer goods sector. By contrast, staffing levels rose for the first time in eight months in the intermediate goods category.

Over 60% of companies expected output to rise over the coming year, compared to 10% forecasting a decline.

"However, some firms also raised concerns about the potential impact of both the ongoing pandemic and Brexit uncertainty," Markit said. Input prices rose by the most since December 2018 and some of the increase was passed on to clients.

Separately, activity in China's factory sector accelerated at the fastest pace in nearly a decade in October as domestic demand surged, the data showed Monday, adding further momentum to an economy that is quickly recovering from the coronavirus crisis.

The Caixin/Markit Manufacturing PMI rose to 53.6 from September's 53.0, with the gauge staying above the 50-level for the sixth consecutive month.

China's vast industrial sector is steadily returning to the levels seen before the pandemic paralyzed huge swathes of the economy early this year, though the global outlook is dimming as many Western countries battle still rising COVID-19 infections and go back into virus lockdowns.

October's PMI reading was the highest since January 2011.

Pent-up demand, stimulus-driven infrastructure and surprisingly resilient exports have propelled the manufacturing rebound. Consumption, although hit hard earlier in the year, has also recovered in the third quarter.

"Recovery was the word in the current macroeconomy, with the domestic epidemic under control. Manufacturing supply and demand improved at the same time," Wang Zhe, senior economist at Caixin Insight Group, wrote in a note accompanying the survey release.

While the Caixin survey showed total new orders surged to the highest level since 2010, the gauge for new export orders fell from the month before, though it remained in expansionary territory.

"The second wave of coronavirus infections in Europe and the third wave in the U.S. have significantly suppressed China's overseas demand," Wang said.

The private survey also showed Chinese factories hired workers for the second month in a row, though the increase was slight.

Factory output also rose slightly from the month before, while a gauge of business confidence rose to a multi-year high.

The pandemic has been largely controlled in the world's second-largest economy, although a local outbreak emerged recently in the western region of Xinjiang.

The Caixin survey focuses more on small and export-oriented firms while China's official survey, which was released on Saturday, largely tracks large companies and state-owned enterprises.

The official gauge showed factory activity expanded at a slightly slower pace in October but it was slightly above analysts' expectations.

"There are still many uncertainties outside of China, so policymakers need to be cautious about normalizing post-coronavirus monetary and fiscal policies," said Wang.

Analysts expect China's economy to grow about 2% in 2020, the weakest since 1976 but still far stronger than other major economies.