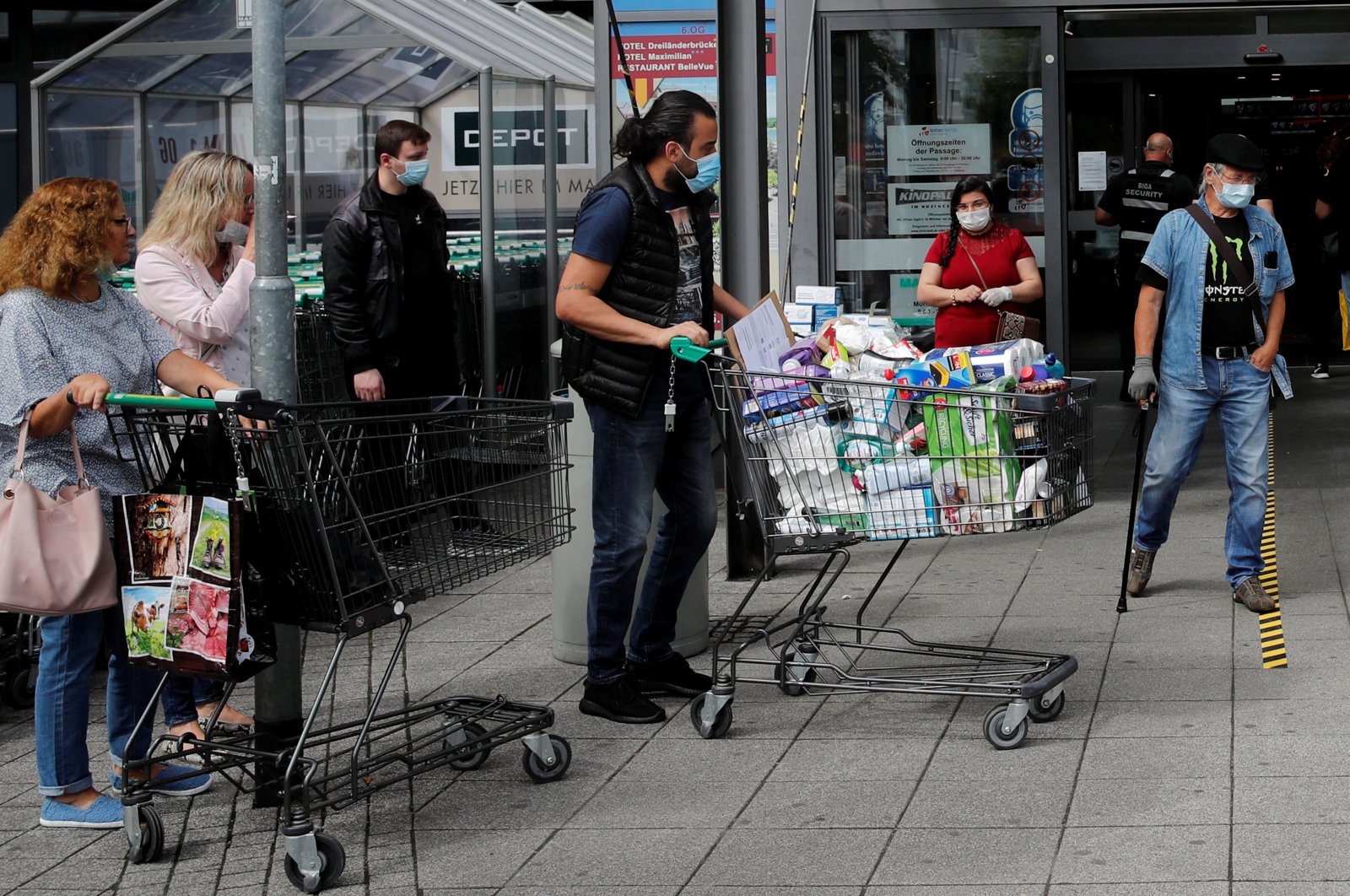 People are seen in front of the entrance of the Rhein Center shopping mall after the reopening of the borders, amid the coronavirus outbreak, in Weil am Rhein, Germany, June 15, 2020. (Reuters Photo)
by REUTERS Jun 23, 2020 1:38 pm
RECOMMENDED

The historic eurozone economic downturn eased again this month as swathes of businesses reopened after closures to stem the spread of the coronavirus, but a V-shaped recovery may be unlikely, a set of closely watched surveys showed on Tuesday.

Over 9 million people globally have been infected by the coronavirus and around 500,000 have died. Although new cases are still being reported, governments across Europe are gradually easing tough restrictions on citizens and businesses.

Surveys measuring the rate of change compared with the previous month showed activity was still contracting across much of Europe however, with France a stand-out as the lockdown was loosening there led to a modest return to growth.

IHS Markit’s eurozone Flash Composite Purchasing Managers’ Index (PMI), seen as a good gauge of economic health, recovered to 47.5 from May’s 31.9, moving closer to the 50 mark separating growth from contraction. It hit a record-low 13.6 in April.

A Reuters poll had predicted a more modest rise to 42.4.

“As much as more than a month of (full) lockdowns had sent economies into a standstill, the gradual reopenings of the last two months have led to a sharp rebound in activity. However, it is anything but certain that the eurozone economy can maintain this momentum,” said Carsten Brzeski at ING.

“Higher unemployment, companies going out of business, as well as plans to further cut back on staff and falling orders, suggest that the current V-shaped recovery could quickly run out of steam.”

The bloc’s economy is forecast to contract an unprecedented 12.5% this quarter but grow 7.9% in July-September, a Reuters poll predicted earlier this month.

National data showed a private sector recession in Germany eased further this month but coronavirus-related disruptions and uncertainty continued to weigh on demand, suggesting Europe’s largest economy is set for a slow recovery.

And while June’s German reading was better than expected, concerns about the labor market and ongoing job cuts clouded the outlook.

In France, the bloc’s second-largest economy, business activity rebounded more than expected and returned to growth after three months of an unprecedented downturn.

A sharp improvement from May saw the French PMI jump to 51.3, far exceeding the median expectation in a Reuters poll for a reading of 46.3.

Britain’s private sector, outside the currency union, shrank less than predicted this month as more businesses restarted work after a lockdown, putting the economy on course to return to growth from July.

“Overall, today’s data provide some reassurance that the economy is getting back on its feet. But with some restrictions still in place and fears of a second wave lingering, it will be some time before activity returns to pre-virus levels,” said Jessica Hinds at Capital Economics.

Optimism about the coming year has returned; however, the eurozone PMI’s future output index, which had been below 50 for three months, recovered to 55.7 from 46.8, its second-largest rise since comparable data were first available in 2012.

The PMI for the bloc’s dominant service industry bounced to 47.3 from 30.5 in May, denoting a much shallower contraction and beating the 41 forecast.

Factory activity in the region, which was contracting long before the coronavirus, declined again, though at a much slower pace. The manufacturing PMI jumped to 46.9 from 39.4, ahead of the 44.5 median forecast.

But manufacturing headcount was reduced again. The employment sub-index held stubbornly below 50 at 41.3, although it was up from May’s 37.6.