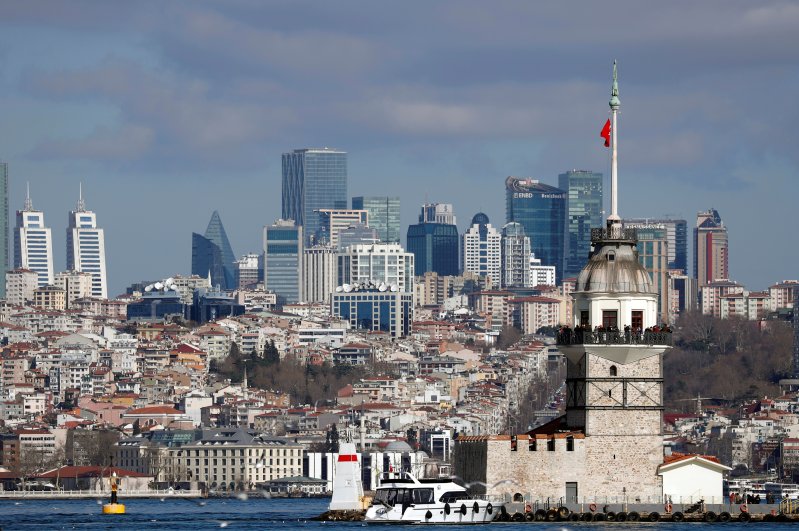 Maiden's Tower, an islet on the Bosphorus, is pictured with the city's skyscrapers in the background in Istanbul, Turkey, February 23, 2020. (Reuters Photo)
by Daily Sabah with AA Feb 27, 2020 5:16 pm
RECOMMENDED

The international credit rating agency Fitch has greater confidence that Turkey's economic growth is recovering in the near term, the director of the agency’s sovereign team said.

“In 2020 we expect a recovery, with GDP growth going from 0.4% last year to 3.9% this year,” Douglas Winslow told Anadolu Agency (AA) Thursday. “That's driven by private consumption and supported by the lower interest rate, as well as a pretty sharp pickup in private bank lending, which is growing around 25% currently.”

Pointing to Turkey's recovering economic outlook, Winslow said: "We also expect investment to return to growth this year of around 3%. A bit more generally, investment sentiment has also been supported by the better current account position, which moved to a surplus of 0.2% of GDP in 2019."
He added that the agency sees some near-term risks of greater volatility. “For example, from geopolitical developments and particularly from the monetary policy, if interest rates are cut too much, that puts additional pressure on the lira," he said.

Asked about the possibility of upgrading Turkey's sovereign credit rating in the future, Winslow said: "In terms of opportunities from the rating perspective, if we saw better reform progress against the government's new economy program, (this) would be helpful for the ratings. For example, if we saw pension reforms boost Turkey's savings rate ... We think the condition for implementing difficult reforms is better this year given that the economy is recovering and there are no elections planned (or scheduled) for three and a half years."
The agency last week affirmed the country’s credit rating at "BB" with a stable outlook.

“Economic growth is recovering strongly, inflation has fallen from 20% at the beginning of last year, the current account has improved and external risks, although still high, have eased, supported by the real effective exchange rate adjustment and private sector deleveraging,” it said in a statement.

The agency forecast 4% GDP growth in 2021 with stronger investment, some moderation in private consumption growth and a smaller drag from net exports. "We continue to estimate Turkey's trend rate of growth at 4.3%," it added.

The major emerging market economy entered a promising era of growth in the third quarter of last year, taking a turn after three consecutive quarters of contraction.

The economy grew 0.9% year-on-year between July and September of 2019. In the first two quarters, the economy contracted 2.3% and 1.6%, respectively, on an annual basis. In 2018, the economy posted an annual growth rate of 2.8%, narrowing in the last quarter.

A Reuters poll of 16 economists earlier this week showed Turkey’s economy grew 5% in the fourth quarter and expanded 0.6% in the year as a whole, above the government forecast.

Economist forecasts for fourth quarter growth ranged between 4.0% and 6.1%, full-year growth forecasts range between 0.4% and 1%.

Turkish economic growth has averaged around 5% over the last two decades. During a financially and economically turbulent period that kicked off in the second half of 2018 and stretched into the first half of 2019, the economy was battered by currency volatility, high inflation and high interest rates, resulting in tumbling domestic demand from consumers and investors.

The Central Bank of the Republic of Turkey (CBRT) responded by raising its policy rate to 24%, where it had stayed until last July. It has cut rates by 1,325 basis points since then in order to boost growth.

The Turkish Statistical Institute (TurkStat) will publish the Turkish economic growth data on March 2 at 0700 GMT.

"We also maintained our assessment that the longer-term potential trend growth of the Turkish economy is around 4.3%. The composition and sustainability of GDP growth are particularly important for the rating. Some of the government's planned reform measures are aimed at reducing the risk of greater imbalances building up," Winslow concluded.