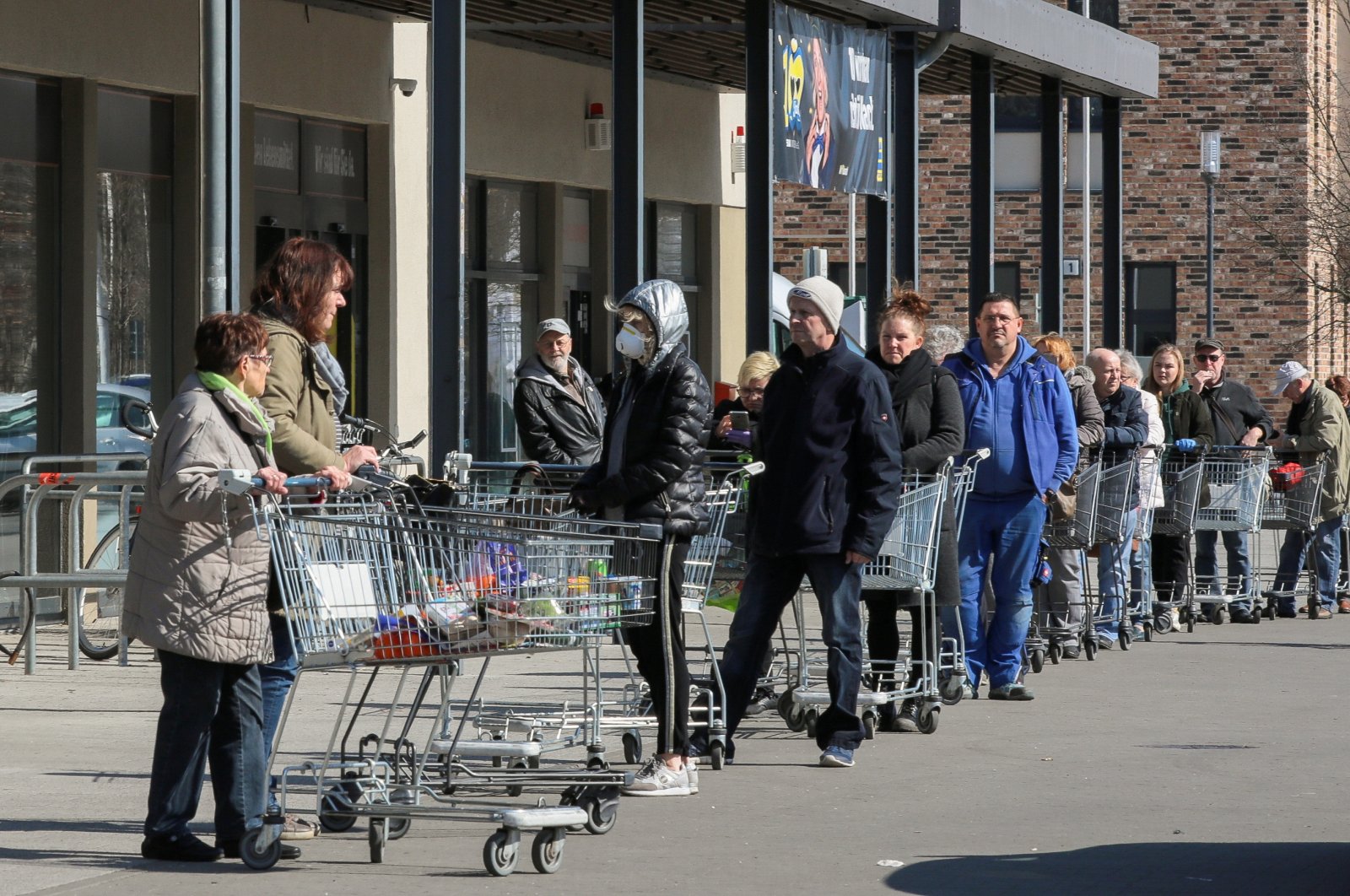 Shoppers leave as others wait in a queue to enter a supermarket in Schulzendorf near Berlin, during the coronavirus outbreak, Germany, March 25, 2020. (Reuters Photo)
by Agencies Oct 22, 2020 12:00 pm
RECOMMENDED

The GfK institute said its forward-looking consumer sentiment index, based on a survey of around 2,000 Germans, fell to minus 3.1 points heading into November from a revised minus 1.7 points in the previous month.

“The rapid increase in infection rates is leading to a tightening of restrictions brought on by the pandemic," said GfK consumer expert Rolf Buerkl. “Fear of a second lockdown, should infections get out of control in the coming winter months, is also increasing.”

“The recovery in sentiment from early summer this year has come to a standstill, leaving the consumer climate to slide again,” Buerkl said.

Germany's number of new COVID-19 cases per 100,000 people over the past seven days has climbed past 50, according to the Robert Koch Institute, the country’s disease control center.

The institute on Thursday reported that it had recorded 11,287 new cases over the past 24 hours, the first time there have been more than 10,000 daily cases since the pandemic began, shattering the previous record figure of 7,830 daily infections set on Saturday.

Buerkl said another weekly GfK survey showed that three-quarters of Germans saw the COVID-19 pandemic as a “big or very big threat,” with more than half worried about the pandemic’s impact on their personal future. He said consumers’ prospects have never been so dim since that survey started in April.

The drop in consumer sentiment was mainly driven by falling economic and income expectations and a rising propensity to save.

“Consumers apparently assume that the much more active infection process in Germany will slow down the previously hoped for rapid recovery of the German economy,” Buerkl said.

The pandemic pushed Germany's economy into a recession in the first quarter, and the drop in consumer confidence suggests that increasing private consumption may not continue to bring growth back around, said ING economist Carsten Brzeski.

“New uncertainty and new restrictions, as well as local lockdowns, have already started to dampen consumer confidence and the prospects for private consumption,” Brzeski said in a research note.

"Given that it very much looks as things will first get worse before they get better, both in terms of infections and restrictions, the risk of a double dip in Germany is also increasing.”

The German government currently expects the gross domestic product to shrink in 2020 by 5.8% before rebounding by 4.4% next year, assuming that the pandemic will remain under control.

The country’s leading economic research institutes last week forecast a slower recovery than originally predicted, with a rebound being held back by sectors particularly hard hit by social distancing restrictions such as restaurants, tourism, events and air travel.

Buerkl said a stabilization in consumer sentiment in the coming months would depend on infection rates.