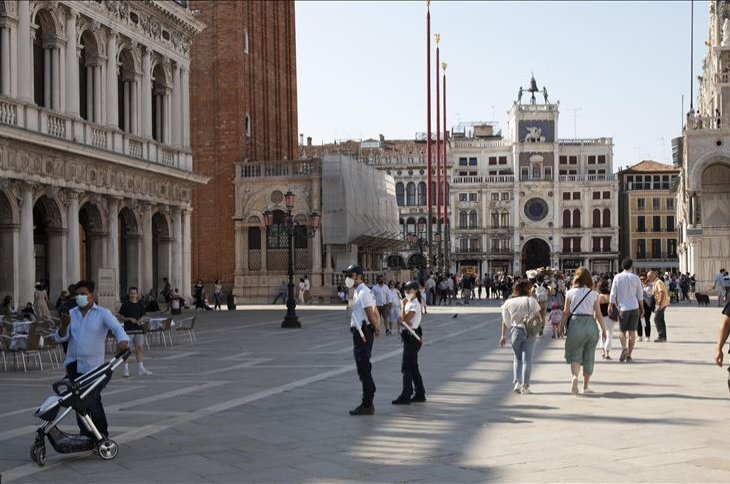 Italy's Prime Minister Giuseppe Conte emerged from the peak of the coronavirus pandemic with bolstered leadership but faces a tough test this fall when the economic crisis could inflict its deepest wounds.

The challenge of handling the unprecedented crisis that hit Italy in late February further strengthened his mediatic and political exposure.

A majority of Italians appreciated his "centralized" management of the emergency, during which Conte was forced to make quick and radical decisions, like imposing an almost total lockdown that closed the country for two months.

His televised news conferences, also delivered via social media, became a regular appointment for Italians eager to be updated and reassured on the developments of the crisis.

Italy was the worst-hit country globally in the first phase of the pandemic, which has claimed more than 34,000 victims. Its restrictions on businesses and people became a sort of experiment, emulated by other European countries to contain the outbreak.

A survey by pollster Ixe last month showed that 59% of Italians trust Conte, up about 20% since he imposed the lockdown about three months earlier.

"He presented himself as the commander-in-chief amid the storm," said Massimiliano Panarari, a political analyst at Rome's Mercatorum University. "This was the first bio-political crisis in Italian history, and people had to trust the government as their own survival was at stake."

Proposed as premier in June 2018 by the anti-establishment Five Star Movement, Conte has assumed political independence that gradually transformed him from a "puppet," as critics derided him, into a power broker.

The two ruling parties are characterized by weak leadership and would very likely lose their majority in parliament in case of new elections. That's why they are keeping this government alive, according to analysts.

Media reports saying Conte would be ready to create his own party, however, have sparked new tensions within the government, despite the premier's denials.

Pollsters estimate a possible Conte party, dubbed Con Te (With You), could grab between 12% and 15% of the vote, stealing supporters from his own partners.

"The votes would come in equal parts from the Five Stars' electorate and the PD's one, for about 5% each," said Lorenzo Pregliasco, founder of pollster YouTrend. "The two allies have probably realized by now that they cultivated a political competitor."

During his two stints, the Italian premier earned a reputation in Europe as a moderate and reliable leader, a sort of barrier against rising euro skepticism promoted by Italy's populist parties.

His contribution to European Union negotiations for a multibillion-euro recovery fund aimed at shielding the weakest European countries from the economic damages of the pandemic was crucial. But it now risks being neutralized by his conflicting allies, split about how to use the funds to revive Italy's struggling economy.

An ongoing investigation by Bergamo prosecutors on the failed closures of two virus clusters in the northern Lombardy region, the worst-hit area by the virus, could also tarnish Conte's political image.

The premier was questioned for three hours Friday by prosecutors as a witness in the case, but he said he was not worried and "would do everything I've done again."

The real test for Conte's political survival, however, lies ahead. After handling the health emergency, he is due to shepherd Italy through what is expected to be the worst recession since World War II.

At the end of May, the Bank of Italy stressed the strict lockdown imposed nationwide to stop the pandemic nearly collapsed the economy. Economic forecasts indicate Italy may suffer a drop in its gross domestic product between 8% and 13% in 2020.

Carlo Bonomi, head of the main business lobby Confindustria, recently said that up to 1 million jobs are estimated to be wiped out by the pandemic. The crisis risks further exacerbating the economic divide between the richer and more industrialized north and the mainly agricultural south, where youth unemployment rates top 40%.

The government has earmarked about 75 billion euros ($84.4 billion) in aid to help businesses and families hit by the fallout from the pandemic, but it may prove insufficient as the full effects of the crisis materialize in the fall just as the Cabinet needs to draw up its budget for next year.

"The crisis brought Conte to the forefront, but at some point people will expect him to deliver," noted Wolfango Piccoli, head of London-based research firm Teneo.

A big economic summit called by Conte with all the main political and social stakeholders, which started on Saturday, has been boycotted by the opposition and risks exposing rifts among ruling parties over a long-term economic plan.

"When the economic and social costs of the pandemic will become dramatically clear this autumn, then the parties that support Conte will turn against him and will use him as a political scapegoat," Piccoli said.