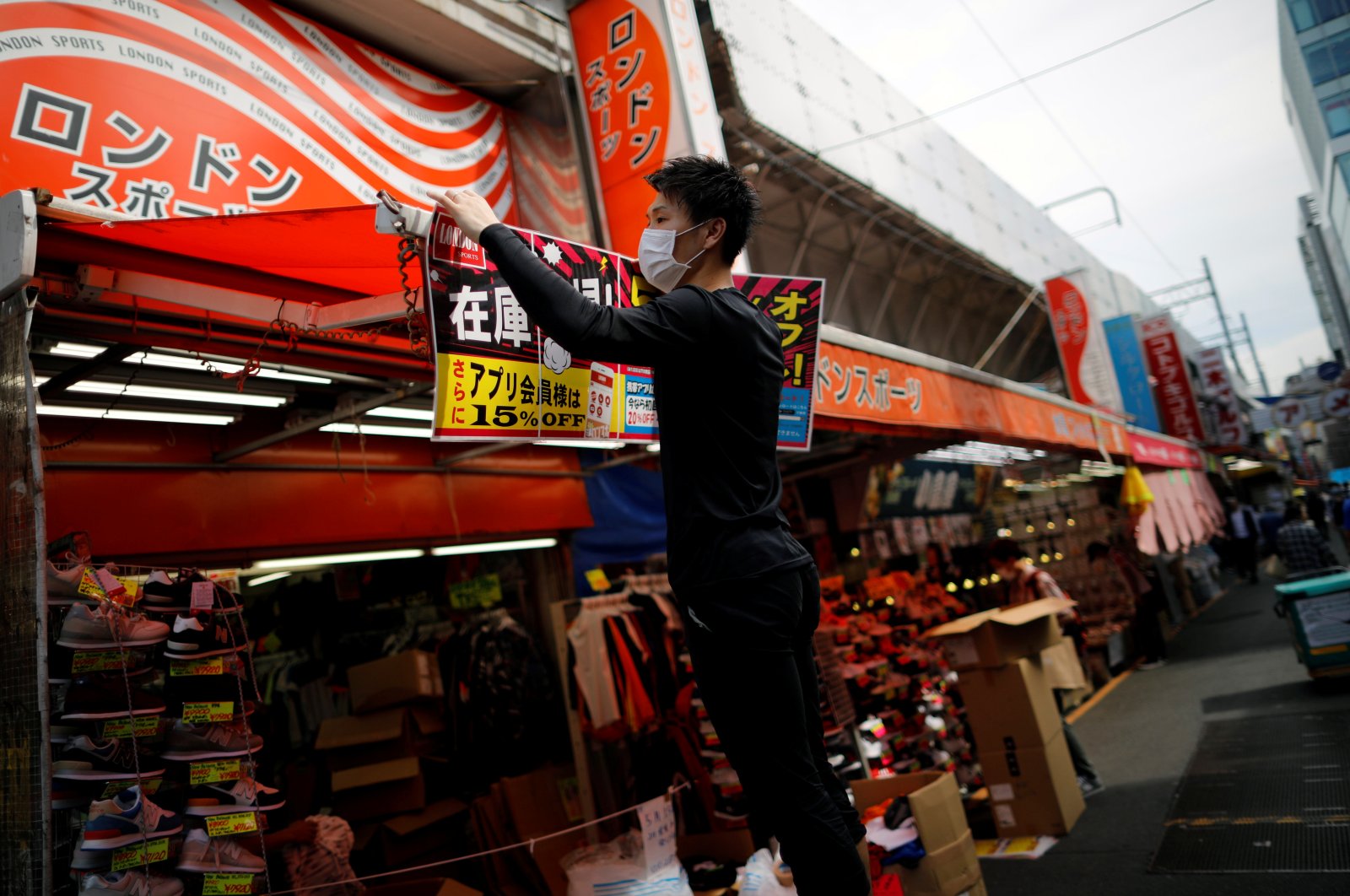 An employee of a shoe shop prepares to reopen the business during the spread of the coronavirus in Tokyo, Japan, May 14, 2020. (Reuters Photo)
by REUTERS May 14, 2020 2:47 pm
RECOMMENDED

For Japan's shell-shocked small businesses, a promised $1.1 trillion in stimulus funds is proving too little, too late, raising the likelihood of a surge in bankruptcies at companies that employ nearly three-quarters of the workforce.

Prime Minister Shinzo Abe's government last month declared a state of emergency in response to the coronavirus crisis and rolled out a package equal to 20% of economic output, including loans for small businesses.

But seven business owners told Reuters of deep frustration at a process they said was taking too long and not delivering enough. Abe, under fire for his handling of the crisis, has said the government would take additional stimulus measures.

But small businesses, which employ 70% of the workforce, are already on the brink of disaster. The outbreak has pushed more than 140 companies to bankruptcy since February, with more expected toward the end of the month, according to research firm Tokyo Shoko Research.

Yuji Hara, 63, the president of Kaze Travel agency in Tokyo, said the biggest worry was his employees. He has applied for government assistance for his workers, which pays employees 8,330 yen ($78) a day. But the money hasn't arrived yet and he borrowed from a state-backed lender to pay salaries.

With no revenue in April and probably none for the next few months, he's not sure when he'll be able to repay that.

"Liquidating the business would be the most decent decision, but I have 30 employees I need to support," said Hara, sitting in an empty office.

As of Wednesday, 16,724 businesses had applied for such aid and 6,571 cases had been approved.

In the worst-case scenario, almost 40% of Japan's 1.5 million companies could go bankrupt if sales continue to fall by 50% for 11 months without bank loans or government stimulus, research firm Teikoku Data Bank predicts.

Although that scenario appears unlikely, it does illustrate how critical government aid is to small companies.

"We know the current situation is not the best," said an official at the labor ministry, which is in charge of some aid.

"We are considering measures to provide the money more quickly," said the official, who was not authorized to speak to the media and was speaking anonymously. The official added that there was a limit to financial resources for the payments.

Japan is due to lift its state of emergency for much of the country on Thursday, although Tokyo – the heart of the economy – will remain under restrictions.

On weekdays in April, the lobby of the Shinjuku ward office in Tokyo was crowded with people lining up to apply for interest relief on new loans – a sharp contrast with the government's call for social distancing.

Nobukazu Aoki, the 69-year-old owner of an izakaya restaurant, was among those waiting in a line last month. He said sales had fallen by 90%.

Weeks later, he told Reuters he had yet to receive a loan.

"I am not counting on that money any longer," he said.

He keeps his place open at lunchtime so his seven part-time employees can earn some money. He checks the temperature of every customer before letting them in.

"Unless the government compensates what businesses have lost, there will be a big wave of bankruptcies and unemployment," said Taro Saito, an executive researcher at NIL Research Institute.

Japan's unemployment rate was 2.5% in March, a number that could rise to 4% if the downturn continues, Saito said.

Unlike some other countries, such as France, Japan has yet to offer to help small businesses pay rent. Abe has said he would consider such a step.

Rent eats up a quarter of monthly revenue for Akihiro Yoshida, 33, who runs a hair salon in Tokyo's upscale Aoyama district that employs four people.

"If this situation continues, I might have to move to a cheaper location," he said. "But this location means a lot for me in terms of developing my business."

The Tokyo Metropolitan Government has given aid to some businesses, including restaurants and karaoke parlors, but hair salons were offered smaller amounts.

Kei Kubo, 48, who owns two salons in the Daikanyama area, said he was only able to speak to a bank about a state-backed loan a month after he applied in early April.

"The government looks unwilling to help us out," Kubo said. "I don't see any urgency in them."

Hajime Yoneda, 47, an owner and chef for Hajime, a Michelin three-star restaurant in Osaka, has been collecting signatures for a petition urging the government to support rent and increase employment payouts.

"Typically restaurants can survive without sufficient cash only for three months," he said. "The money should be delivered as soon as possible before more of them go bankrupt."