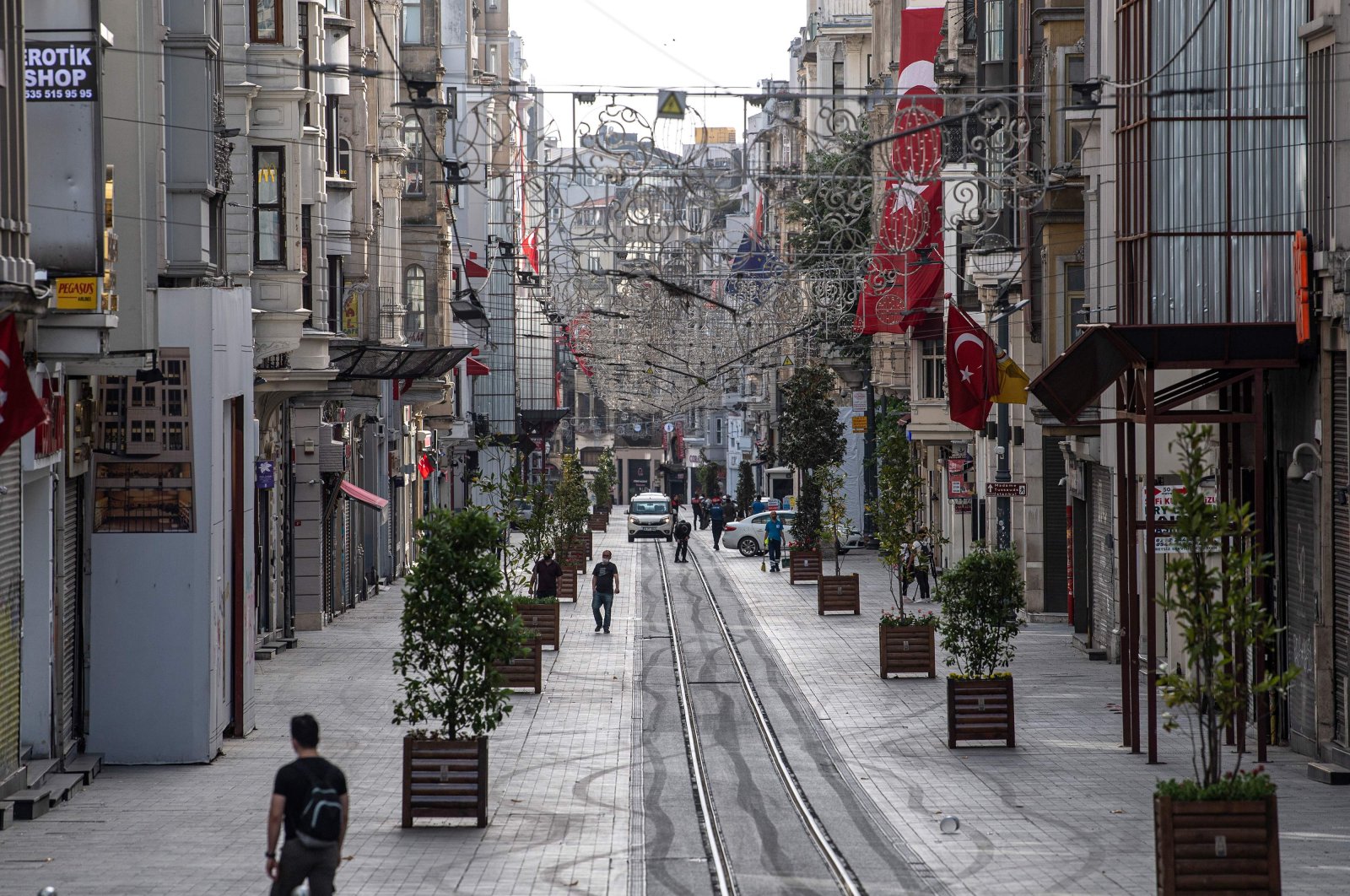 People walk in the deserted İstiklal street at Taksim district in Istanbul on May 16, 2020, during a four-day curfew to prevent the spread of the pandemic COVID-19 caused by the novel coronavirus. (AFP Photo)
by DAILY SABAH WITH AA May 17, 2020 12:51 pm

The emergence of the coronavirus pandemic had initially halted world trade by not only disrupting supply chains and export-import channels but also causing the cancellation or postponement of various small- or large-scale global trade fairs. Countries now looking to find new solutions to resume trade are considering their options. Meanwhile, Turkey’s Trade Ministry stepped up to organize trade fairs online, the first one of which is scheduled for June 1-3.

Pekcan said that the business opportunities were restricted at a global scale as free movement and travel were suspended in many countries across the world in order to curb the spread of the virus, thus the digital marketing methods and virtual trading platforms have become more important during this process.

Pekcan stressed that the works for the virtual fair organizations were initiated following a trade delegation meeting with several countries, which they continue to successfully carry out in coordination with the exporters' associations.

The virtual fairs will continue with the "Agrivirtual-Virtual Agricultural Machinery Fair" due to be held between June 22-26, with the contribution of domestic software.

The trade minister said that participating companies and their products will be introduced and prompted through virtual fairs that are to be organized on digital platforms 24/7 between designated dates, with methods such as online seminars and bilateral talks between the companies and buyers.

The Shoedexpo show and leather fair, the first of the online fairs, which Pekcan states will ensure that the local companies will have a platform to promote themselves and take place among global competitors, will be organized with the cooperation of Aegean Exporters' Union General Secretariat with the participation of 30 exhibitors and 250 professional buyers from abroad.

“Our companies will bring their collections prepared for the autumn-winter season to the world on the digital platform and carry out online bilateral business meetings with global buyers,” the minister added.

The Virtual Agricultural Machinery Fair “Agrivirtual” will be held on June 22-26, in cooperation with the Ministry and the Central Anatolian Exporters' Associations along with the cooperation of Selçuk University.

"This fair, which is set to be organized with the contribution of domestic software, will allow participants to visit the exhibition area in 3D, along with video chat meetings between the visitors and the companies,” Pekcan said, adding that over 100 agricultural machinery exporters will be meeting more than 300 global buyers within this fair.

Pekcan went on further explaining that the fairs came to the ministry’s agenda following virtual trade delegation meetings that were also initiated for export-oriented government support to the process.

The minister noted that the country will overcome the obstacles in developing trade brought about by the pandemic which makes social isolation a necessity.

“Our ministry will continue to maintain its pioneering role in such works at full speed and remove the obstacles in front of our exporters,” Pekcan highlighted.

Meanwhile, according to an AA report published earlier on Saturday, general trade delegation programs were also implemented, along with the virtual trade committee organizations.

Accordingly, the first virtual trade delegation was organized with Uzbekistan between May 13-15.

The virtual trade delegation programs will continue on May 27-29 with the Kenya Virtual Trade Delegation covering the food and fast-moving consumer goods (FMCG) sectors such as personal care products, cleaning products and baby products.

For India, which is among the target countries determined by the ministry, a virtual trade delegation program is set to be organized between June 15-19 covering the tobacco, olive and olive oil, food and non-food fast consumption products, agricultural machinery, cold stores and air conditioning sectors along with nuts and products, cereals, pulses, oilseeds and products, dried fruits and products, fruit and vegetable products, aquaculture and animal products and ornamental plants and products.

A general trade delegation to Germany, Kazakhstan, Nigeria, Bulgaria and Pakistan is planned to be organized in the coming period.

Meanwhile, the first sectoral trade delegation is being conducted on a virtual platform by the Istanbul Chemicals and Products Exporters' Association for the building chemicals, and the paint industry is currently being carried out with Colombia and the surrounding Latin American countries.

Participants in the virtual trade delegation included 13 firms from Turkey along with 25 firms abroad, 15 from Colombia and the rest from the surrounding countries.