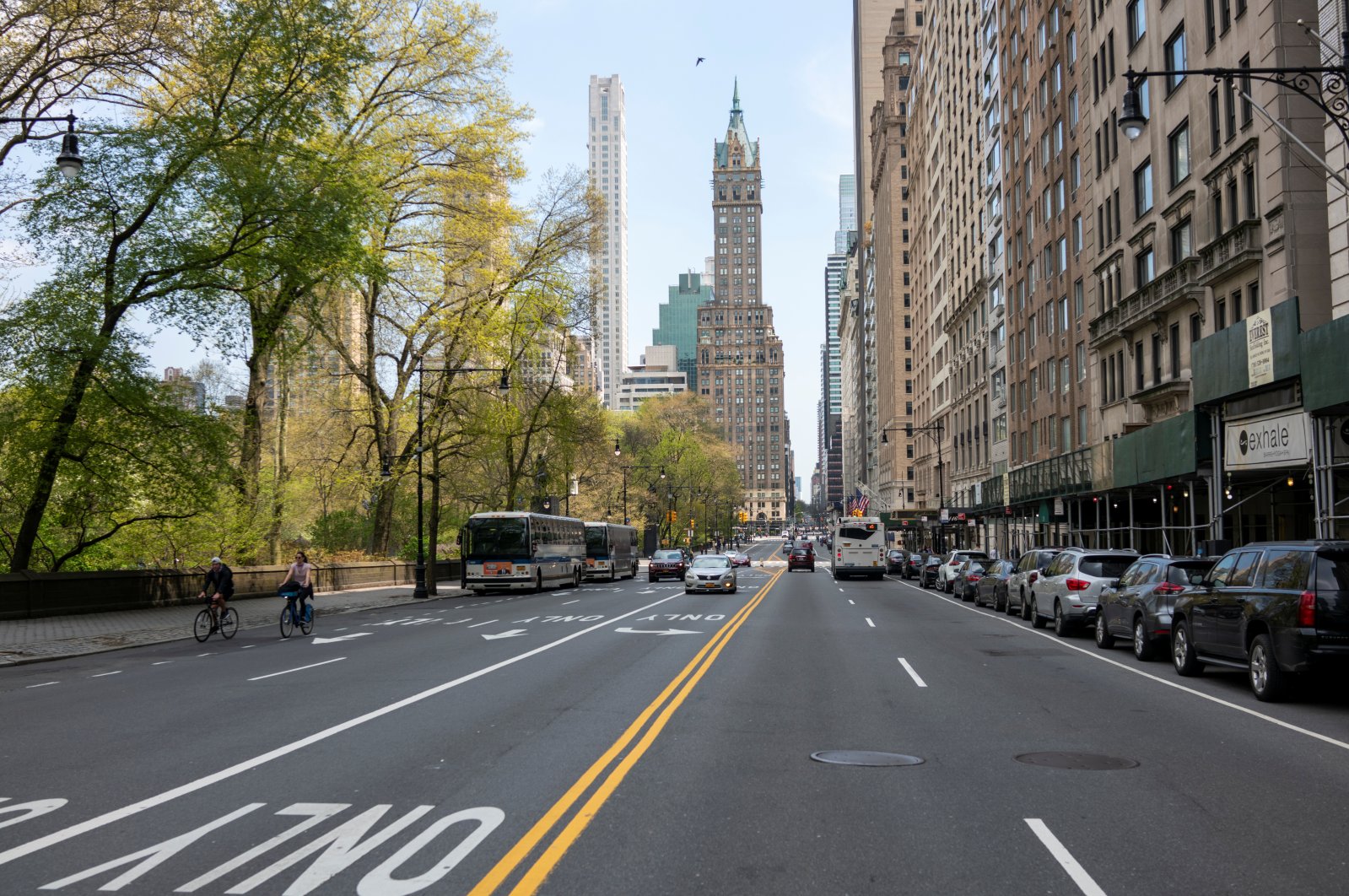 Bicyclists ride down a relatively quiet Park Avenue South as the spread of the coronavirus disease continues in the Manhattan borough of New York City, U.S., April 25, 2020. (Reuters Photo)
by Compiled from Wire Services Apr 27, 2020 11:42 am

Health authorities warn that increasing human interactions and economy activity now, without the means to do so safely, will only backfire as more states are set to restart their economies following weeks of lockdowns that have thrown nearly one in six American workers out of their jobs

Another wave of states prepared to ease coronavirus restrictions on U.S. commerce this week, despite health experts warning there is still too little diagnostic testing, while the White House forecast a staggering jump in the nation's monthly jobless rate.

Colorado, Mississippi, Minnesota, Montana and Tennessee were set to join several other states in reopening businesses without the means to screen systematically for infected people who may be contagious but asymptomatic, and to trace their contacts with others they might have exposed.

Many merchants have voiced ambivalence about returning to work absent the prerequisite public health measures authorities have advocated.

"I would stay home if the government encouraged that, but they're not. They're saying, 'Hey, the best thing to do is go back to work, even though it might be risky,'" Royal Rose, 39, owner of a tattoo studio in Greeley, Colorado, told Reuters.

Rose said she was reopening her shop after closing a month ago, not because she wants to but because bills are piling up and she feels she has no choice.

Georgia, Oklahoma, Alaska and South Carolina have already forged ahead to restart their economies following weeks of mandatory lockdowns that have thrown nearly one in six American workers out of their jobs.

Public health authorities say increasing human interactions and economic activity now – without the means to do so safely – will only backfire, sparking a new surge of infections just as social-distancing measures appear to be bringing coronavirus outbreaks under control.

Medical experts say strict adherence to business closures and stay-at-home orders imposed over the past several weeks by governors in 42 of 50 states have worked to level off rates of hospitalizations and admissions to intensive care units.

Still, the number of known U.S. infections climbed higher on Sunday, topping 960,000 as the number of lives lost to COVID-19 – the highly contagious respiratory illness caused by the virus – surpassed 54,700.

The continuing rise in the number of U.S. cases has been attributed in part to increased diagnostic screening. But health authorities also warn that testing and contact tracing must be vastly expanded before shuttered businesses can be safely reopened on a wide-scale basis.

The economic fallout from the unprecedented social distancing requirements has been devastating.

Business shutdowns have led to a record 26.5 million Americans filing for unemployment benefits since mid-March, which means that about one in six American workers has now lost their jobs, by far the worst string of layoffs on record.

The data confirms that all the jobs created during the longest employment boom in U.S. history were wiped out in about a month as the novel coronavirus ravages the economy. The economy created 22 million jobs during the employment boom which started in September 2010 and abruptly ended in February this year.

The nonpartisan Congressional Budget Office predicted on Friday that the economy would contract at an annual rate of nearly 40% in the second quarter. Retail sales, homebuilding and consumer confidence have all cratered.

Even next year, the CBO forecast calls for an unemployment rate averaging above 10%. Before the pandemic struck, the U.S. jobless rate was hovering at a 50-year low of 3.5%.

"I think the next couple of months are going to look terrible," Hassett said. "You're going to see numbers as bad as anything we've ever seen before."

The U.S. Congress has already approved $3 trillion in coronavirus relief in a show of bipartisan support for laid-off workers and an economy in free fall.

Lawmakers are now poised for a battle over federal assistance to state and local governments whose budgets have been shattered by a plunge in tax revenue even as they have had to take extraordinary measures during the outbreak.

New York City needs $7.4 billion in federal aid to offset economic losses from the coronavirus, its mayor said on Sunday.

"If New York City is not (made) whole, it will drag down the entire region, and it will hold up the entire national economic restart," Mayor Bill de Blasio, a Democrat, said on the Fox program "Sunday Morning Futures."

Against a backdrop of scattered protests across the country calling for stay-at-home orders to be lifted, some of the states hardest hit by the public health crisis were taking a more cautious approach to economic reopenings.

New York state, the U.S. epicenter of the pandemic, reported 367 new deaths on Sunday, its lowest loss of life in a single 24-hour span since March 20, but has extended its business restrictions through mid-May.

Democratic Gov. Andrew Cuomo said construction and manufacturing would be the first workplaces permitted to reopen and could restart after May 15 in the upstate region with certain precautions and if cases continue to decline.

By and large the states forging ahead with reopenings this week are concentrated in the South, the Midwest and Mountain West, where outbreaks have been far less severe than in the Northeast. Most are led by Republican governors.

Montana, which reported three new cases on Sunday, is allowing businesses to reopen Monday if they limit capacity and practice social distancing, while Minnesota is clearing the way for 80,000 to 100,000 workers in industrial and office jobs to return to work on Monday.

In Colorado, Democratic Gov. Jared Polis has given the green light for retail curbside pickup to begin Monday. Hair salons, barbershop and tattoo parlors can open Friday, with retail stores, restaurants and movie theaters to follow.

Even within states, the lifting of restrictions may vary from place to place. Denver, for example, extended stay-at-home orders to May 8, but city dwellers can drive to a nearby county for a haircut. Georgia, on the other hand, has prohibited any local measures stricter than the state orders.

Opinion polls have generally shown a bipartisan majority of Americans want to remain at home to protect themselves from the coronavirus, despite the impact to the economy.