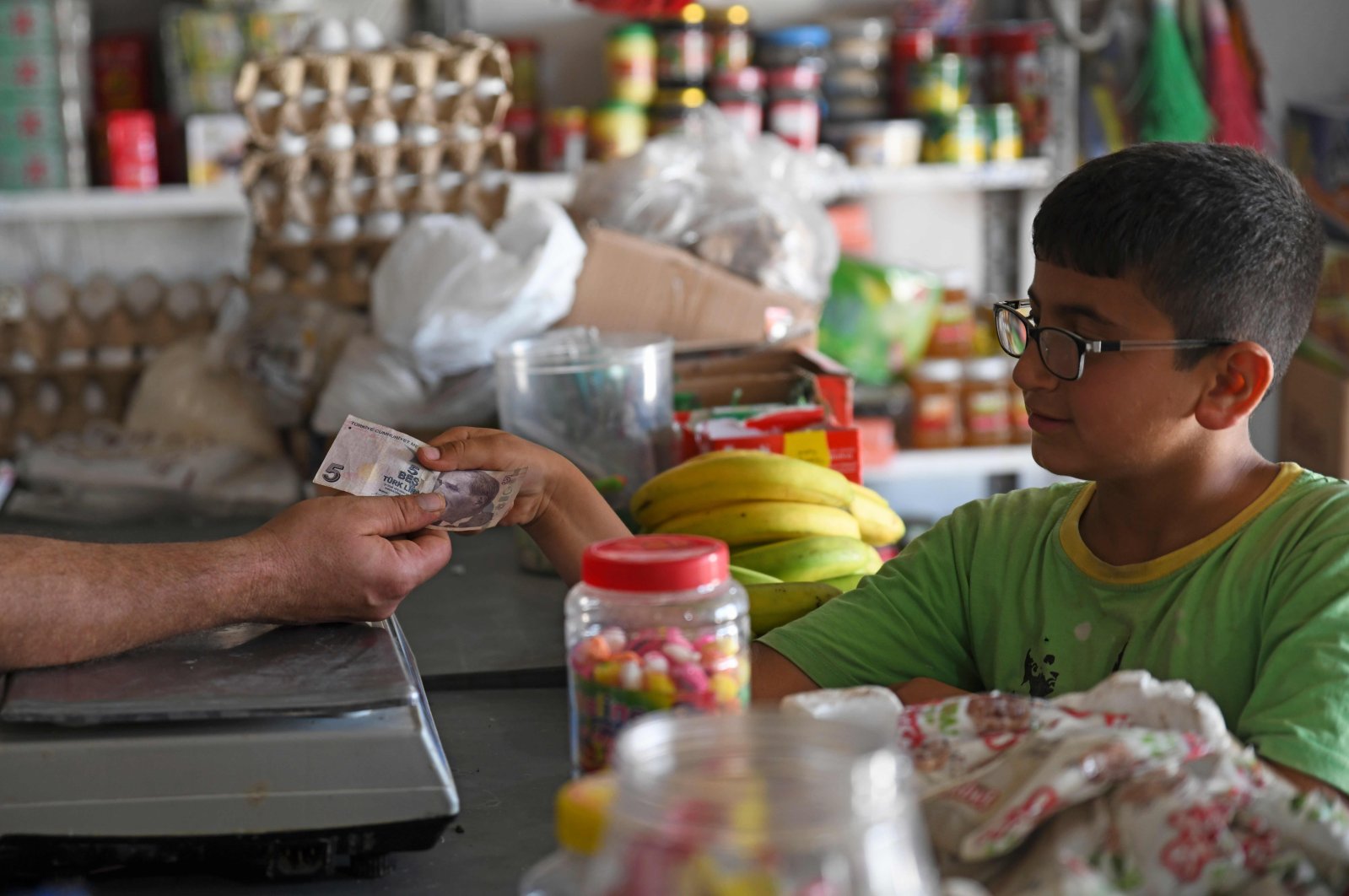 A boy pays a merchant with a Turkish lira banknote at a shop in the town of Jinderes, in the Afrin district of northwestern Syria, June 10, 2020. (AFP Photo)
by DAILY SABAH Jun 11, 2020 1:36 pm
RECOMMENDED

Several regions in northern Syria have reportedly been switching to using the Turkish lira amid uncontrolled devaluation of the Syrian pound and huge hikes in the prices of goods and commodities, which sparked unprecedented protests.

Turkish lira notes were already in circulation in some of the areas in northern Syria, which had been liberated from terrorist organizations by the Turkish military and Syrian opposition groups. Coins are said to have started coming in from Turkey over recent days, with photos circulating on Twitter and showing coins in what was said to be a branch of the Turkish Post and Telegraph Organization's (PTT) in the northwestern Azaz district.

“In order to protect citizens' savings due to the rapid depreciation of the Syrian lira, we intensified our negotiations with the relevant Turkish authorities and took the first step in the process of launching small TL banknotes, which are vital in daily life, in the north of Syria,” Abdurrahman Mustafa, head of the Syrian Interim Government and the Syrian Turkmen Assembly, said on Twitter.

“Confirmed by 4 sources: Turkish-controlled areas in Syria are switching to using the Turkish lira, after coins were brought in from Turkey to allow for this move (notes were already in circulation). This will protect locals from the rapid depreciation of the Syrian lira,” Elizabeth Tsurkov, a fellow in the Middle East Program at the Foreign Policy Research Institute, wrote on Twitter.

Tsurkov said the move would further reduce the value of the Syrian lira due to reduced demand for it “since about 1.8 million residents of Turkish-controlled areas stop using the currency. Idlib's 3 million residents will likely follow suit due to the availability of coins.”

“More Turkish lira coins continue to arrive from across the border into Turkish-controlled areas of Syria as the region shifts away from the incredibly unstable Syrian lira,” she noted, posting a photo which she said was taken in a PTT office in Azaz.

Referring to Tsurkov’s posts, Charles Lister, director of the Extremism and Counterterrorism Program at the Middle East Institute, tweeted, “#Turkey was set to do this anyway, but I'd bet #Syria's recent economic collapse accelerated the transition to TL.”

Hüseyin Bozan, director of Turkmen Agency, confirmed that the PTT branch in Azaz started to launch coins into the market after the decision of some local councils to use the Turkish lira instead of the Syrian lira in the region, which was liberated after Turkey launched the Euphrates Shield anti-terror operation against the Daesh terrorist group in 2016.

“After coins are launched into the market, everything in Azaz will be priced in TL,” Bozan said on Twitter.

Besides Euphrates Shield, carried out by the Turkish military and the Syrian National Army (SNA), Turkey also launched three anti-terror operations – Olive Branch in 2018, Peace Spring in 2019 and Spring Shield this year – across its border in northern Syria to prevent the formation of a terror corridor and enable peaceful settlement by locals. Operation Olive Branch cleared northwestern Afrin district of YPG/PKK terrorists, while Operation Peace Spring liberated northern towns of Ras al-Ayn and Tel Abyad from the terrorist group and captured areas along the strategic M4 highway. The most recent operation, Operation Peace Spring, targeted the Bashar Assad regime and its allied militia over their advance in Idlib in violation of a truce agreed upon between Ankara and Moscow.

The SNA, which was formed in 2017, consists of over 22,000 fighters equipped and trained by Turkey.

Besides Azaz, the northern countryside of Aleppo, under the control of the Turkish-backed opposition groups, also witnessed the circulation of Turkish currency as a substitute for the Syrian lira on Tuesday, hours after the Syrian Interim Government issued its decision to circulate the lira in the local markets, North Press Agency reported. Citing unnamed sources, the report said most sectors started pricing their fees in liras, including electricity, internet, gold and even bread. It also noted that the Chamber of Commerce of the local council in the city of Akhtarin in Aleppo on Monday issued circular fixing prices in lira, including daily workers' wages and crops.

The report also said the decision to replace the currency came in a statement from the Syrian Interim Government a few days ago, in which it said it would start pumping Turkish currency into the markets in northern Syria within the coming days in order to maintain the purchasing power of citizens, protect their money and property and facilitate daily transactions.

The value of the Syrian pound has plummeted with dizzying speed in recent days on the informal market, sending prices skyrocketing, shuttering shops and sparking unprecedented protests.

In recent days, the value of the Syrian pound on the black market has started to tumble even faster from one record to the next. From Saturday to Monday alone, the exchange rate soared from 2,300 pounds to more than 3,000 pounds to the dollar, more than four times the official rate of around 700. It hovered close to 3,000 on Wednesday. Before the conflict, it stood at 47.

Syria has grappled with an economic crisis compounded by Western sanctions, a coronavirus lockdown and a rapid devaluation of the local currency. Analysts have said the recent spike is likely due to worries ahead of the introduction of new U.S. sanctions beginning June 15.

Assad now faces the toughest period of his rule during the course of the nine-year civil war in the country as a collapsing economy, a rift within his family and rising tensions with his key ally Russia are all threatening his already fragile regime. Even before the latest devaluation, food prices in the country, where the vast majority live in poverty, have risen by 133% since May 2019, according to the World Food Program (WFP).

As a response to the criticism, however, the regime refuses to take responsibility and points at the U.S. and its sanctions as the main causes of the concerning situation. After the Assad regime last week called U.S. sanctions against the country “economic terrorism,” the United States responded, saying that it was the regime’s destructive war against its own people and the targeting of vital facilities that wrecked the country’s economy.

Syria's war has devastated the country's economy since 2011, plunging 80% of its people into poverty, according to the United Nations. Despite relative quiet in the country's remaining battlefields, early 2020 has only seen the situation worsen. Much of the economy in regime-held areas shuttered in March to prevent the spread of the pandemic.

The U.S. Embassy in Syria last week declared its support for the country's people protesting the rule of the Assad regime.